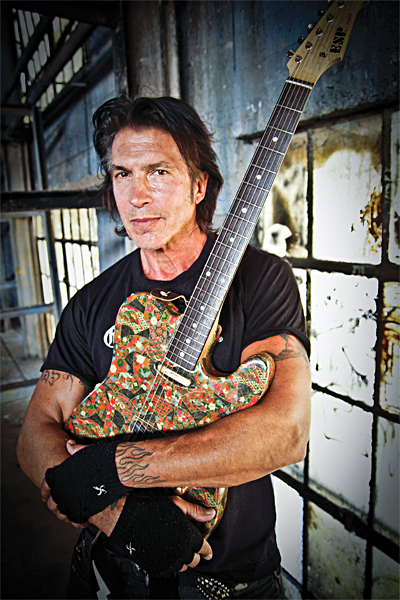 Creative chemistry is an under-discussed topic when it comes to a successful collaborative effort. With the right people, sparks can fly and the good stuff is born. George Lynch’s partnership with Korn drummer Ray Luzier and King’s X bassist Dug Pinnick is one such collaboration. It brought out inspired elements within his playing never heard before in Lynch Mob or Dokken, and it’s not lost on this veteran guitarist. The project, called KXM, has generated quite a buzz within the heavy rock community. Lynch sat with VG to talk about it.

Did you have any idea how great KXM would turn out to be?
It was a complete Hail Mary. Just go in the studio, live there – bring your sleeping bag – bring your amp and guitar, and see what happens. We did 10 songs in 13 days. Our rule was, “No outside songs.” If you have some ideas, forget about it. We just made up new s**t. Nothing we’ve thought about before.

It kind of hurt me at first because I had some good ideas and riffs kicking around on my iPhone. They just started doing s**t, and I started doing s**t, and it turned into songs. We were set up to track and rehearse all in one room, then we’d turn on the mics when we had an idea, and start tracking until we got it right. Then we did minimal overdubs. One of the songs went to Japan as a bonus track, which is actually a cool song I wish was on the record.

It sounds like you guys were tough on each other.
Ray was the disciplinarian. The thing is, when we got into a room together, it was jamtopia. We were coming up with so much stuff that we didn’t need any other ideas. The ideas were flowing like wine (laughs).

The setting brought things out in your playing that your fans have never heard before.
That’s because I was playing with Dug and an ambidextrous, tribal, technical drummer. It’s something I don’t get to do in Lynch Mob. The way I play guitar is percussive, which, on one level, is the same way a drummer thinks. I’m always thinking of beat placement with my note and playing off the tempo. It’s like this infinite circle; in my minds eye, I imagine the drums are syncopated off of what I’m doing, and then I’m doing that again. It just keeps revolving and going around. I don’t think I’ve ever played with a drummer who’s done that before. I was able to do things I’ve never been able to do with other guys.

How did you guys get together?
I’ve known Ray for many years, just running into him. I knew Dug a little bit. We played a show together a few years ago at South By Southwest. We were hanging out in Ray’s studio and talking about the idea of playing together. I was dedicated to the idea that I was going to do everything I could to make this happen. Ray was right there with me. Dug was a little more relaxed about it. He’s been around the block and I sensed he was cool with it if it happened.

Once we started playing and produced something, I could see the light go on in everybody’s eyes. The spark and enthusiasm continued to grow as the days progressed, and that was very gratifying to me. I just focused on making sure that we were productive and that I was putting in my best input. We had 10 days to get in and get out and make a statement.

What kind of rig did you use for KXM?
I used a variety of things. Basically, it was always two amps. Half of my core rig is a modified Lynch Box by Randall with 4×12 cabs and Celestion Lynchback speakers. The other half of my rig would sometimes be a Friedman Dirty Shirley through Marshall or Hiwatt cabs. I also used a little Fractal Axe-Fx II here and there.

Guitar-wise, I used my ESP Tiger, my ESP Tele, and my LTD. I used my ESP Super V when I needed that Les Paul/mahogany low-end chunk. That’s the one I used to get that toggle switch sound on “Do It Now.” It’s a modified Flying V with a P-90 in the neck and a PAF-style humbucker in the bridge that I made myself.

What are your plans for the future of KXM?
It really is dependent on the commercial success of the project. We’re being cautiously optimistic. We really want to go back in and make another record.