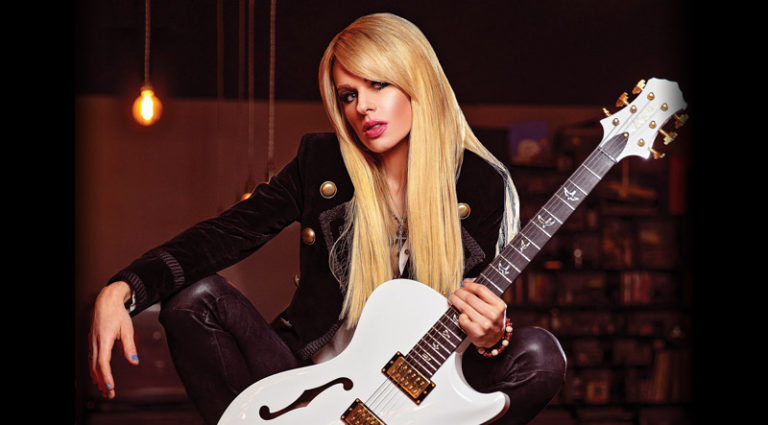 On Orianthi’s latest album, O, the fierce guitar slinger injects mass quantities of blues-rock fury into a contemporary pop-music setting. While this may seem like textbook marketing to enter the mainstream, in reality it’s one of the pitfalls of being a music lover and an eclectic.

Orianthi is a Santana disciple who has worked with diverse artists like Alice Cooper and Michael Jackson. For her, music is not about labels.

Your guitar sits in a variety of contexts. Are you searching for your lane?
I’m inspired by different genres of music. I grew up listening to a lot of blues albums and a lot of country music. My mother loved pop. I loved Jimi Hendrix, and she was into Tom Jones, Michael Bolton, and Motown. Growing up, it wasn’t about, “What’s a good genre?” It was, “What’s a good song?” What makes you feel something? When I make a record, I’m going with a feeling. It doesn’t matter if it’s prog, rock, or blues. My mind is open, my heart is open, and I’ve always been that way. I’m a huge fan of music. I’ve worked with Alice Cooper, Steve Vai, Dave Stewart, Carrie Underwood, and Michael Jackson. They’re all different. Every record I make is like a painting. They’re all going to be different, and I want them to be different.

There were some negative comments regarding your new Gibson signature SJ-200. How did that affect you?
Some people get weird. I’m just trying to bring people together. That’s the magic of music. It had just come out and people on social media were arguing about my guitar playing. “She’s not a good guitarist!” “She’s not a blues player!” “She’s not a rock player!” I got all kinds of insults, hate messages, and all this weird s**t.

I’ve experienced weird comments before. You expect that as an artist because you’re putting yourself out there, but this was beyond. The journey is not easy for any artist. I’m just doing my best. You don’t have to like what I do, but it threw me a bit. As artists, we’re all pretty sensitive people. I tried to shut it out, but I have to tell you, it was a most bizarre situation.

I’ve received a lot of love, too. I want to inspire more kids to play the guitar and help create instruments that people don’t want to put down. Working with Gibson and PRS is a real honor, and I’m very lucky. I’ll also be working with Orange amps. I don’t take any of it for granted. I feel very blessed, but it’s a strange world we live in (laughs).

What’s different about your signature SJ-200?
The people at Gibson created something really special. It’s like having my favorite electric-guitar neck on an acoustic body. The way the pickups are balanced, and the overall sound allows me to play fast. It’s a comfortable and cool-looking guitar. The pickups have a little more midrange, so it’s great for solos and has a full-bodied sound. A lot of acoustics can sound thin when you crank them up, but this one has a real rounded sound and definitely cuts through. With the LR Baggs pickups, you can really experiment. The whole guitar is well-balanced, but very different from your normal J-200.

It looks huge on you.
I played one at the studio in Montana. Someone said, “Isn’t that a little big?” And I was like, “Yeah, but Elvis played one (laughs)!

Anything new with you and PRS?
We’re packaging some black Custom 24s with lessons. I’ve been told I’m a terrible teacher (laughs); I just want to interact with people and have fun. When I first picked up the guitar when I was six years old, it brought me such joy. It wasn’t easy when I was young, and I got picked on a lot. I had to block it out and continue on.

It made you want to do good things.
I want to encourage people to pick up the guitar and write songs, even if it’s just a hobby. I don’t understand the whole negative thing because I’ve never been that way. We all have s**t we have to deal with for whatever path we choose in life. I want to promote peace and unity and coming together; that’s what my job is as an artist. Whatever you put out in the universe comes right back at you. We’re all going through a tough time, and it’s putting everyone in a tough position. Taking care of each other and promoting positivity is the thing that will help humanity.