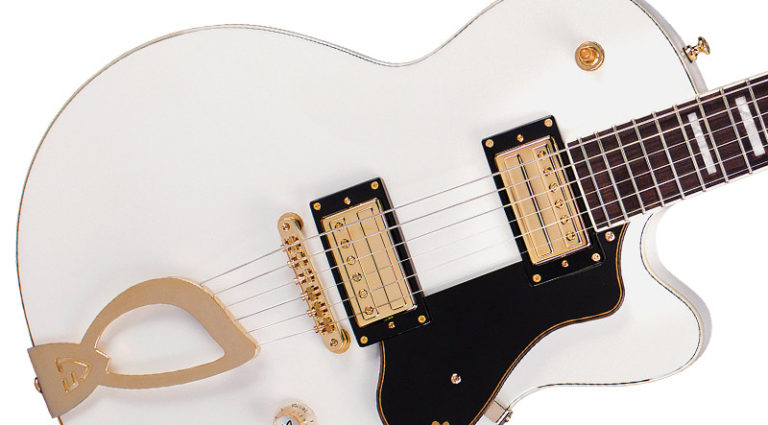 Since its arrival in 1954, the chambered Guild Aristocrat and it’s later solid cousin, the Bluesbird, have offered an alternative to the single-cutaway Les Paul and Gretsch Duo-Jet. Decades later, Guild’s modern HH model offers a twin-humbucker, carved-top axe with upscale looks and special features.

A beefy but comfortable neck profile sits between a C and D shape, perfect for grabbing big chords. Like a Les Paul, it has a considerable heel, so despite having 22 frets, it’s more conducive to playing below the 18th. Those medium-jumbo frets feel smaller in relation to the large neck profile, creating something of a “fretless wonder” effect.

In hand, it’s a welcome relief to those seeking a lighter guitar – tipping the scale around eight pounds. It also offers an airier tone than a solid-body, delivering more vibe and resonance than you might expect, so feel free to dive into those AC/DC and Who riffs with glee.

The HB-2 humbuckers are full-sounding, but if you pull up the individual Volume knobs, you’ll find a coil-split circuit to deliver more vintage tones. It’s not Fender twang, but more like a semi-hollow-body or something with P-90s.

The Aristocrat HH is a very likeable axe and a welcome respite from back-breaking single-cuts. If you want to make a mark outside the norm, it covers a lot of ground thanks to the coil-splits, from clean and full to balls-out rock. And then there’s that classy, uncluttered look, which will immediately make you stand out from the pack.