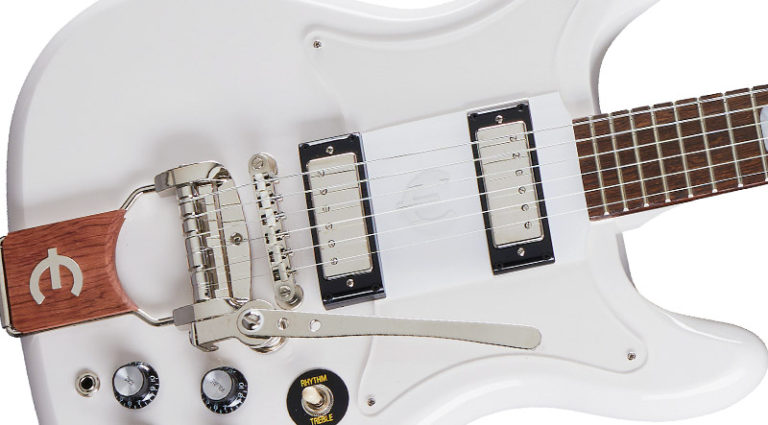 The original Epiphone Crestwood was built at Gibson’s Kalamazoo factory, alongside Les Pauls and other ’50s classics. A double-cut solid-body, it appeared a full three years before that other double-cut legend, the Les Paul SG.

Epiphone’s new version of the Crestwood is a cool tweak of the original brought to modern specs, but retaining an authentic garage-rock persona.

The Crestwood has a similar shape to the also-reissued Coronet and Wilshire models, but with Epiphone Pro mini-humbuckers instead of P-90s, and a LockTone tune-o-Matic bridge with Tremotone vibrato. It has a mahogany body and neck with a laurel fretboard and a neck scale of 24.7″– a hair shorter than Gibson’s standard 24.75″. The body is light, with a slightly beveled edge and full-access neck heel. Look for Epi’s new “Nashville” headstock, “bikini” logo plate, button tuners, and large oval fretboard inlays.

Plugged in, the Crestwood is a resonant plank. Its C-shaped neck has a full profile and may remind you of an SG, as will the array of knobs on the body. Tone-wise, it has an aggressive bark, ready for your feistiest licks, much like an old Special or Les Paul Deluxe.

With vintage looks, modern hardware, Gibson-approved tone, and a fast neck, the Epiphone Crestwood are both hard to dislike and easy on the wallet. It’s a blast of garage rock and roll.