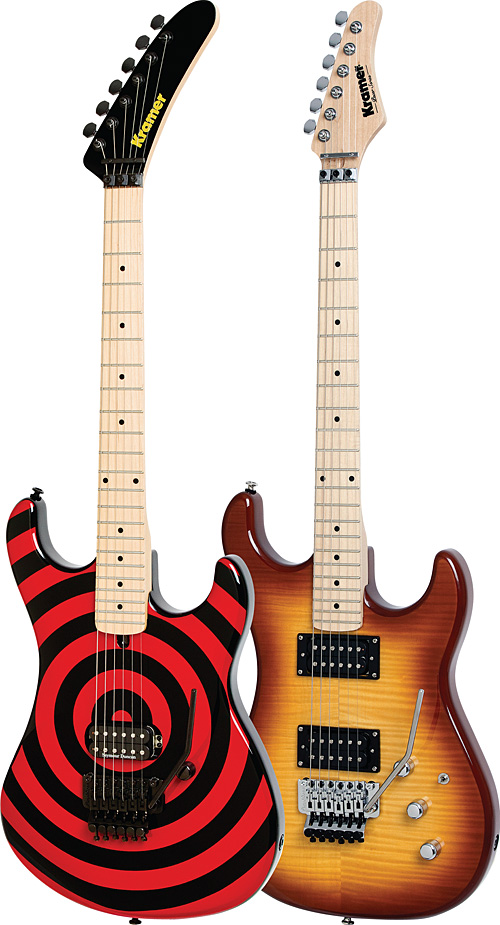 It’s hard to think of ’80s guitars as vintage, but since all things get older, the guitars of the shred generation have indeed acquired a certain patina. And of the many wild guitars of that epoch, arguably no other manufacturer exemplified the decade more than Kramer. At one point, they were the top-selling guitar line on the market and, now with the re-introduction of a couple classics (via their new owners at Gibson), Kramer’s presence may again be felt among big-hair shredders and more.

Harkening back to the Reagan era, Kramer has just introduced the 84 and the Pacer Vintage models. The 84 is the modern-day version of the Baretta models made famous by a number of famous players, including one who used a certain bright-red version embellished with taped stripes (you know who you are!). The 84 carries some of that same spirit with its straightforward approach. The body is maple and sports the same minimalistic approach as the original, with a single Seymour Duncan JB humbucker, Volume knob, and a Floyd Rose. A push/pull pot selects series or parallel, keeping to this guitar’s theme of function over form.

The meat-and-potatoes philosophy continues up the maple neck and fingerboard, with its dot inlays. Like the original, the 22-fret ’board has a 12″ radius while the neck has a 251/2″ scale topped with a classic painted “hockey stick” (a.k.a. “banana”) headstock.

Kramer’s new Pacer Vintage is a reissue with modern upgrades. Like the 84, it has a maple body and neck. Its headstock is more compact and has a natural finish. The Vintage is offered in Orange Burst with tiger graphics for a full-out ’80s vibe, or the more-refined Honey Burst with flamed-maple-veneer top. It uses Seymour Duncan JB and JN humbuckers controlled by a three-way mini toggle and the same push/pull knobs, along with a master Tone.

The 84’s playability was very good up and down the neck. The JB was a great choice, and adds warmth that some original Kramers simply did not have. One of its best sounds came from a cleaner tapped setting that would work very well for country chicken pickers, believe it or not.

The Pacer Vintage takes it up a notch in terms of versatility and tonal quality. Its notes are even and full in every setting, and its all-maple build helps it deliver greater note articulation. Yes, there is a bit of heft to both instruments given the amount of maple, but, much like a good Les Paul or vintage Gretsch, tone goes a long way toward negating a player’s attitude toward the weight of an instrument.

The folks at Kramer are striving to revive a line to some of its former glory. If these two instruments are any indication, the company is on track. Both guitars rock hard, sound ferocious, and might have you wondering where you left the hair mousse and Wayfarers!