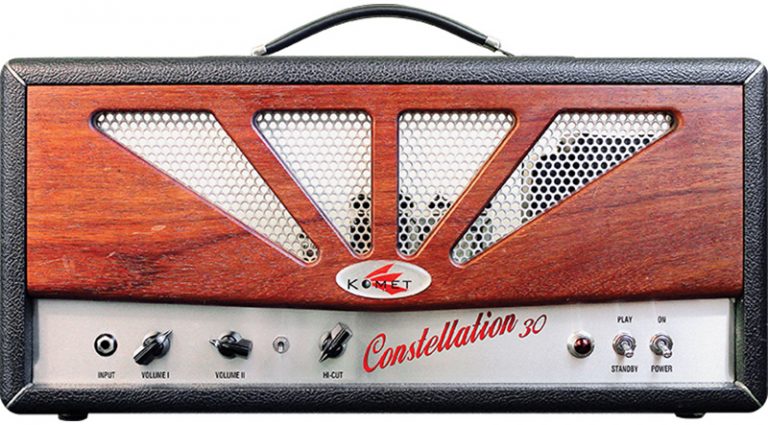 Amid the general run of vintage amps we have explored in this space, the occasional “modern classic” has proved itself worthy through sheer quality of design, uniqueness of tone and/or features, outright popularity, or pure funkiness of aesthetic – both external and internal. The Komet Constellation qualifies on three of four counts.

Not enough were ever built to give it a fair run in the popularity stakes, but that in itself speaks to the uniqueness of this amp; designer Holger Notzel and main tech Michael Kennedy very consciously chose an obscure preamp tube for this amp, which just about made it obsolete right out of the box, and applied it to an entirely original design that at first encounter is likely to send many amp nuts spinning in double-take, then reeling in disbelief once they’ve played the thing.

With just three knobs and no actual tone controls in the traditional sense, the Constellation looks an oddball inside and out, but it grinds out one of the fiercest, thickest, richest, most dynamic guitar tones you’ll ever encounter.

Komet is the boutique-scale amplifier manufacturing arm of Riverfront Music, which opened in Baton Rouge in 1998 as a guitar/amp repair shop. In many ways, Komet is viewed as an heir to the work of the late tube-amp guru Ken Fischer, of Trainwreck Circuits; after some early Notzel/Kennedy prototypes, Fischer designed the brand’s first official model, the Komet 60 (released in 1999 and still in production). Later, another amp, the Songwriter 30, was based on one of his prototypes for a clean, yet dynamic, four-EL84 model. The Constellation was the shop’s first all-original design, but still reveals some Trainwreck DNA, certainly in spirit and intention, if not directly in circuitry. Which is to say, Komet’s amps are, to a great extent, torchbearers of the Fischer ethos in regard to playing feel, touch sensitivity, dynamics, and breadth of guitar-into-amp expression.

Simplicity is the watchword of the Constellation – but that’s simplicity of signal path; there’s plenty of complexity elsewhere in the amp, and some clever engineering, for sure. Insomuch as it’s a cathode-biased amp with an output stage of four EL84s with no negative feedback, we can put the Constellation in the broadly Vox-ish camp, another tributary of the long-flowing Class-A thing. Something very different, though, is going on in the amp’s two parallel preamp stages (independent channels fed by a single input, but not at all like what’s in a standard “channel switcher”) and pretty much everywhere else, too, it departs entirely from the AC30 topology. The obscure tube hinted at earlier is a 6SN7 preamp tube used in the first of the Constellation’s preamps. The 6SN7 is an octal-based dual-triode with a relatively low gain factor, but an extremely rich tone when used in audio circuits, characteristics that have made it a favorite for audiophile-grade hi-fi preamps. Alongside this, when exposed to excessive vibration, the tube is prone to microphonics and even premature failure, a factor that makes it a tricky sell in a cranked guitar amp. As relayed by Komet’s Mike Kennedy, good new old stock (NOS) 6SN7s were readily available when the Constellation was conceived in the early ’00s. Even so, Kennedy and Notzel tested tubes carefully, and rejected many in the process. As the mid/late ’00s rolled around, suitable NOS 6SN7s became harder to find (and the few new makes available just don’t sound quite as good). Good remaining NOS 6SN7s were often snatched up by hi-fi nuts at astronomical prices when they did come available (curses!), so the Constellation became less viable; only 76 have been built, and while Komet will still make one if pressed, Kennedy and Holtzel hesitate due to the touchy nature of that 6SN7 preamp tube (the two are reviewing the feasibility of redesigning the first channel to suit a different preamp tube).

This near-obsolete tube aside, a big part of what makes the Constellation what it is also has to do with its second channel, which is powered by two series gain stages in a standard 12AX7. This sizzling channel piles on the harmonic overtones as it is cranked up to dish out an utterly addictive rock lead tone when wound past noon on the Volume II knob. The premise is that the player dials in their lead sound with the 12AX7 channel, then fills in juicy, thick lows and mids beneath it with the 6SN7 channel to craft a tone like no other. To clean it up, you simply wind down the guitar’s Volume control, or pick lightly. The result is a sound that touches the very best aspects of many classic “cranked vintage” tones, while not copping anything directly and offering plenty of originality in tone and playing feel for the guitarist who wants to craft their own voice. In addition, the amp has a jack for a footswitch that mutes the hot 12AX7 channel, so you can achieve instant cleans by stomping a footswitch, useful for the player who requires that kind of hands-free change-up. Other than the Volume I and Volume II, there’s just a Hi-Cut control that governs high-end content at the output stage, and a three-way Bright switch that gives two values of bright cap across Volume I’s pot, or none at all.

The padauk front panel is a lovely touch, echoing the hardwood cabs into which Ken Fischer put his Trainwreck amps, but much of the Constellation’s beauty lies within; the laser-cut aluminum chassis houses a circuit that will make most amp enthusiasts weak in the knees, with super high-end pots and other military-spec components helping keep the signal true. From the solidstate rectification and heavy filtering for firm lows and a punchy attack, to the precise wire runs and careful grounding, everything inside the box has been laid out to the end of maximum tone and performance. Ultimately, as simple as it is, the Constellation’s touch sensitivity and depth of voice make it all the amp that many players might ever need, and that in itself makes it a true modern classic.