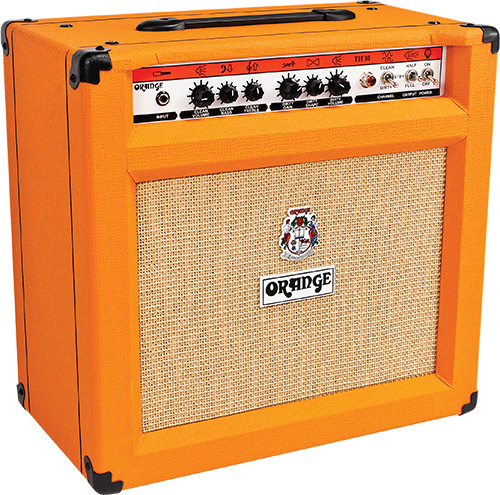 Beyond their eye-catching color, Orange amplifiers have always rendered a distinct sound. Today, the company offers an assortment of amps, and its TH30C combo offers something to guitarists who need upscale tones for small-/mid-sized venues.

Rated at a variable 30 watts output pumped through a Celestion G12H30, the Class-A amp is a lightweight, portable option that merges features from Orange’s Dual Terror, Rockerverb, Thunderverb, and Rocker 30, including serious gain, a muscular clean channel, old-school appeal, and modern flexibility.

The TH30C’s two channels are selected using a front-panel toggle or the footswitch. The Clean channel has knobs to control Volume, Bass, and Treble, while the Dirty channel’s controls include Gain, Shape (midrange EQ), and Volume. Dirty is laid out like a master-volume amp; Shape works with the Volume and Gain knobs to construct varieties of clean, grit, or distortion, from early-’80s Judas Priest to shred-like fury. Its sweet spot is around 10 o’clock, but it can dial in classic Black Sabbath or Alcatrazz-era Yngwie and conveys a refreshing clarity and honk unavailable in many American amps. It easily adapts to single-coils and humbuckers, and while reducing its output does taper top-end and gain, it’s always enjoyable.

The Clean channel offers a range of familiar tones, all thick, rich, and smooth, with just a hint of midrange cluck. With Voume set at 9 o’clock, it offers plenty of clean headroom at stage volume. At 11 o’clock, it yields sumptuous dirty breakup with gobs of pop and sparkle. Pushed a bit further, it has an AC30-meets-plexi spank. Even without a Master Volume control – which would allow a player to dial in crunch at a workable stage volume – the amp offers a luster and brilliance that works very well with effects pedals. Having control over the adjustable power stage is helpful, but not as much fun.

The Orange TH30C is great for setups in medium to small venues. It convincingly covers all musical bases, from country to metal, yet easily fits on the passenger seat of your car.