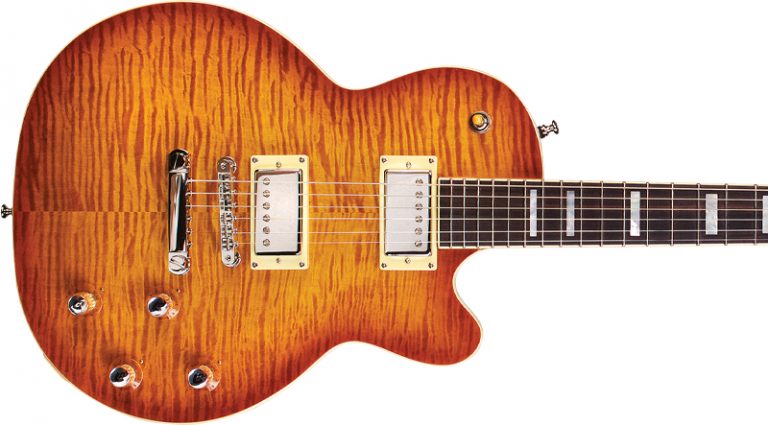 The Guild Bluesbird has a long history that began in the 1950s with Guild’s answer to the Gibson Les Paul –the M-75 Aristocrat, later renamed the M-75 Bluesbird. The guitar appeared in the Guild catalog for years before it was discontinued in the 1970s. It remained off the radar until the mid-1990s, when Guild reissued it with changes to the body shape and certain appointments. Then it disappeared again – until now.

The latest iteration of the Bluesbird is a mashup of features from past models. The body shape is nearly identical to the original M-75 Bluesbird. The traditional crown-like Guild Chesterfield headstock and logo are also employed, but that’s the end of its similarities to vintage models.

The new Bluesbird features a body measuring only 1.5″ at the edge, considerably thinner than older Bluesbirds. A beautifully carved flamed maple top sits on a chambered mahogany body, bound on top and boasting a striking Ice Tea Burst finish (Solid Black is the other color option). The polyurethane finish doesn’t feel thick or sticky.

Scale length is 24.75″, and the bound neck is a sleek vintage soft U shape that will please many guitarists (though those preferring thicker necks may balk). The rosewood fingerboard has medium-jumbo frets expertly installed and finished, and the nut is bone. Grover open back Sta-Tite tuners keep the Bluesbird nicely in tune. The pickups are USA-made Seymour Duncan JB (bridge) and ’59 (neck) models. TonePros locking bridge and stop tailpiece are included – very thoughtful touches.

Bluesbird controls are standard two Volumes and two Tones with clear plastic knobs and a toggle. The test model was shipped sans a pickguard, although a guard is standard on the black version and is included in the gig bag for the sunburst model as an option.

But how does the Bluesbird play?

“Effortless” comes to mind immediately. This is a very resonant instrument that sounds bright and lively unplugged. Single-string riffing was a breeze, the intonation was right on target, and plugged in, a pleasing variety of tones were available: clean, rich mids and snarling high end with added gain on the bridge pickup.

The Bluesbird would be comfortable in almost any musical setting, but make no mistake: this is a rock guitar at heart. The Duncan pickups and TonePros hardware are “built-in mods” that ratchet up the desirability. And with a street price under a grand, the Guild Bluesbird is an extremely viable alternative to similar looking, higher priced solidbodies.