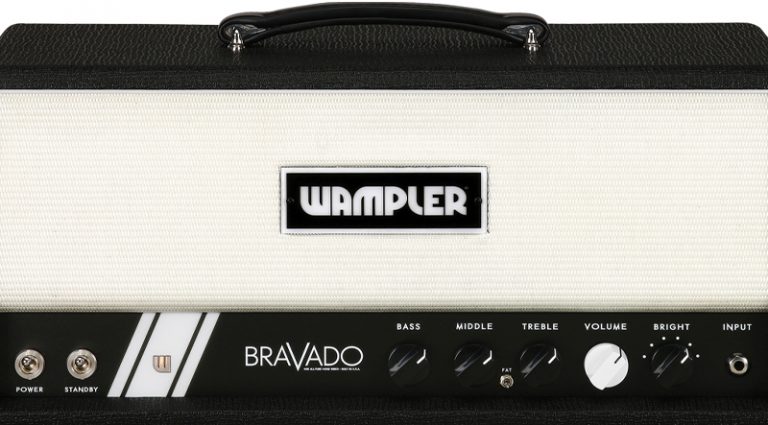 What’s a pedal platform? Nope, it’s not a carbon-fiber Pinarello mountain bike with Shimano shifters and derailleurs. It’s another term for the Bravado 40-watt head designed by pedal impresario Brian Wampler for any player who wants to hear that floor-bound pedalboard climb high like a Pinarello.

Behind the classy if understated exterior details and logo lie 6L6 power tubes and hand-wired circuitry. Power and standby switches are to the left of the front panel, with input to the right. And just one spot over, in white, sits the all-important Volume knob. There are also Treble, Middle, and Bass controls, and 16-, 8-, and 4-ohm speaker loads are selectable on the rear panel. No new bells and… wait – is that a Fat mini-switch? And a six-way Bright switch to give guitarists a sweepable selection of tone coloration to add a little sizzle to the high end?

Indeed, the Bravado is for tone tweakers who can hear pedals that attenuate higher frequencies. Or fans of single-coils who could use a little help in the mids.

Tested with Kent Armstrong single-coil  pickups through a 12″ Celestion Greenback in an extension cab, the pedalboard was subdivided to take advantage of the effects loop. Wampler Ego Compressor, Ibanez Tube Screamer, and Duncan Palladium went into the front input. Brian Wampler worked with Dave Friedman to develop an active effects loop that would deliver an unfiltered sound, or a sound filtered only by the effects, in this case an E-H Holy Grail Reverb, Seymour Duncan Catalina Dynamic Chorus, a Wampler Tape Echo, and a Crazy Tube Circuits SPT for tremolo and related craziness “Clean.” That generic term sums up the unprocessed sound of the Wampler Bravado head, with no Master and no onboard reverb. The stacked pickups liked Bright switch settings 2, 3, and 4 for a natural sound. Position 1, and a flick of the Fat switch, and the solidbody began to behave like a hollowbody.

It’s all about the pedals, though, and the Bravado truly came alive when a Wampler Mini Ego compressor was activated with knobs straight up. Adding tonal color effects, starting with the Holy Grail reverb, the Bravado accentuated the impact of each pedal so that once “normal” settings seemed extreme. The whacky “Fleurb” setting of the Grail became detailed enough to cause mild vertigo. The Catalina Chorus and SPT reacted similarly, also with an apparent magnification of the impact of each pedal. Combining multi pedals only became unmusical when the effects were pushed to their sonic limits. But with typical settings, the characteristics of each individual pedal remained identifiably individual. Reference checks with a 60-year-old Ampeg Jet and a newish Fender Blues Jr. confirmed that the Bravado’s effects loop’s transparent sound outperformed both amps.

The downside to this extraordinary clarity lies in the pedals themselves, especially noisy overdrive, fuzz, and distortion units. Extraneous hum and buzz are magnified, through both the effects loop and the front panel jack. Despite this, the Bravado screamed behind that extra juice, with rolling harmonics on chords and eternally sustained notes. Swapping in an ancient battery-powered DOD Overdrive/Preamp 250, dialing down the Bright switch and Treble control, activating the Fat mini-switch and the compressor, the neck stacked humbucker achieved a “Look, Ma. No rolling off the tone control” “woman tone.”

At 40 watts, the Bravado is certainly club gig-worthy, but it could be the ultimate home dream amp. If those pedals you just couldn’t throw away are in a box in the studio, the Wampler Bravado demands that you take them out and revisit them.