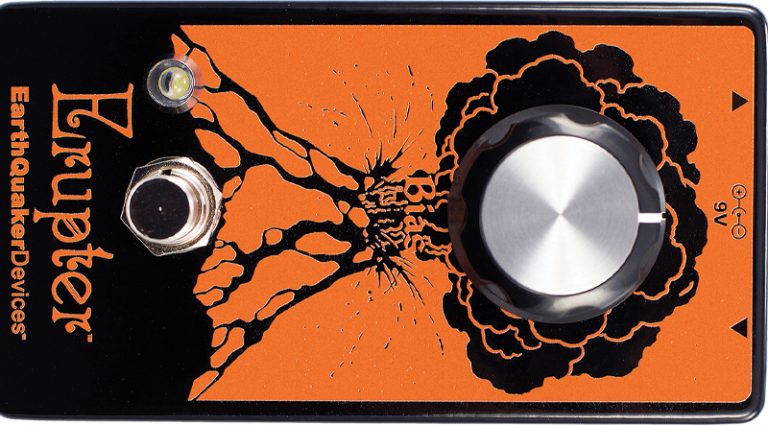 EarthQuaker Devices is one of the most admired pedal builders today, thanks to their original designs that feature tweakable controls which allow players to easily dial in their own unique sounds. With more than forty pedal offerings, the EarthQuaker line covers everything from guitar synth to psychedelic reverb. Their latest – the Erupter – is a fuzz unit featuring an amazing amount of sophistication under its deceptive single Bias knob.

Removing the back from most fuzz units, especially vintage ones, reveals a handful of components. Not so with the Erupter. A look inside this small box provides all the proof needed that the chaps at EarthQuaker put a ton of thought into the circuit design crammed within.

First, there’s the small transformer on the board that mimics the output of a pickup, thus allowing the Erupter to be placed anywhere in your chain while remaining responsive to guitar volume changes. Also, unlike most fuzzes, the Erupter has a buffer to prevent loss on the high end. Other upgrades include a relay and soft-touch footswitch to engage true-bypass rather than the typical mechanical switch that is both prone to popping when engaged and not very reliable.

As mentioned, the Erupter has a single knob controlling the bias to the transistors, with a center detent for the optimum bias setting. Turn it to the right, and it becomes louder and perhaps stronger sounding. Go to the left, and the fuzz begins to spit as it becomes more gated. The tone of the fuzz is strong and forceful, and features a significant volume boost to help keep the effect from getting lost in the mix.

The EarthQuaker Erupter is a powerful fuzz device, with ingenious circuitry allowing, incredible signal-boosting capability, and variety of fuzz tones, all of which conspire to make it a great fuzz contender.