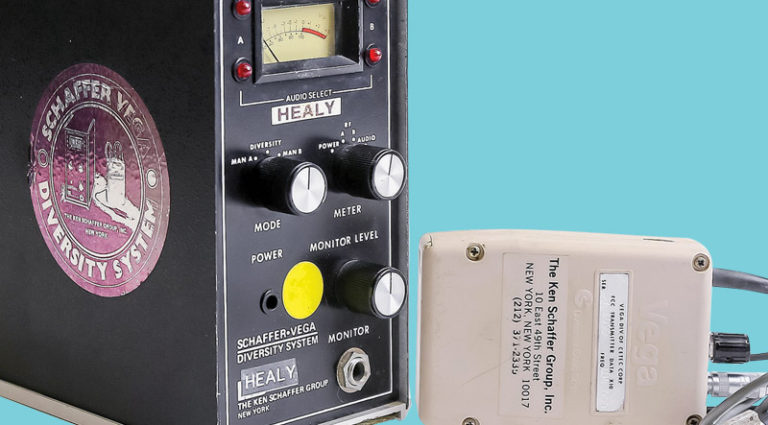 “ The best thing I ever did in the beginning was not use effects,” AC/DC’s Angus Young told VG in his feature interview for the December ’20 issue. And in part, that’s because he didn’t have to: Young had a Schaffer-Vega Diversity System.

The SVDS tower was a wireless system that linked his Gibson SG with his Marshall stack, but it did more… much more.

In 1980, as Back in Black hit the streets, Young spoke to the guitar press, and explained how he got his signature sound.

“On the receiver you’ve got a monitor switch that can boost the signal, and in the transmitter you’ve got the same sort of thing,” he said. “You can really give a guitar hell with ’em. I have used the remote in the studio and it worked really good.”

Young wasn’t the only convert to the SVDS; ELO, Kiss, Jerry Garcia, Lynyrd Skynyrd, Van Halen, and Bootsy Collins all used them. Mick Jagger ran his vocal mic through one. David Gilmour and Pink Floyd reportedly had 20 of them.

Early wireless systems were synonymous with trouble. They were unreliable, sound faded in and out, signals crossed, or they just plain sounded bad. And there were times when a singer hit a song’s emotional high note in silence because they’d moved out of range.

Ken Schaffer witnessed such problems firsthand. A music-industry publicist, he worked with Jimi Hendrix, traveled with the Rolling Stones’ Tour of the Americas ’75, and more.

The idea to create the SVDS came thanks to Lynne Volkman, Schaffer’s girlfriend at the time.

“Lynne was the first female tour manager in rock and roll, doing everyone from the Stones to the Who, James Taylor, Cat Stevens, Lynyrd Skynyrd,” Schaffer remembers. “Of course, until then, tour managers were always guys – who’d bring their girlfriends out for weekends. As I was Lynne’s boyfriend, roles were reversed.”

Schaffer was also an engineer and ham-radio aficionado, and after seeing Jagger on the ’75 tour with a terrible-sounding wireless mic that would fade in and out or pick up police and taxi dispatch calls, he says he was, “Watching, my jaw agape, thinking, ‘I can make a better radio than that!’”

He decided to focus on creating something new, something no one had done – build a wireless system for guitars. “There were more technical challenges to that – it was easier to transmit a voice signal than a guitar’s – so I diverted all my attention to that.”

In 1976, he showed his prototype to Kiss’ Gene Simmons, explaining how the system allowed guitarists a new freedom, but Simmons wasn’t particularly interested. Then, days later, Simmons called from backstage at the Lakeland (Florida) Civic Center; Ace Frehley had been severely shocked that night, after he grabbed a metal rail and completed an electrical circuit with his guitar. Frozen by the charge, he was almost killed, but broke free and fell to the stage. Did Schaffer still have that wireless system available?

“It turned out his takeaway from his visit to my apartment was not the staging possibilities wireless could create, which he missed, but the value of wireless as an insurance policy – to keep from getting electrocuted!” Schaffer told Ultimate Guitar’s Justin Beckner. “So, he ordered a dozen units.” 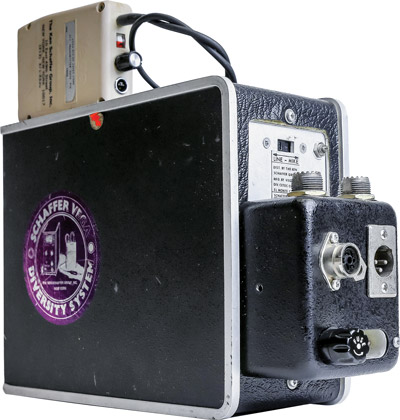 In the ’70s, Schaffer had engineered a line of digital effects released by Eventide Clockworks, including the Instant Phaser, Digital Delay Line, Instant Flanger, and Harmonizer. In ’76, Schaffer’s The Ken Schaffer Group arranged with the California-based Vega Corporation to build the wireless system. The first SVDS arrived in ’77.

The SVDS was not cheap. At its peak, it sold for $4,100. But it was well-built, and units survived decades of use.

The “diversity” noted in the system’s name was key to its success.

“We introduced diversity reception,” Schaffer noted. “Without diversity, a musician would be subject to dropouts as he moved around the stage. True diversity calls for two separate receivers, each fed by its own antenna, with the antennas separated by at least one wavelength. At the frequencies we used – nominally, 180 MHz – a wavelength is about six feet. At a wavelength separation, each antenna is in its own environment and the probability both would fade out at the same time or place is remote. I can’t remember a single call we ever got complaining about dropouts or fading.”

The SVDS overcame all the issues of earlier wireless systems. But it also did them one better because it didn’t limit dynamic range – in fact, it enhanced it. Soon, people like Angus Young were using it in the studio as well as onstage.

“Schaffer’s design incorporated ingenious pre-processing circuits to preserve the integrity of the wireless signal,” explains historian and engineer Filippo Olivieri, mastermind behind the new Replica Tower built by his company, SoloDallas. “Notably, a mirror-image-paired compressor and expander increased the radio circuit’s dynamic range to over 100 dB, which is 35 dB greater than the theoretical maximum that could previously be achieved within the bandwidth limits covering wireless systems by the Federal Communications Commission.”

The SVDS revolutionized rock-and-roll staging, but guitarists also noticed that the system enhanced their sound. And soon, players began using the SVDS live and in the studio just to dial in its tonal colorations, exquisite boost, sweet compression, and lovely edge.

Schaffer describes the effect as “companding,” in which the signal is compressed then expanded. A side effect is enhanced tone.

“Enhancement was due to the compression/expansion and pre-processing, to optimize the signal and make the companding work,” Olivieri explains.

To listeners’ ears, that meant the SVDS boosted low-midrange frequencies, adding clarity and depth to the sound.

“Beyond the staging freedom afforded by Schaffer’s wireless, many A-list players discovered something unintended – the sonic result was pure magic!” Olivieri adds. “The wireless design’s unique pre-processing enriched their signal with copious harmonic content unlike anything they’d ever heard.”

“The truth is, I got bored,” he says. He moved on to a new fascination – TV/communication satellites. Ultimately, only about 1,000 SVDS system were made. Meanwhile, the FCC enacted stricter regulations that outlawed analog wireless systems such as the SVDS. New ones began to take over, and the famous Schaffer sound gradually faded away.

Fast-forward 40 years. Olivieri became obsessed with replicating Angus Young’s guitar sound. He tried various SGs and Marshalls – everything he could uncover that was known to be in Angus’ signal chain. Then he read an interview where Young eschewed all effects except his SVDS. Olivieri eventually tracked down two surviving units and got goosebumps when he heard that Schaffer sound.

He contacted Schaffer about retro-engineering the SVDS. In 2014, Olivieri’s SoloDallas firm launched the Schaffer Tower Replica without the wireless system; you simply plug in and have all those sonic possibilities at your fingertips. In addition, SoloDallas now offers two stompboxes replicating the sound; unit number 0001 went to Angus Young, who now uses two SoloDallas Schaffer Replica Tower units in his rack system (see our review in this month’s “Approved Gear”).