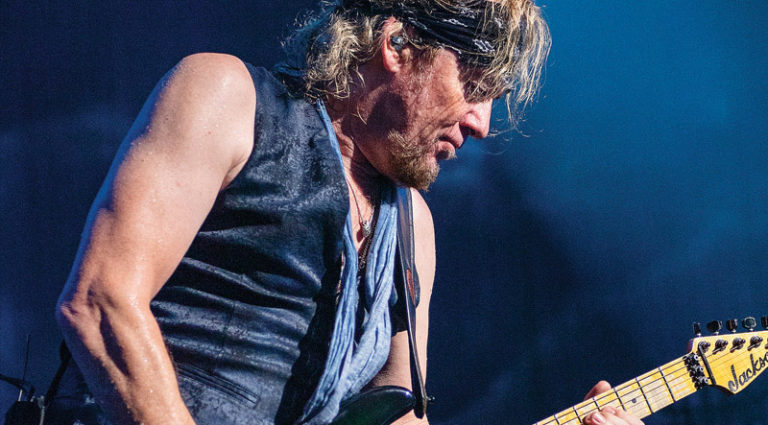 Guitarists usually spend years learning their scales, but Iron Maiden’s Adrian Smith enjoys scales of the aquatic kind. In his new memoir, Monsters of River and Rock, Smith details his love of fishing as a way to relax between mammoth Maiden gigs. VG talked to him about both kinds of scales.

Where did you get the idea to go fishing while on tour?

Maiden’s early drummer, Clive Burr, was an angler, and we started going out, bringing a bit of fishing equipment on the road. There’s a couple of stories in the book about that, like catching carp in Wisconsin when we were on tour with the Scorpions; it was a good way to get away from the madness of the tour. For Powerslave, we spent a solid 12 months on the road in America, Europe, and Japan. So spending a few hours by a river or lake just gave me a chance to chill out.

Have any of your fishing adventures led you to a music store or pawn shop where you found a choice guitar?

On early Maiden tours, we used to go to pawn shops. We had a couple of road crew who were more experienced and would say, “Come on boys. Let’s go and find some guitars.” And I did find a nice Gibson SG in a pawn shop and bought it for a couple hundred bucks. I used it on a few Maiden albums and tours in the mid ’80s. Unfortunately, someone knocked it over backstage and busted the headstock off. We fixed it, but it was never the same.

What year is that first Les Paul you described in the book?

I bought that Les Paul Deluxe goldtop when I was 17 or 18 years old. It was used, so I’m guessing it’s a ’72 or ’73. I paid £235 for it, which is hardly anything now, and I still use it a lot. It stays in tune, plays great, and has a skinny neck for a Les Paul. I don’t like a lot of the Les Pauls with big baseball-bat necks. I also have a maple-neck Strat which is supposed to be from 1955 and sounds amazing. I don’t take it on the road, though; it’s a bit fragile.

You mention Ritchie Blackmore and Paul Kossoff as key influences.

I used to imitate the Beatles with my dad’s ukulele and pretend I was in the band. But it wasn’t until I heard Machine Head by Deep Purple and Free Live with Paul Kossoff and Paul Rodgers that I got excited about the guitar. I thought, “Well that’s definitely what I want to do with my life.” Humble Pie was another of my favorite bands, along with UFO and Michael Schenker, who is not much older than me – I used to see UFO play in London. Then we had North American imports like Johnny Winter and Pat Travers. Also the guys in Thin Lizzy – Scott Gorham, Brian Robertson and, of course, Gary Moore. Lizzy was a massive influence on a lot of us British kids in the ’70s.

You, Dave Murray, and Janick Gers all use Strats or similar solidbodies, often with humbuckers – it’s an Iron Maiden trademark. Why that particular tonal combination?

The main reason I use a superstrat Jackson with a humbucker is because I think it blends in better with the other guitarists. With three players, sometimes intonation can be a problem – if you’ve got three guys playing the same chord in the same position, you’re sometimes going to get a little sourness. But if you’ve got a GoGo tuner and locking vibrato, you can bend the chord and give it a gentle vibrato to make it resonate with the other guitars.

Do you use single-coil tones?

Yes, my signature Jackson has a humbucker and two single-coils. I turn on the neck single-coil for Strat sounds on a couple of songs – “Tears Of A Clown” is very Strat-y, almost like a Stevie Ray Vaughan kind of tone. You can get that if you don’t put too much gain on it and go with that neck pickup to get a beautiful, fat sound. It works well onstage with Dave and Janick, all of us using these Strat-type guitars.

Have Guitar Will Travel 075 – Sam Weber