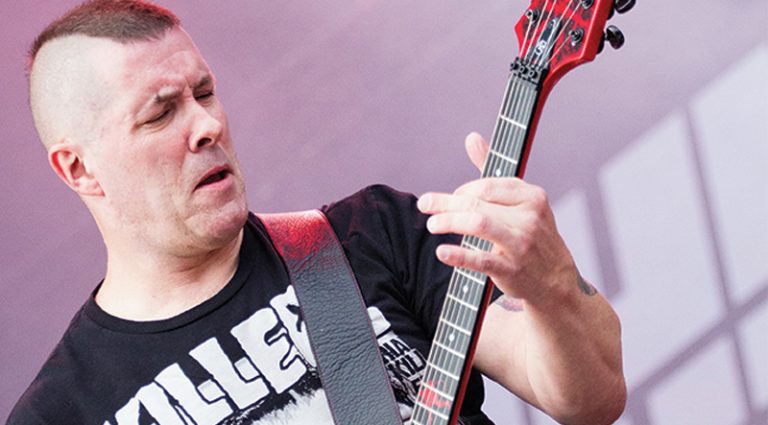 Trends come and go, but Canadian rockers Annihilator always deliver crushing speed metal. Their newest release, Triple Threat, is aimed at the serious fan. We recently spoke with guitarist/vocalist Jeff Waters to learn more about it.

It’s an idea that came when we touring for our last studio record, Suicide Society. There was a break around Christmas, and the A&R guy at UDR Records said they’d be into doing something before the release of the next album. We thought, “Why don’t we grab a concert that already has cameras filming – a festival in Europe, for example. But if we’re going to do it, we don’t want to throw out a boring package.” And he agreed.  So we came up with… I guess Van Halen spawned this idea and I, of course, was the first in line to buy the CD of A Different Kind of Truth with the special CD package that had, I think, four black-and-white videos of them with David Lee Roth in Eddie’s studio – just a casual jam of “Beautiful Girls,” “Panama,” with Roth’s dogs running around and they’re all relaxed and smiling. In the back of my mind, I was always like, “I wish I could do something like that.” So I said, “What if we do something similar – in color?” And that spawned the second-disc idea. We picked some older songs and new songs. I wanted to do it live, like Van Halen had done. We still had one to go, so we said, “We can do a third disc and make it a mini-documentary thing.”

You’ve been Annihilator’s lead singer from time to time, and also worked with other singers.

I started the band in the mid ’80s with a singer friend, and we wrote some songs like “Alison Hell” and a few others that became sort of classics for us. But essentially, I just wanted to be in a band. My favorites at the time were Exodus, Anthrax, Slayer, Metallica’s first albums, and the first albums from Anvil, Razor, Exciter, and Venom. That’s what I was listening to. This was my post-Priest/Maiden/Van Halen/AC/DC/Kiss/Scorpions phase that went into the heavier music.

What happened very quickly was I tried to get the band together and get the right guys, and wanted to practice full-time and I didn’t want to do anything else. So I’d wash dishes at a restaurant, then I’d spend 12 hours a day working on music and trying to learn how these great artists write songs and play solos and rhythms. I got guys, but they just wanted to go out and party. I had a different sort of drive. So I realized I had to write the bass parts and play the bass, write the drum parts, write lyrics, because certain guys weren’t showing up, and I wanted to get this going. That is essentially the whole career of Annihilator. It’s more of a solo project where I’d hire a drummer or a singer to go in the studio, and then the separate part is the album is done and the promotion happens, and I look for guys to go on tour. For me, it was normal to just hire different guys and try to keep singers for a few albums if it was working out, and then I’d move on and try a different drummer or bass player. To outsiders who don’t know the band, it looks crazy, but I think it’s the reason I’m still here.

K.K. Downing has got to be my number one influence. When [Judas Priest’s] Defenders of the Faith tour came and he used the red Hamer V with the white pickguard, that combined with the Balls to the Wall Accept tour with Wolf Hoffmann and Herman Frank, they had the white Flying Vs, and then you had Michael Schenker and his brother, Rudolf, and you had Lips from Anvil.

But the root of that was I had some basic lessons in classical guitar, where you put the guitar – if you’re right-handed – on your left leg and not your right leg. The Flying V actually fit like a classical fits between your legs – so that was a natural fit for me. And the angle of the neck would bend up like a classical guitar would. Then I met the Gibson guys, and they wanted to do a Flying V with me; it’s every guitar player’s dream if a company like Gibson says, “We would like to do your own guitar.” I didn’t see it as a limited-edition, $3,000 guitar. I thought it was going to be something you could put in the stores that kids could afford. They said, “You need to talk to our sister company.” And that became a seven- or eight-year relationship with Epiphone.