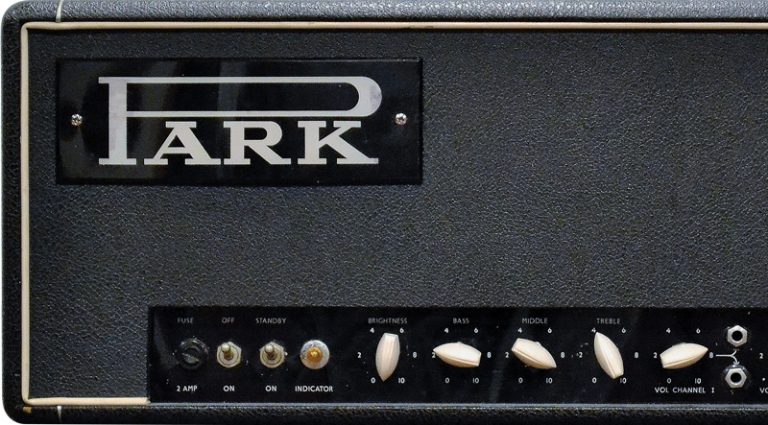 When is a Marshall not a Marshall? When it’s a Park, of course! Though it might not scream “classic rock tone” for the guitarist masses, in the eyes and ears of Marshall aficionados, the name Park denotes a new level of vintage desirability.

The rules of supply and demand apply to the collectibility of Park amps, of course, since far fewer were made than the corresponding Marshall models. But there’s something else to it – that feeling, perhaps, that this is a secret Marshall, with the same heart and soul and fury along with the added caché of being in disguise.

This 1966 Park 45 head is an early example, and presents a fascinating look at how closely Park paralleled its sibling. Later Parks were occasionally used to test mods or tricks, or became clearing houses for leftover components after Marshall models moved to other specs (witness the prolonged use of “lay-down” transformers or a few hand-wired circuit boards in Parks several months after Marshal had gone to printed circuit boards in 1974). This Park 45, though, is a JTM45 in all but name and a few cosmetic tweaks, and likewise one of the most desirable vintage British amps you could lay your hands on.

Park was established to provide amps for Jim Marshall’s pal, Johnny Jones, owner of the Jones and Crossland music store, in Birmingham. Jones’ establishment sold Marshall amps before Jim struck an exclusive distribution deal with Rose-Morris in ’65, so the new “stealth” brand – given Jones’ wife’s maiden name which was already used for other Jones/Crossland house-brand instruments – provided the perfect means for keeping his friend stocked with amplifiers.

Internally, the Park 45 is dead-on ’66 JTM45, but a few twists to its look were required to help it skirt Rose-Morris’ claim to exclusivity.

This one’s owner, VG reader and collector of vintage British amps, Mike Tamposi, notes, “It’s essentially a JTM45. The only differences are the cosmetics and the fact the Volume pot for Channel II separates the two pairs of inputs (positioned together on all early four-input Marshalls).” Tamposi further points out how this amp uses the rare “banana” knobs seen only on the earliest top-mounted Park 45 heads from ’65/early ’66, and “…Park 45s used an amber Radio Spares indicator lamp, whereas JTM45s used red.”

This amp is original inside and out save for the filter capacitors and a few resistors that were changed to keep it gig-worthy. Its chassis is the rather flimsy aluminum used on early JTM45s, and Tamposi says it’s beginning to sag under the weight of the transformers, as most do. To keep it sounding as it should, the amp is loaded with new-old-stock GEC KT66 output tubes, as would have been in it when it departed the Marshall facility in ’66, a Mullard GZ34 rectifier tube, and a mix of Mullard and Brimar ECC83 preamp tubes.

As for “sounding as it should,” the owner reports, “The amp has great glassy tone that stays clean up to almost halfway on the Volume control, then starts breaking up, eventually getting to the classic Marshall snarling and barking. Classic Angus Young tone!”

Anyone who has played a vintage JTM45 or a good reproduction knows it’s a different sonic template than what is considered archetypical Marshall tone. Understandably so, since Jim Marshall, Ken Bran, and Dudley Craven lifted the schematic of Fender’s 5F6A tweed Bassman of the late ’50s to create their first commercial guitar amp. Thus, early Marshalls are differentiated from American tweed 40-watters by only a few components and speakers.

So, while you could lift this Park’s circuit board and control complement and drop it right into a JTM45 of the era, you could also overlay it almost component-for-component into the chassis of a tweed Bassman, from the 820-ohm resistor and 250uF bypass cap that bias and voice each channel’s first gain stage to the cathode-follower tone stack and capacitor values therein, to the configuration of the long-tailed-pair phase inverter (note the control labeled “Brightness” here is the exact same as the “Presence” on the JTM45 and Bassman). Different component brands – yellow Philips/Mullard “mustard caps” in the Park vs. yellow Astron caps in the Fender – might account for slight sonic differences that are then enhanced by the British-made Radio Spares or Drake transformers in place of the American Triad or Schumacher, but the difference is slight in the grand scheme.

Another notable difference is Park and Marshall’s move to KT66s by 1966, after starting with the 5881s in the Bassman; generally, this is heard as a relatively subtle sonic alteration. When compared to the Bassman’s very resonant open-back/solid-pine 4×10″ with Jensen P10Rs, the classic Greenback-equipped birch-ply 4×12″ issues considerably more low-end thump and a distinctive midrange grind, with less of that “American” top-end sparkle. In other words, it sounds more British.

Not to split hairs, but looked at another way, the tweed Bassman, JTM45, and Park 45 share so much DNA it’s little wonder many guitarists conclude that when it comes to a solid, dynamic foundation for a versatile rig, you can’t do much better than this template. But why would any owner dare play a museum piece like this, much less replace original components to keep it functional? “All of my amps have updated filter caps, and I add bias pots to keep them working their best,” Tamposi declared. “They ain’t just for looking at!”