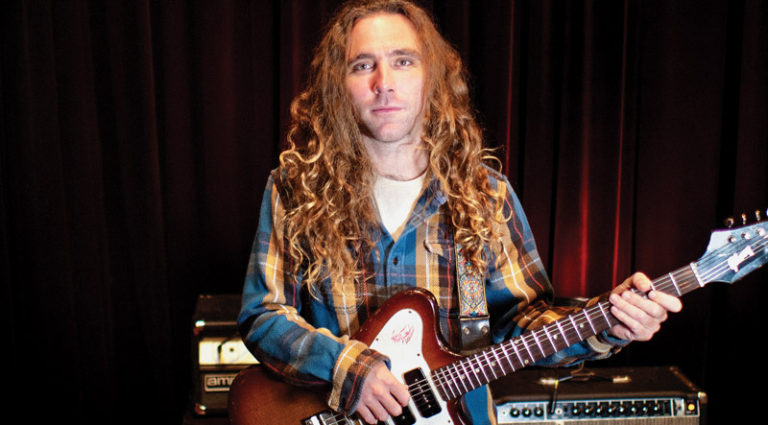 While ’80s metal is past its heyday, the proto-metal of the late 1960s and early ’70s is making a huge comeback, thanks to younger bands re-imagining the saturated sounds of bands like The Stooges and Blue Cheer.

Guitarist Charles Moothart and his band, Fuzz, are at the forefront. Their latest album, Fuzz III, marinates in the hypnotic aggression of ’60s garage with a side of Black Sabbath. Producer Steve Albini was behind the console while Moothart unleashed a symphony of power and passion. The album proves righteous fuzz tones remain alive and well.

Who are your influences?
My influences run across a lot of different music. My dad was a big Black Sabbath fan – both parents were into a lot of good music, so I got turned on to classic rock and roll at an early age. My mother is a huge fan of The Who, so that seeped in early. From the age of 13, I was into The Germs, then getting older and starting bands, it was punk and ’80s hardcore. The ones that stand out are Sabbath, the Groundhogs, and later, jazz and hip-hop.

Why this style of music?
Over the years, I was lucky to have a lot of close friends who also had a lot of different influences. We started bands and explored different things. After spending years playing and trying to push myself to perform differently and explore guitar playing in a different way, drummer/guitarist Ty Segall came in. We wanted to play high-energy rock influenced by The Stooges and Black Sabbath, but also wanted to explore our musicianship. We pushed so it felt like we’re continually learning.

You play some complicated lines and rhythm parts while singing.
Singing is a whole other beast that I’m still wrapping my head around. I try to do more lead-style stuff while singing, and disconnecting those parts of my brain is a fun experiment – letting my muscle memory go on the neck but knowing where I am. It’s an experiment that doesn’t always work (laughs).

Are you conscious that you’re drawing your aesthetic from a specific subgenre?
Oh, yeah. Blue Cheer was huge for me. When I heard it, I said, “This is the stuff I want to try!” I wanted to experiment, freak out, and be totally off the rails while having a good time.

Your fuzz tones are hellacious. What are you using?
My standard pedal is the Death By Audio Fuzz War. I’ve been playing a ’65 Gibson Firebird for the last few years – it has three P-90s. I can’t play anything else now. On some records, I’ve used a ’60s SG that was a gift from my dad and the first nice guitar I ever had. The rig I’m using is a Music Man 130-watt 4×10 combo and an Ampeg V-4 head with a custom-built cab with two 12″ Greenbacks.

How are you running your amps?
Both are on simultaneously and everything is full up and driven at all times. I’ve come to like cleaner tones over time. I’ve learned that 30 minutes into a show, if you’re too dirty, you’re not hearing what you’re doing and you start to overplay. Then you get tired. You have to have a balance.

So, I now have a bit cleaner tone that still breaks up. The Music Man has that midrange distortion I keep trying to dial back. The V-4 has the clarity and low-end so I can feel what I’m doing. These are things I’m still working on every time I pick up the guitar. I started out wanting to bash the s**t out of the guitar like Black Flag, but over time I’ve learned not to burn myself out.

What’s the future for Fuzz?
We’re trying to figure that out. There’s this balance that everyone is trying to keep, where you don’t want to be selfish and get too wrapped up in what you wish you could do. As a defense mechanism, you can’t think too much outside of what is immediately possible. At the same time, you want to stay out there.