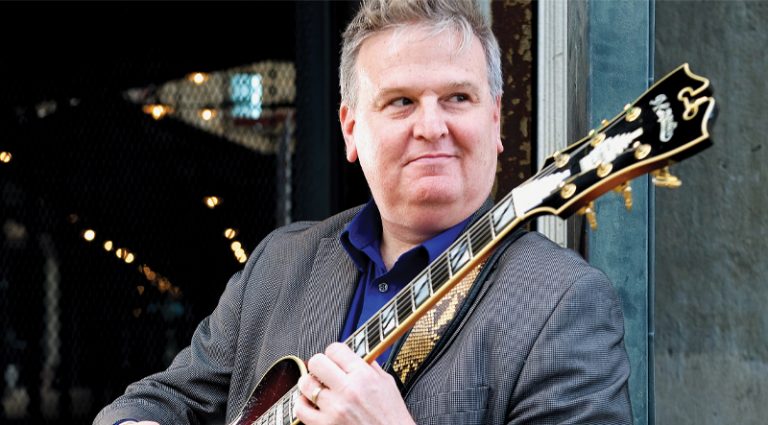 Guitarist Joel Shapira has released a string of fine recordings, but his latest, In Essence, is his first stab at solo guitar. While the concept has been percolating in his mind for quite some time, it was spurred into existence by a meeting with Greg Schutte, who engineered, mixed, and mastered the record.

“I knew of his studio and it had a great reputation. I told him I was thinking about doing a solo record. So, I set up a session with him to make it real. That’s the point where it goes from being an idea you’ve mulled over for a period of time to actually having a commitment.”

The record is a mix of standards and “newer” jazz tunes by the likes of Thelonious Monk, Joe Henderson, Wayne Shorter, and Miles Davis. “There wasn’t a bunch of preparation or anything.  There are tunes I like and know well, so they were always on my mind. The takes on the record have similarities to how I play them live, but there is no guarantee they’ll sound the same the next time I play it. I have a basic idea how I approach them, but I want the song to take the most natural course, depending on the crowd. That’s why the CD is titled In Essence. I think it’s a reflection of what I do on those solo gigs.”

Shapira grew up in a house that had music in it, with stacks of records that he started listening to at the age of six. At that point, he discovered one that most six-year-old kids would likely skip over.

“I was mesmerized by the Mahavishnu Orchestra’s Inner Mounting Flame and a handful of other recordings,” he said. “And I guess I thought that all kids my age were listening to that type of music (laughs). What I figured out later is that the same thing that struck me about that record when I was young continued to have an effect on me as an adult, but obviously with a more-mature understanding of it.”

Later, he was also influenced by the pop and rock of the day; Jimmy Page and Led Zeppelin got him into the guitar.

His turn toward jazz, he said, was a transition that had to happen. He played in high school jazz band and started closely listening to jazz players.

“My teachers pointed me to Joe Pass, and they couldn’t have given me better advice,” he recalled. “Then I saw Jim Hall in concert at about 15. A drummer friend and I went to that show, and from that point on, we wanted to play jazz.”

In 1987, he moved to Boston to attend Berklee College of Music. But, his stay was short. Wanting to play more, he went to New York.

“That was a huge dose of reality,” he said. “I loved New York City, but then moved back to my home town of St. Paul. I felt what I needed more than anything was experience. I needed to play with better players, and fortunately, the Twin Cities is a haven for great players.”

Aside from solo gigs, Shapira now plays in several quartets, his own trio, and he accompanies numerous vocalists including Charmin Michelle, with whom he has played for more than 20 years. He calls her his “greatest musical ally,” and together they’ve released two CDs.

The guitars on In Essence are the same he uses on gigs – a ’69 Gibson L-5, 2000 D’Angelico New Yorker, ’86 Ramirez Concert 180, and a steel-string Martin. He’s also recently acquired a Tele he uses on solo gigs.

For amps, he used a ’68 Fender Pro Reverb that Schutte has in his studio. His gig amps include a Carr Rambler 112 which he calls the nicest jazz amp he’s ever owned. He also likes his Henriksen Bud.

While he stays busy with gigs and teaching, Shapira continues to work on his playing at every opportunity.

“That’s part of being a musician – learning from other players. There are so many brilliant players out there.”