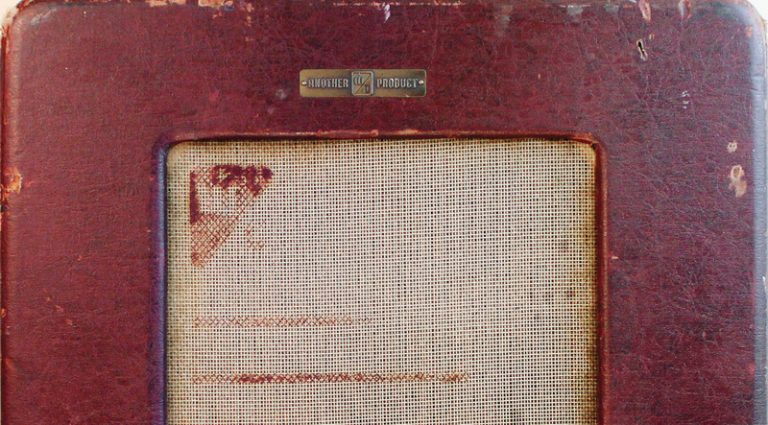 Modified or repurposed amps generally don’t fit into our monthly discussion here, but some are representative enough of a certain standard to make an exception. Witness this gem from 1952.

Designed for general-purpose public address with a microphone or gramophone attached, as often as not you’ll find it reworked as a sweet-sounding tweed-style guitar amp or great harp amp for Chicago blues blowers with a hi-impedance crystal “bullet” mic – both of which have become common uses for this old tube-powered suitcase. For either, this stylish chunk of yesteryear presents an original voice not heard in the typical classic amps, and if you keep an eye peeled for a bargain, you’ll fork out little more than spare change. And it might even sound better than some more-collectible vintage makes of a similar size. 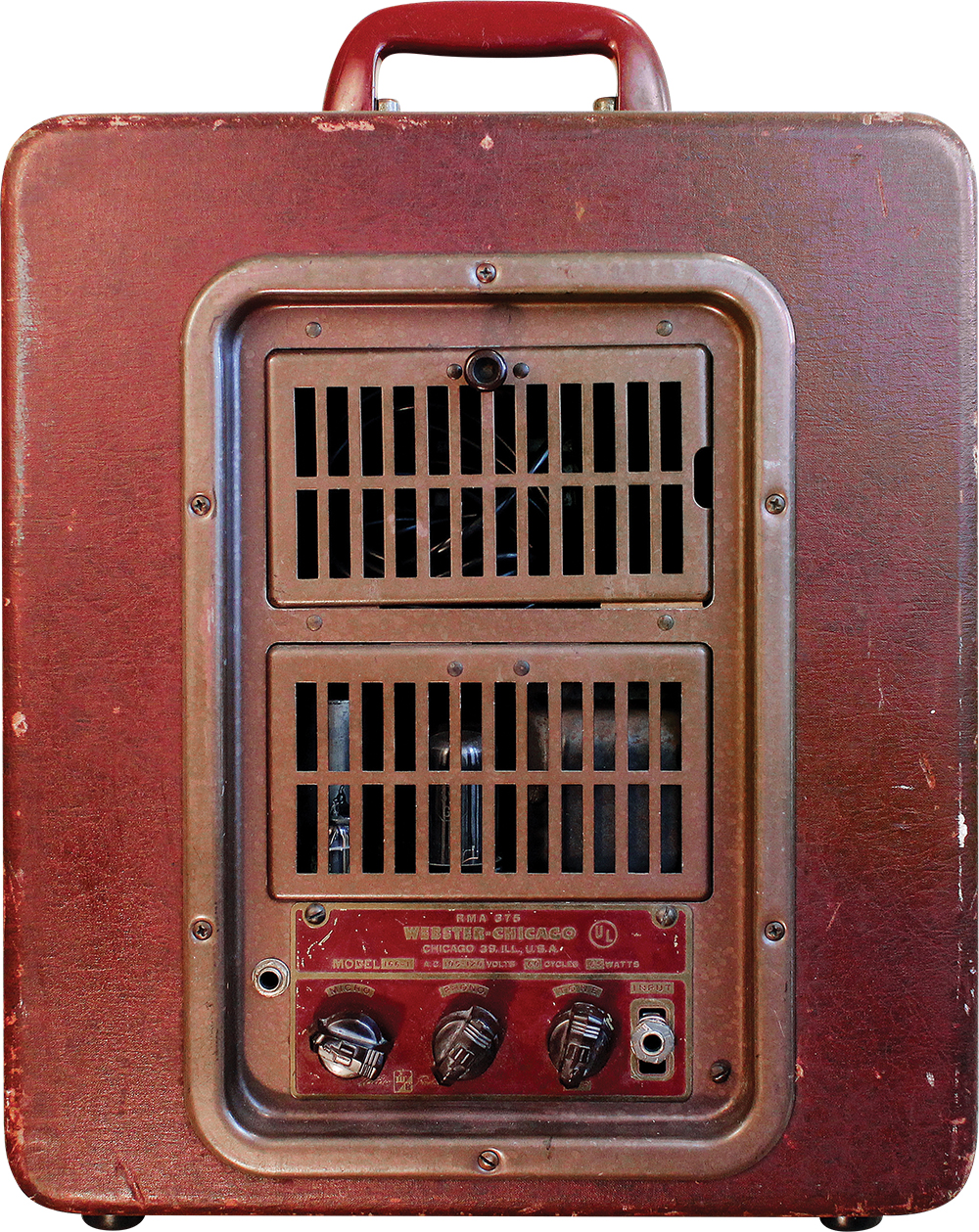 Ostensibly, this amp should be capable of producing more output than it does, but several elements place it among smaller, single-ended “Champ-like” amps than fully qualifying it for the push-pull/double-ended genus implied by its layout. It boasts one 6AT6 and one 12AX7 in the preamp, two 6V6 output tubes, and a 5Y3 rectifier. Dig out that schematic for Fender’s tweed Harvard combo of 1955-’61 and you’ll see the same tube complement. Did Webster-Chicago copy Fender? Of course not; this one was out several years before the 1×10″ combo from Fullerton. But it makes sense that any circuit needing only one preamp gain stage (phase inverter aside) would use a 6AT6 in the front end – a seven-pin, single-triode tube that performs similarly to those in the more common 12A–7 dual-triode family. Examine the Webster-Chicago’s schematic, though, and you’ll see its circuit is also a long way from the Harvard or any other conventional guitar amp of the era.

Though most guitarists who use the Model 166-1 have made a few changes to it, that didn’t mean ripping out the circuit and wiring in, well, a tweed Harvard. There’s a lot to be said for simply enjoying the oddball charms of this thing in as-close-to-original form as can be managed. The amp was designed and built with one signal path laid out for a microphone via one input and a second signal path for line-level source (such as gramophone) via the other input. The latter bypasses the first gain stage and goes straight on to the phase inverter, so the mic input is the one to adapt for guitar, as has been done with this example.

As such, signal enters the 6AT6, then departs via an .02µF coupling cap to that channel’s Volume control. From there it goes to a paraphase inverter comprising the dual triodes of the 12AX7. The amp’s single Tone control positioned between the inverted and non-inverted legs of the signal, post-PI, which makes it not dissimilar to the “cut” control on many cathode-biased British-style amps. The paraphase PI was never known for great fidelity, and is one of the characteristics of the smooth, midrangey tone that we more often associated with octal-preamp-loaded guitar amps of the late ’40s and early ’50s. To keep this tendency from devolving toward total mud, however, Webster-Chicago has a few more tricks up its sleeve.

The 6V6s that receive the signal once it’s split and flipped at this paraphase PI are ostensibly cathode-biased, but this too is performed by a means we haven’t seen used in another conventional guitar amp. In a configuration intended to create some frequency suppression – much as seen with more common forms of negative-feedback loop, but achieved very differently here – each of the 6V6s’ cathodes are connected to the opposing sides of the Stancor output transformer’s secondary connections (i.e. the positive and negative signal terminals that also drive the speaker). The secondary’s common connection is wired to ground via the 200-ohm resistor and 10µF bypass cap we’d usually see connected jointly to pin 8 of each 6V6 in a cathode-biasing configuration. Equally unusual, and to further voice the output stage, a small network comprised of a 100k resistor and .0022µF capacitor wired in series connects one of the OT’s primary’s inputs to the other (note that these have been modified in our featured example).

If you acquire one of these intending to make alterations, you’ll notice a cramped rat’s nest in the chassis. This is point-to-point wiring in its truest sense – and not its best sense. Spend a few minutes tracing and re-wiring half a dozen of these connections and you’ll see why the circuit board was praised as high progress in the late ’40s and early ’50s.

Add it up, and (no surprise) this combo sounds a lot different than our benchmark ’55 Fender Harvard or other amps of its ilk. Beyond that, though, it also puts out far less volume than you’d expect from its tube complement and general configuration, even accounting for its inefficient 10″ Magnavox Alnico speaker. The reason is found in large part in the low DC operating voltages on the plates of each tube. Where you’d find 120 to 160 volts DC on the plates of the first gain stage in most guitar amps of the era, this 6AV6 has only 45. The 12AX7 phase inverter sees 105 volts at each side (we’d expect 200+/–), and the 6V6s only around 280 (a Harvard would see around 310 there, a tweed Deluxe around 350). Lower voltages mean relatively less signal strength from each stage, but they also indicate a “browner” sound, which this amp delivers.

Fired up and introduced to a Telecaster, this amp proves appealingly warm and mellow, with a beautiful sweetness to the notes. The core sound is clear and round – not so brown it’s indistinct and mushy – yet there’s no irritating bite in the treble whatsoever, just a very ear-caressing tone. Turned up, it’s chunky and just a bit raw, with a great natural rock-and-roll overdrive. And if it’s not all that loud, well, that’s the goal so many of us are chasing these days anyway, right? Meaty, toothsome tone at basement-friendly levels? Yes, please – and delivered with ease by this lusciously retro chunk of oxblood-covered tubular goodness.