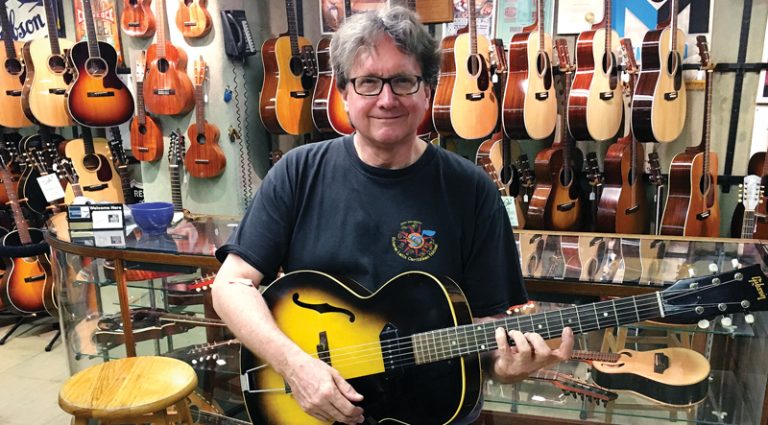 Legendary fish-out-of-water reggae guitarist Andy Bassford has been a first-call sideman for decades. Now, he’s stepping out front with his first solo album – a remake of the soundtrack to the classic film The Harder They Come, which transported him from Hartford, Connecticut, to Kingston, Jamaica – and then, the world.

How did a small-town boy become a sought-after reggae sideman?

I’m not sure! I started on violin and viola. After I saw B.B. King, I had to learn guitar. I started in rock bands, then saw The Harder They Come; seeing Toots sing “Sweet and Dandy” changed my life. I discovered that Hartford’s Jamaican community had its own record shops. So, I studied the music and joined a reggae band. Then, Horace Andy hired me to play on “In The Light” in 1977. It sold well and we went to Jamaica in 1980 to record. That didn’t happen. But I got a couple of sessions, so I stayed.

Word got around fast. My influences were different, but I knew the tradition. Then I joined Lloyd Parks and We The People. We backed 10 or 12 singers each night, played dances, and toured with Dennis Brown. Total immersion!

I left Jamaica in 1985, continued with Dennis, then did 22 years with Toots. Currently, I freelance, and play with Monty Alexander.

With reggae, the guitar is both the lead instrument and one of the main percussive points. How does reggae guitar differ from other styles?

Playing rhythm is counterintuitive. You play up beats with down strokes! On lead, you decorate the bass line and complement the singer. The phrasing is very idiomatic. Sometimes, you’re way back on the beat. It requires much study.

You’ve played with some heavy hitters…

After 40 years as a sideman, what prompted you to re-record The Harder They Come?

In 2013, I did a project called Island Head. It was guitar-heavy reggae/rock versions of Bob Marley songs. To promote it, we visited Cable Man Dan’s radio show on Sirius XM. “Rivers of Babylon” is Dan’s favorite song, so I recorded it for his ID, then released it on iTunes. Reaction was positive, so I decided to do an album.

I’d always wanted to record “Many Rivers To Cross.” Then I thought, if I’m going to re-do two songs from the movie, why not the whole album? Nobody knows me, but everybody knows that record. It made sense.

Jamaicans love familiarity, so the melodies stayed close to the script. I improvised only after completing the lyric. Almost everything, including vocals, was cut live in three-hour union sessions. There were very few fixes. I did re-amp some things.

What were your go-to guitars and amps?

Three tracks are my Epiphone Les Paul with Lollar Imperials. The others are my ’68 SG, ’66 Tele, ’64 Strat, a Squier chambered Tele, and my ’55 ES-125. Mikey Chung used my Hamer Special for rhythm.

“Rivers of Babylon” has a nice 12-string sound. What is that instrument?

An Ibanez AW-25 recorded in my living room.

Halfway through “Many Rivers to Cross,” you transition from a clean-toned melody to a hotter solo sound.

That’s the Les Paul through the AC-15 and Deluxe. I started with both pickups turned up to around 7. The solo is the bridge pickup plus a Soul Clone. You can hear me click it on! We left that in.

At the extended end of the title track, two guitars trade solos. Are they both you?

No. It’s me and George Naha playing live. George listens so well, I thought I had four hands.

On “Johnny Too Bad,” is that a baritone guitar?

Some Americans think that reggae was born and died with Bob Marley, yet it remains one of the most popular idioms worldwide. To what do you attribute its lasting appeal?

Reggae contains spirituality, protest, romance, and rhythm. It’s the voice of the dispossessed. When you travel, you realize how universal it is.