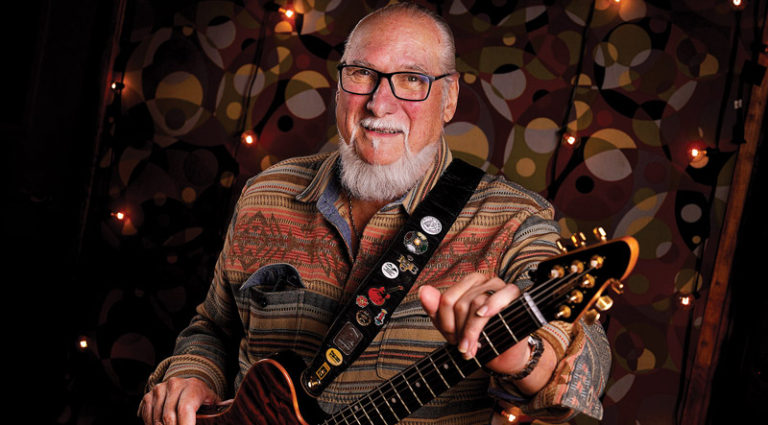 When you think of guitar heroes, Steve Cropper may not be on top of the list. Not one for spangled capes or rhinestoned suits, he’s rarely played a screaming one-note solo. And he doesn’t strike those superhero poses.

Instead, as he’s said many a-time, he’s “just” a rhythm player. And he plays guitar in service to the groove.

Consider his resumé; Booker T & the MGs, Stax Records, helping hand on Wilson Pickett’s “In The Midnight Hour,” Otis Redding’s “(Sittin’ On) The Dock Of The Bay,” and Sam and Dave’s “Soul Man.” Plus there’s accompanying John Lennon on Rock ’N Roll, backing John Belushi and Dan Aykroyd in The Blues Brothers, and producing albums for the likes of Jeff Beck, John Prine, and John Mellencamp. And that’s just getting started.

You may not realize it, but Cropper could be one of the “most-heard” of all guitar heroes.

When Covid came to town, he masked up and crafted a new solo album, Fire It Up, his first “proper” solo shot since 1969. And it calls on all those many influences.

“It’s made from old grooves, because during a lockdown, you work on stuff that’s been in your head for years,” Cropper explained. Chalk up one – perhaps the sole – plus of the pandemic.

The album steps back in time to Stax days. Cropper is backed by drummer Nioshi Jackson, vocalist Roger C. Reale, and Jon Tiven on bass, sax, harmonica, and keys.

So how do you write a soulful R&B classic?
“When I write, I usually start with a title – that way I know what I am writing about. So title first, then the music,” Cropper says.

He tells about a songwriting session with singer Eddie Floyd in 1966; the two were in a room at downtown Memphis’ Lorraine Motel with a thunderstorm providing accompaniment. Trying to write a song about the intersection between love and superstition, they toyed with numerous tropes – from rubbing a rabbit’s foot to breaking a mirror. Nothing stoked the fire. As lightning flashed, Cropper asked Floyd, “What do people do for good luck? Eddie said, ‘Knock, knock.’ I said, ‘There’s our song – ‘Knock On Wood.’” It went to the top of the Billboard Hot R&B chart in ’67.

Asked about the indelible riffs Cropper is famous for – think “Soul Man” and those sliding sixth double-stops – he’s equally humble.

“If I come up with an unusual guitar riff, I’ll usually save it for an instrumental,” he says. The world-famous fills are just icing on the cake.

“I guess they just come naturally,” Cropper shrugs. “They usually put up a track or song and I just start playing. If I don’t like it, I start over and play something else. I almost never try to come up with something if I’m not in the studio to record it.”

Fire It Up is rife with riffs. The title track is classic Memphis R&B, while “She’s So Fine” is sweet soul. And Cropper plays with his usual effortless, tasteful grace throughout.

Long an Esquire and Telecaster man, these days he swears by his custom-made Peavey built by Jim DeCola. As Cropper told VG’s Dan Forte, “When people ask why I don’t play a vintage Tele, I say, ‘It’s kind of like once I drove a Ferrari, I never went back to a Chevrolet.’

“For the basic tracks, we just plugged in direct through an ART SGX2000 preamp,” he said.

Cropper’s never been an effects guy, but on this album he added a Marshall Bluesbreaker 11 pedal for some dirt.

Any other secrets? Cropper’s again typically modest: “I used a long chord and played in the control room.”