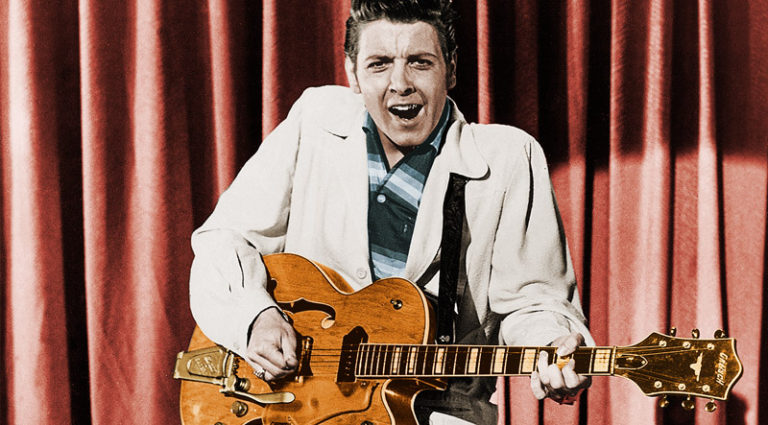 One night in the late 1950s, Eddie Cochran set the world alight onstage in the City of Angels. Though the details are lost to history, The Los Angeles Times reported, “Last night, Eddie Cochran rocked and he rolled and finally the cows came home. By the time he strummed his last notes on that big, beautiful orange Gretsch 6120 guitar, the audience was worn out and went home satisfied that they had seen the best rockabilly anywhere.”

Cochran was known by that “big, beautiful” guitar; most photos of the era have him showing it off as a veritable symbol of his music, and it appeared on many EP and LP covers. The Cadillac of guitars, its bells and whistles glittered in the lights, making women swoon and men envious. And, it had that sound.

Cochran played the 6120 throughout his brief career, and it was at his side when he died in a car crash while touring England with Gene Vincent in 1960. Cochran was just 21 years old.


Despite his matinee-idol looks and penchant for wearing cardigan sweaters, Cochran was ’50s teenage rebellion personified. His biggest song, “Summertime Blues,” was a bold and brash anthem that perfectly captured pent-up teen frustration and desire. With his follow-up, “C’mon Everybody,” he took the message further, issuing a call to arms to get up and dance to rock and roll.

Far beyond many of his contemporary rockabillies, Cochran was a consummate musician and performer. He wrote most of his material and deftly engineered his sound in the studio via experimentation with multi-tracking and overdubbing. He could croon a ballad or scream through a rocker and play a virtuosic, purposeful guitar. And, he was a true rock-and-roller with the moves onstage. Beyond that, he performed in three Hollywood films. Given more time, who knows what future awaited.

While Elvis Presley and most other rockabillies came out of the Deep South, Cochran was born in Albert Lea, Minnesota, where his parents had migrated from Oklahoma. In 1955, his family moved west to Bell Gardens, California, a suburb of Los Angeles.

A quick musical study, he took lessons in school but quit band and the trombone to play drums in his own group. He skipped piano lessons and instead taught himself guitar. His first and favorite sounds as a teen was the country music on the radio. Soon, he dropped out of high school and devoted himself to playing guitar.

Soon, he was performing at an American Legion hall, when he met country songwriter Hank Cochran. Though unrelated, they formed a duo as the Cochran Brothers and performed and recorded country music together for the Ekko label, Eddie playing a Gibson L-4CN with a DeArmond pickup. The duo split amicably after a year, Hank going on to a career in Nashville, Eddie to rock and roll.

Cochran had heard Elvis Presley, and like so many, he suddenly got rhythm. Based on some of Cochran’s first recordings, Hollywood producer Boris Petroff invited Cochran to appear in the 1956 big-budget teen comedy film The Girl Can’t Help It, starring blonde bombshell Jayne Mansfield. In the movie, Cochran sang “Twenty Flight Rock” with true swagger, punctuated by stop-time interludes, and a Memphis-style hiccupping vocal, perhaps in caricature of Presley.

Cochran’s performance caught the eye of producers from L.A.-based Liberty Records and he began recording at Hollywood’s Gold Star Studios, becoming a proficient session musician and producer. In ’57, he was featured in a second film, Untamed Youth, with another platinum-blonde heroine, Mamie Van Doren. He also scored his first hit, “Sittin’ In The Balcony,” which peaked at #18 in March of ’57. This was followed by the singles “Drive-In Show” and the stellar teen-bopping ode “Jeannie, Jeannie, Jeannie.”

In the summer of ’58, Liberty released “Summertime Blues,” which Cochran co-wrote with manager Jerry Capehart. The song became his highest-charting hit during his lifetime, reaching #8 on the Billboard pop charts.

Throughout ’58 and ’59, Cochran played package tours across the U.S. and Canada, often headlining shows with Vincent. In January, 1960, the two arrived in Great Britain for a run of package shows that would prove a screaming success, their music and style leaving an indelible mark. But, then, just before midnight on April 16, 1960, Vincent, Cochran, and Cochran’s fiancée, songwriter Sharon Sheeley, were riding in a taxi after a show when it crashed into a lamppost. Cochran was thrown through the windshield and suffered severe head injuries. Taken to a hospital in Bath, he died the following day. Sheeley and Vincent survived.

Cochran’s image was tied to his guitar. He may have bought the 6120 in homage to one his guitar-player idols, Chet Atkins, but he recognized its potential as a rock-and-roll instrument. Cochran bought his – a first-year/’55 model with serial number 16942 – from Bell Gardens Music Center. At the time, it was closely associated with Atkins, of course, and thus with country music. Atkins had not yet have made Nashville the country-music capitol of America, but he was widely admired by fellow pickers. Legend has it Atkins started on ukulele then traded a pistol and chores on the family’s Tennessee farm to his elder brother, Lowell, for a guitar. Inspired by Django Reinhardt and Les Paul, he soon became one of the most influential players of all time.

Cochran was a fan of Atkins, a.k.a. the Country Gentleman. In fact, one of his own early bands was Eddie Garland and his Country Gentlemen (yes, Eddie was Eddie). And he later played Atkins’ 1954 hit “The Birth Of The Blues” as an audition for a gig.

To create the 6120, Gretsch duded up its basic Streamliner guitar to look “country” as befitting Atkins’ rep – though Atkins would later state he never liked the countrified stylings.

A Wild West “G” was branded into the body’s bass bout. The headstock was inlaid with the steer-head graphic, while the fretmarker motifs were pure cowboy-and-cactus kitsch. Gold-plated hardware including a gold, fixed-arm Bigsby vibrato tailpiece highlighted the orange stain. A pickguard with a gold-painted bottom and Mr. Guitar’s signature finished the look.

The original ’55 6120 sang through two DeArmond Dynasonic single-coils (in his autobiography Chet Atkins: Me and My Guitars, he admitted to never liking the Dynasonics: “They were too heavy on bass response, and they hummed terribly.”) Cochran at first retained the Dynasonics; several early photos of him show the guitar with both in place. But he soon replaced the neck pickup with a Gibson P-90 that gave the guitar more bite.

He also individualized the pickguard, at first placing a piece of tape over Atkins’ signature, then later sanding off the paint and autograph. Contrary to lore, he did not replace the stock pickguard with a clear version.

“Just trying to be an individual, I think,” says rockabilly guitarist Darrel Higham, a Cochran devotee. “No disrespect to Chet.”

But the message was clear: Cochran didn’t need to ride on Atkins’ coattails. He was promoting only himself.

Finally, Cochran added a leather-tooled strap made by Connie “Guybo” Smith, the mother of his bass player.

Cochran’s guitar came from what was likely the second batch of 6120s made by Gretsch, according to marque historian Edward Ball, author of >Gretsch 6120: The History of a Legendary Guitar.

“Early batches at Gretsch were typically comprised of a 100 units, but in the case of the 6120, they shared a portion of serial numbers with 6121 solidbodies,” said Ball. “Point being that of the 100 units within the batch that originates the Cochran guitar, plausibly 25 percent were 6121 models. Also, for whatever reason, the first 10 serial numbers in the 16900-16999 batch were taken by Country Club models from the previous batch, and some had a rare two-tone gray finish.

“How many 6120s were made in the same batch as Eddie Cochran’s legendary example? The answer would be on the order of 65 or so – making them more limited than some people assume.”

Ball also notes that the earliest examples in that batch had seven fretboard inlays and 21 frets to the neck, as on the debut batch of the model (16450-16550). Cochran’s guitar was the updated version, with eight inlays and a 22-fret neck.

Today, Cochran’s 6120 remains with his family and is on loan to the Rock and Roll Hall of Fame and Museum, in Cleveland. But its influence travels far and wide.

Given the pedigree of the brand and the influence of rockabilly, it’s little wonder that rockers plugged in Gretsch hollowbodies, from George Harrison to Brian Jones to Mike Nesmith of the Monkees and beyond. And others followed, including Poison Ivy of the Cramps, Jim Heath of the Reverend Horton Heat, David Lee of the Legendary Shack Shakers, Higham, who plays with his wife Imelda May, and more.

Still, for all its history, the 6120 may never have achieved its current level of fame, desirability, and value if it were not for rockabilly revivalist Brian Setzer. The Stray Cat proved the 6120’s musical essence and class for a modern age that had largely forgotten about the guitar.

“What really started me on the Gretsch was walking into a local record store,” said Setzer. “The owner hung the album covers on fishing line so it looked like they were just floating in midair and spinning around. When I saw that picture of Eddie Cochran on the cover of that ’72 Legendary Masters LP and he’s got that Gretsch and his hair slicked back… I said, ‘Oh my god, that’s the guy.’

“I didn’t know who he was and I’d never heard his music. But I wanted to be him. I wanted to look like him. I bought the record and went home and it absolutely changed my life. It was the whole package. I just wanted to be that. It turned my life around.”

This article originally appeared in VG’s February 2017 issue. All copyrights are by the author and Vintage Guitar magazine. Unauthorized replication or use is strictly prohibited.