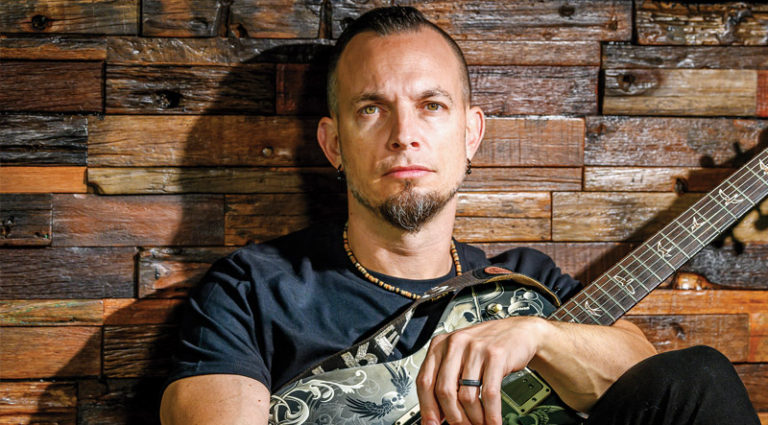 The odds of any guitarist being in a highly successful rock band are long. Chances of being in two are slim. Three? Virtually unheard of. But guitarist Mark Tremonti is one of the lucky few – first climbing the charts with Creed before forming Alter Bridge, then fronting his own band, Tremonti. In September, the latter released its fifth studio album, Marching In Time. One of rock’s busiest gentlemen spoke with VG about his new music, gear, and future.

How did being the band’s singer and songwriter affect the creation of guitar parts on Marching in Time?
From a guitar standpoint, it’s always a race to the finish. Once you finalize a previous album, you have to dive back into your guitar obsession to gain as much knowledge and skill as you tackle another record, so you don’t just keep spitting out the same tricks. Once you have the arrangements and you’ve tracked rhythm guitars, you’ve got a two- or three-week window to finalize leads. For me, that’s always the biggest race to finish. The previous record (A Dying Machine) was a concept album – a long, fictional story that required a commitment, more diving in. This one, each song stands on its own. It’s easier to digest right off the bat.

There are a lot of pleasantly surprising twists and turns in “A World Away.”
That song started with me thinking the beginning would be great with a big, chunky, muted, dynamic guitar part that would grab attention. Normally, I’ll find a drum loop or tap something myself, then play along to get a feel and tempo. Then, I’ll try to tackle a chorus, a verse, a bridge, a pre-chorus, and probably write four times as many parts as necessary. After that, I’ll chop the ones that aren’t as interesting, make it as dynamic as possible, and connect the parts.

Which amps did you use?
It’s about 80 percent my signature PRS MT 100, which is going to be released in early 2022; hopefully, we’ll have it at NAMM. I released the MT 15 a couple of years ago, and the MT 100 is the big brother 100-watt version with a third channel. I coupled it on the dirty side with a Cornford RK100 – one of my favorite amps of all-time – and a Victory V40 on the clean side, along with the MT 15.

How about the guitars?
Primarily, I used my signature PRS. When I didn’t use that, it was one of my producer’s PRS SE Baritones. There was also one of PRS’ first baritones, which I’m lucky to own. It has made a ton of records by Chevelle, Limp Bizkit, Incubus. We were on a tour, and Limp Bizkit was on a show, and Wes [Borland] came over and was like, “Is that the guitar I think it is?” It’s one of the best-tracking baritones you could imagine.

What initially attracted you to PRS guitars?
As a kid, it was my dream to have a job at a guitar shop. I applied and always got turned down. Once I got a song on the local radio station, I finally got that job, but I only had it for a month or two before we got our record deal. But, at the shop we had a few PRSs way up on the top rack, which I couldn’t afford. Then, when we were in Boston, all of our gear was stolen. We filed an insurance claim and I finally had the cash to afford a PRS. Turned out I couldn’t play it on stage, though, because the switches were all in spots I wasn’t used to (laughs).

In the early 2000s, I was approached by PRS and they said, “Why don’t we design your guitar?” And at that point, it was just me and Carlos Santana who had signature models.

What is the status of Alter Bridge and Creed?

I’m writing right now for the next Alter Bridge record – me and Myles [Kennedy] plan on getting together in January to put our heads together with new music. With Creed, there’s always phone calls, “These promoters want you to do shows.” Nothing’s concrete – it’s just talk at the moment.