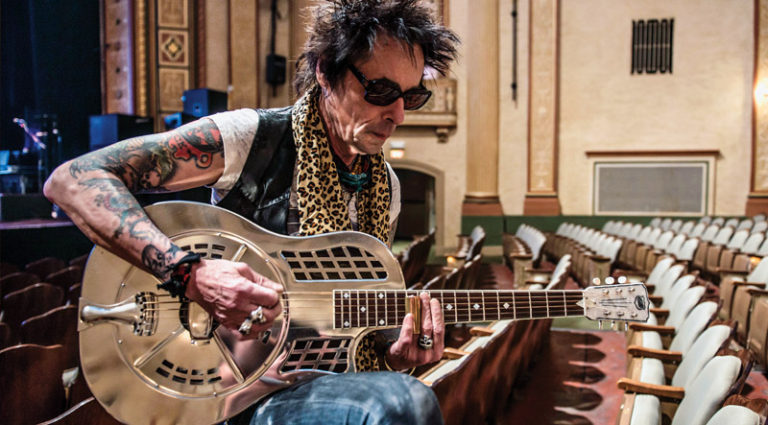 Brooklyn-born guitarist Earl Slick is best-known for his work with David Bowie, which spanned several decades. His recent participation with other Bowie alumni in a special concert resulted in a performance of “Life on Mars” used by NASA during the landing of the Perseverance rover on February 18.

“That was taken from the live stream that the Bowie band and guests did at ‘A Bowie Celebration’ on January 8,” Slick recounted. “At the time it was recorded, I had no idea who the vocalist was going to be, but I was pleasantly surprised by the stellar performance by [English singer] Yungblud.”

Slick’s newest release. Fist Full of Devils, is an instrumental album anchored in the blues and with a down-to-earth approach. But most of the music goes beyond I/IV/V songs.

“This not a blues record, per se, but the roots are quite obvious to me,” he said. “At the time I started playing out, New York had a lot of blues-influenced bands which is where I got my start.”

“The idea was to re-address a few instrumental songs as well as some unfinished bits and pieces that were started quite some time ago,” Slick recalled. “This prompted me to continue writing to accumulate enough material for an entire album. The original material was written with the idea of breaking into scoring film, TV, etc., hence an instrumental record.

“After all was said and done, I found myself touring quite a bit, and I honestly forgot about it until Schnitzel Records contacted me to see if I had any unreleased material we could put out. I had a good listen to see if I still liked it well enough.”

The use of effects such as light reverb on the guitar and drums on some songs proffers an appropriate retro-vibe.

“The reverb and delay effects did impact the way I played,” said Slick. “I would use these to push my approach in various directions. As for the end result, my co-producer and engineer, Mario J. McNulty, had a lot to do with that.”

What sounds like a UniVibe on some tunes, Slick advised, “…is simply double-tracked guitars that are slightly out of tune with each other.”

“I had a few go-to guitars on the record,” he said. “The majority of the tracks were my Nash Tele and my Framus Earl Slick signature model.”

Even some of the rhythm guitar has intriguing tones, such as the brittle-yet-resonant chords in “Far Away.” According to Slick, it’s his signature instrument (neck pickup) through his early-’70s Ampeg VT40.

The rollicking piano is the work of Al Marz.

“I gave him very little direction,” Slick explained. “I just let him loose to do what he does best.”

Acoustic guitars begin making their presence known about halfway through.

More sonic surprises are found in those primarily acoustic tunes; Slick averred that what might sound like a vintage Mellotron on “Lost” is actually “…electric guitars using an E-Bow with some delay.” And what might sound like mandolin on the title track is a 12-string with a capo at the seventh fret.

Slick is upbeat about the overall presentation on Fist Full of Devils.

“Now that I’ve listened with fresh ears, I can hear bits from a lot of my early influences,” he said. “This was not very clear at the time it was recorded. It goes to show how all of the stuff you listen to over time never leaves your head!

“I’m pleased to finally get this material out. Sometimes, taking extended periods away from the work helps you hear it in a new light. Sometimes you hate it, but in this case it was just the opposite.

“I am also really looking forward to getting back to playing live again,” he enthused. “Now that things appear to be opening up again, that’s looking really good.”

Tommy Shaw and James “J.Y.” Young on The Mission