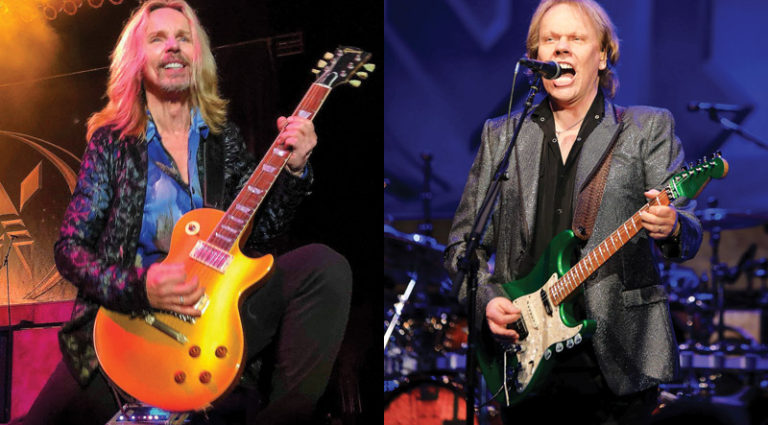 “One thing I like about how Styx does progressive stuff is we try and make it friendly progressive, not math,” said Styx vocalist/guitarist Tommy Shaw, referring to the band’s 17th studio album, Crash of the Crown.

Fans of Styx’s mid-’70s work will love the adventurousness of the new album, but those who adore the band’s endless supply of catchy, concise hits should find plenty to embrace, as well. Crash of the Crown appeals equally.

“It’s a narrower group of people, I think, that like progressive rock as opposed to what Styx has always done, but Styx has always been semi-progressive. The band is really good and can do these types of things very easily and they don’t sound angular or throw you off,” said Shaw, who credits Sucherman’s skill with playing odd time signatures. “Styx is more of a compositional band. There’s not a lot of improvisational stuff going on. The songs have arrangements.”

Young, Styx’s sole full-time remaining original member (Panozzo records and performs with the band on a limited basis) agrees the album’s sound is traceable to their initial efforts.

“Stylistically, the record shifted around a bit, but you can see the influences from the early days are all still there. They’re just put together a little differently,” said Young. “It resonates with vintage Styx but it definitely strays, in some cases, dramatically from there. I think of Lawrence singing ‘Common Ground’; that song, to me, really echoes what’s going on in the world today. We’re on this little ball of terra firma going through space, out here by ourselves. And, as crazy as we see things being on television, we need common ground. I think Lawrence’s voice there is very powerful.”

Much of the recording was done at Shaw’s home studio in Nashville.

“I flew to Nashville twice in one month, maybe three days at a crack,” Young said. “They had laid out stuff for me: ‘JY, do you your thing here,’ ‘JY do your thing there,’ playing solos. Tommy is a great lyrical lead-guitar player. I’m more influenced by Hendrix.

“There are certain things, like ‘A Monster,’ where I requested to be turned loose. There were enough openings; if you’re doing a whammy swoop and there’s a million other things going on, unless you really push it in the mix, you don’t even notice it. So it left a more-open landscape for me to paint on. There were times I did double harmonies to add layers.”

Styx still looks at an album the old-fashioned way.

“We like to think of things in terms of two sides of an album – like vinyl. We want it to fit on there,” Shaw said. “I don’t ever want it to lose my attention, and we don’t want anybody else to lose their attention. The worst thing that can happen is if somebody turns your record off before they listen to the whole thing.”

A variety of Shaw and Young’s favorite guitars were used on Crash. For electrics, Shaw played two reissue Les Pauls, two Juniors (for slide solos), a Fender Electric XII, and a few Stratocasters including Young’s ’65. For acoustics, he played a ’43 Gibson J-45 Banner, an older Collings, and a J-200. Young played his ’65 Strat and a few custom builds.

Shaw and Young are happy with Crash and how it is uncompromisingly Styx.

“The thing is, no matter what we do, we generally sound like Styx. You hear it and think, ‘That’s gotta be Styx,’” said Shaw. “You never want to do something that’s so far out on the edge that people don’t know who it is. When JY does a guitar solo, you know that’s James Young. When you hear our vocals, that’s Styx. You are who you are. You can go out on a limb, but it’s you going out on a limb.”

“We’ve got incredible musicians in Styx,” Young added. “Some people believe Todd is the best drummer on the planet. Lawrence is phenomenal. Ricky is a killer bass player. Chuck is terrific. Tommy is amazing. We’ve not suffered in the ‘musical excellence’ department; the songwriting chops are there, the vocal and performing chops are there. One would hope we’d come up with something pretty good!”