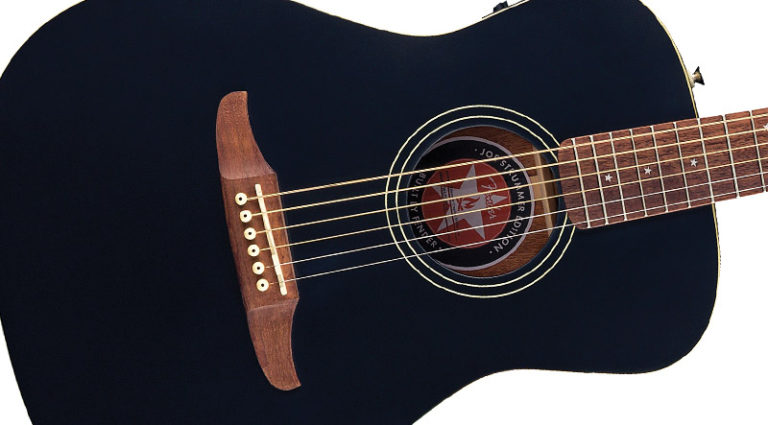 Punk legend Joe Strummer might not be the first name that comes to mind when the subject turns to “acoustic guitars.” But in fact, all-night hootenannies hosted by the former Clash frontman at the Glastonbury Festival became the stuff of myth. Thus, the inspiration for this small-body acoustic/electric.

The Campfire’s outward appearances certainly befit punk’s loud-fast ethos. The matte finish would be every bit at home on a stripped-down hot rod. That’s not to say it’s flourish-free; tasteful nickel hardware, aged-white binding. and a double-ring rosette complement the flat black, while star inlays on the walnut fretboard suggest The Clash’s Combat Rock-era iconography (as does the camo Fender logo on the padded gig bag).

The satiny finish carries to the mahogany neck, a slim-C shape that, in further combo with 1.69″ nut, makes for easy fingerpicking and strumming. Expect that punch associated with a small body, but note separation and sustain, too. How much the sustain is due, as Fender suggests, to the tilt-back headstock is anyone’s guess, but a resonant spruce top will surely help notes cut through that matte finish until it opens up.

Perhaps curious given the Campfire’s song-pull inspiration is the inclusion of a Fishman pickup. Given the instrument’s quality at this price point, consider it gravy – and just the tool if you need to cut through the din of garageland.