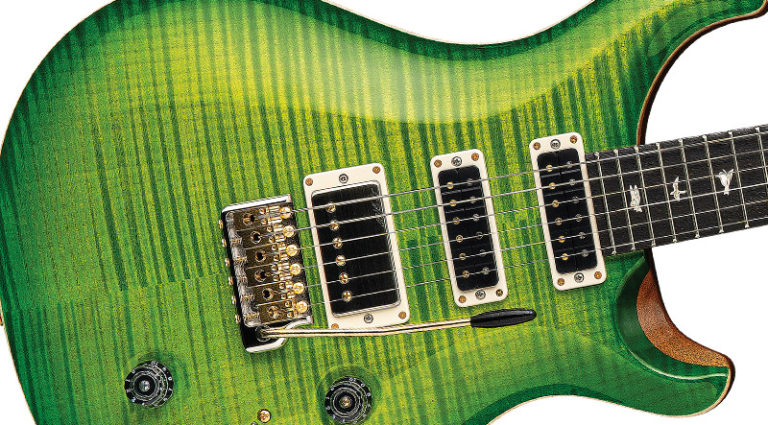 The new Studio model is the culmination of many decades of work from the design minds at PRS, as they attempt to craft a solidbody that can do it all.

The idea with this model is to give the versatile HSS pickup format a fresh spin with PRS’ Narrowfield pickups instead of single-coils. Otherwise, the Studio has many of the features we’ve come to expect in a top-of-the-line PRS; the 25″-scale neck has a 22-fret rosewood fretboard, while its fast Pattern neck harkens to a certain vintage feel favored by many players. There’s a mahogany body with a thick, carved maple top that sports their unfinished “natural binding.” For finishes, look for a variety of stunning tops, from the heaviest flamed 10-Top maple to a swank goldtop. The new nitro-over-cellulose CAB finish can be applied thinly for desired resonance while delivering a high-gloss look.

For mechanicals, the Studio has hybrid hardware for the tuning buttons (on open-gear Phase III locking tuners) and a PRS Patented Tremolo Gen III vibrato bridge. A clean control layout of master Volume and Tone with a five-way selector switch keeps things simple and uncluttered. You also have to love where PRS locates the Volume knob – perfect for swells on the go.

Now, the stars of the show – pickups and electronics. The Studio reimagines the HSS setup, with the humbucker in the bridge slot and two Narrowfield ’buckers in the middle and neck positions. The intention is to give players a broader range of tone possibilities, with the snappy Narrowfields bringing to mind various P-90, mini-humbucker, and even single-coil flavors. The kicker is that the coils of the 58/15 LT (low turn) bridge pickup split when you pull the Tone knob up, giving access to the split-bridge pickup alone, or a split-bridge/middle Narrowfield combination for quackier tones. In all, there are seven combinations.

In hand, the Studio delivers what it promises. It’s a do-it-all solidbody that can cover all the Gibson-to-Fender electric tones once required of a studio guitarist. The vibrato adds to that completeness. It’s a pricey plank, but also a top-end solidbody that earns its keep and gives guitarists just about everything in one instrument. If you can only take one guitar to a gig, rehearsal, or recording session, but need to cover all the sonic bases, the PRS Studio has you covered.