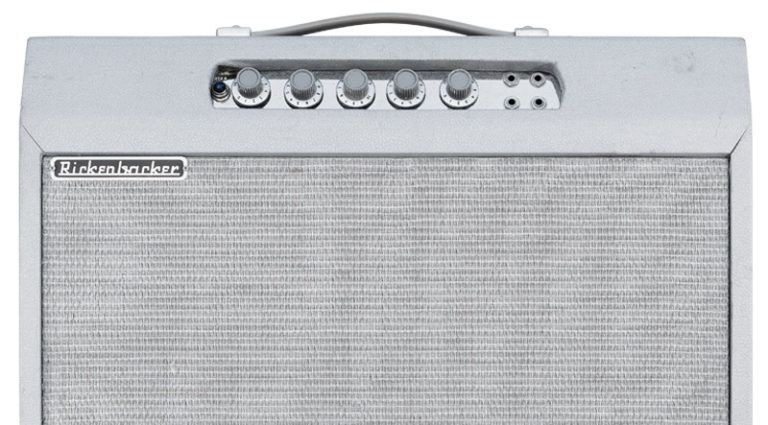 For most guitarists today, glimpsing a vintage Rickenbacker combo elicits a response like, “Wait… Rickenbacker made amps?” But remember, the brand evolved out of the first company founded entirely on the premise of the amplified six-string.

Here’s one for any Rickenbacker fans who’ve wondered what stroke of stylish originality led the company to cover its ’60s guitar cases in silver-gray Tolex – maybe because it matched the stuff they were putting on their amps! The truth is, of course, this look adorned far more cases than it did amps, which Rickenbacker sold in far lower numbers. But when you cover an amp in a radiant silver, it makes a dramatic impression under stage lights.

The roots of Rickenbacker are wholly entwined in the quest to make the guitar louder, and though we’re looking at an amplifier that was part of a product line intended to do exactly that, the effort began before electrification was part of the plan. The brand arrived at its prime position in the guitar boom of the early ’60s following three name changes and the stewardship of several other major figures in the history and development of the electric guitar, and if none were particularly known for development of the amplifier (the way Leo Fender, Jim Marshall, and Dick Denney were), amps were a necessary part of the plan.

The company’s foundation extends to National Resophonic’s introduction of the resonator guitar in 1927. This acoustic solution to the instrument’s meager volume capabilities – a collaboration between instrument maker John Dopyera, metal fabricator Adolph Rickenbacker, and guitarist/inventor George Beauchamp – may have been short-lived, but as the electromagnetic pickup and tube amplification emerged as the obvious way forward, each would play a big part. Dopy-era eventually became involved in Valco, which was co-founded by his brother, Louis.

Rickenbacker established one of the first lasting manufacturers of electric guitars and amplifiers, with significant input from professional guitarist George Beauchamp and engineer Paul Barth, who together developed one of the first viable electromagnetic pickups – the “horseshoe” pickup of 1931. For the next three decades, however, Rickenbacker (sometimes spelled “Rickenbacher” per his surname before emigrating from Basel, Switzerland, to the U.S. in 1891) would be the outfit’s flagship brand rather than the company name. Having first called their company Ro-Pat-In, by 1932, Beauchamp and Rickenbacker changed it to the more-appropriate Electro String Company, when they released the first commercially available electric guitar/amplifier set… or at least the first not bound for redundancy like those made by Stromberg-Voisinet and Vivi-Tone.

For the next two decades, Rickenbacker (or Electro String, to be precise) was a very different company than that which the British Invasion and the guitar boom of the ’60s would make famous, and its positioning to capitalize on that market would come at the hands of yet another visionary owner.

Francis C. Hall was born in Iowa in 1909 – the same year Leo Fender was born in California – and headed that way in 1919, when his family moved west. Their paths crossed substantially in 1946, when Hall’s Radio-Tel took over distribution of the products of the company Fender had founded that year. When the relationship soured seven years later, Leo and former Radio-Tel sales manager Don Randall set up Fender Sales to handle their own distribution, and Hall purchased Electro String from Adolph Rickenbacker (and other parties) to fill the void.

At this point, however well the company’s seminal roots had primed it for endurance in the field, it was Hall who modernized Rickenbacker’s product lines through the ’50s (with help from Paul Barth, who remained on as factory manager). By the time he laid an early 360/12 in George Harrison’s hands in a New York City hotel room in February of ’64, Hall had made Rickenbacker a household name – in guitar households, at least – though Electro String and Radio-Tel would remain the corporate identities behind that brand for another year.

In the previous year or perhaps in late ’62, Hall unveiled a new lineup of Rickenbacker amps that included the B14A. A giant leap forward compared to the M series that preceded them. According to author Andy Babiuk in Beatles Gear, while making arrangements to gift the new 360/12 to Harrison, Hall approached Beatles manager Brian Epstein with a proposal for the Fab Four to use the new Rick amps for their upcoming American tours and television dates, but Epstein honored his verbal agreement with Tom Jennings for exclusive use of Vox amps. Had they changed sides, this B14A likely would have sold in significantly higher numbers and this 1964 example would be a collector’s item (the larger B22 was also pitched, along with a B15 or B16 for McCartney’s bass).

Dig deeper into the B14A and you’ll discover this highly modernistic creation appears primed to establish reflective radio relay for the budding space program is actually just a fancy cabinet housing what would have been a traditionally horizontal, top-rear-mounted, tweed-era chassis. Within the cramped steel box is a blend of Fender, Gibson, and Valco archetypes with the encouragingly rugged eyelet circuit board nodding toward the former and the plethora of smaller ceramic disc coupling capacitors toward the latter.

Otherwise, it’s put together ruggedly though nothing is especially original. The engine room generates roughly 12 watts from a pair of cathode-biased 6V6GTs, with a 5Y3 rectifier and three 12AX7s in the front end. Given that tube complement and a control panel that delivers two channels with a shared Tone control plus Speed and Depth for the tremolo (spelled “Tremlo” on the panel) the design is perhaps most similar to Fender’s earlier iterations of the tweed Tremolux, though with a few notable variations in the circuit.

Plugged in, the B14A doesn’t have that oomphy tweed-era grind of its earlier Fender counterparts, but exudes an appealingly toothsome clean sound, with a hypnotic tremolo dialed in as desired. The original Jensen P12Q Alnico speaker plays a notable part in the sonic equation here, too, though owners of pristine examples might consider swapping in another speaker if they intend to push the amp hard.

As respectable as the B14A sounds, though, it’s likely still its silver-surfer dress code that will get the most attention, deservedly; it’s likely the only all-silver amp of the era, and to get it there, Radio-Tel had to spray-paint the front of the grillecloth, which is otherwise a piece of synthetic wheat-colored fabric as used on Fender amps of a few years earlier. And thanks to Brian Epstein, it’s all yours for a fraction of the price of a ’64 AC30.