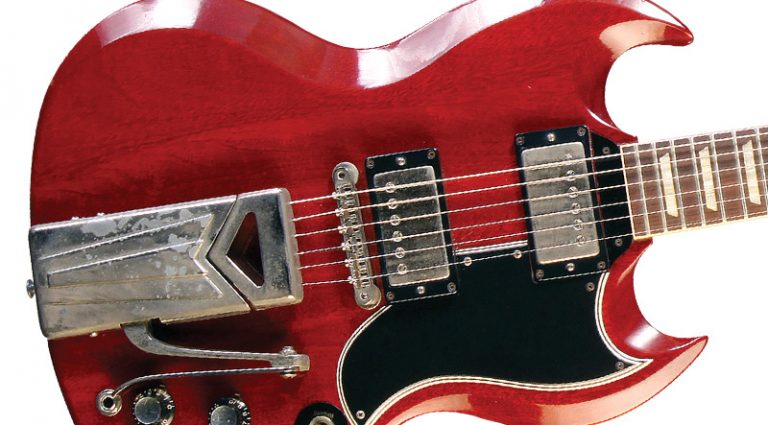 It may be difficult to imagine now, but Gibson’s original Les Paul was only a modest success.

Introduced in 1952, the Gibson Les Paul Model (a.k.a. goldtop) reached peak production in ’53, when 2,245 were shipped before sales failed to meet expectations and subsequent production totals were adjusted downward. Gibson introduced the “black beauty” Les Paul Custom in late 1953, but the reception was similar and its sales peaked in ’55. The plainer/cheaper Les Paul Special did no better. In fact, the lone exception was the basic, stripped-down, one-pickup Junior, introduced in ’54 to relatively good sales likely because its price was much lower. 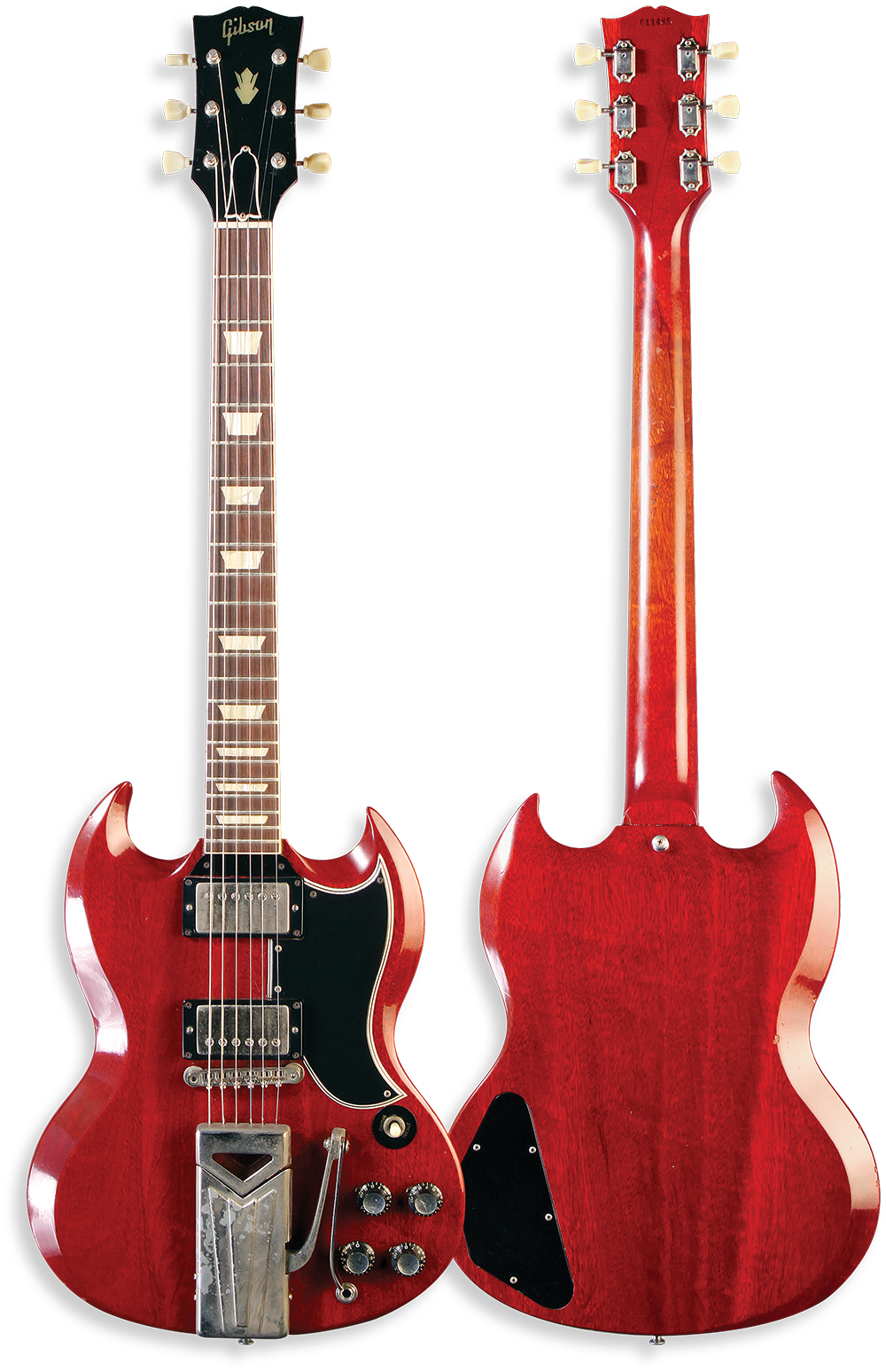 Gibson’s next move to breathe life into the Les Paul line came in ’57, when the Custom and the goldtop Les Paul Model were among the first guitars to get Seth Lover’s newly designed “humbucking” pickup, which offered low-noise output and the inherent quality of cancelling 60-cycle hum that plagued performers in many live settings. The pickup produced a strong midrange tone that, unfortunately, didn’t find a ready use at the time – blues-based rock was a decade in the future and among electric-blues players in south Chicago whose style and sound could’ve put them to good use, few could afford a Les Paul. In the broader market of the late ’50s, the rapidly growing surf music was based on bright, twangy single-coil pickups; Les Pauls were neither bright nor twangy.

In August of ’58, Gibson ditched the Les Paul Model’s gold top in favor of a “sunburst” finish intended to imply “upscale.” An internal memo from that December makes a telling statement: “In the future, all Les Paul guitars will be shipped in cherry sunburst finish – there will be no increase in price.” This was not followed by aggressive promotion, and sunburst was not mentioned in the company’s ’58 or ’59 catalogs.

By the late ’50s, the market for solidbody electrics had become crowded. Fender expanded beyond its Telecaster, Esquire, and Stratocaster with the Duo-Sonic in ’56 and the Jazzmaster in ’58. Gretsch premiered its Jet series in ’54, and while not true solidbodies, they were aimed at the same players.

Aside from subjective preferences about how one guitar played or sounded compared to another, working guitarists talked about how Fenders and Gretsches were so much lighter than a Les Paul. While the difference was not extreme, it mattered to club musicians, who typically stood for hours on end. The folks in Kalamazoo, tired of sales reports reminding them how other makers were besting Gibson sales in guitar shops across the U.S.A., decided to make more-blatant changes to the Les Paul.

In mid 1958, their response arrived in the form of a new double-cutaway body of the same thickness as the previous single-cut Les Paul Junior and Special, but with rounded horns. The design, though, proved problematic on the Special, since the neck tenon was cut during the routing for the rhythm pickup, thereby weakening the neck joint. To strengthen it, Gibson moved the neck-position pickup slightly toward the bridge in ’59. But it was still far from ideal. The Special was renamed SG Special that year, retaining its “slab” body.

A second double-cut design, with pointed horns, was introduced gradually over the course of a year beginning in late 1960, and first used on the Les Paul Standard. Lighter and thinner, it was comparable in weight to any Fender or solid Gretsch, and boasted improved play up the neck thanks to a thinner profile and the fact it joined the body at the 21st fret. Like Fender’s Strat, its body edges were “relieved,” to allow greater comfort. The model name SG was used on the Special starting in ’59, but wasn’t used on the Junior, Standard, or Custom until early ’63.

Unfortunately, the modernization proved flawed. That thin, sleek neck joint on the thin beveled-edge body revealed itself as weaker than on the previous design. The long, thin neck was also less stable, which made it difficult to keep the guitar in-tune. And finally, the rout for the control pots made the body weak in that area, so if the guitar fell off of a player’s strap and hit the floor, the lower bout could break. Even more dramatic was the sad discovery by some players who broke the bout by stepping on their own cord, yanking it an unfortunate angle.

As it had done with the single-cut, Gibson took steps to improve the new guitar. Still, the transition did not equate to resounding commercial success. Production rose slightly in 1960 and ’61, then flat-lined. Plus, the burgeoning folk-music boom had shifted interest to acoustic instruments; sales of Gibson flat-tops almost tripled as mandolin and banjo sales rose, as well.

Interest in Gibson solidbodies wasn’t rekindled until well into the 1960s. Eric Clapton’s use of a ’59 Standard on the John Mayall’s Bluesbreakers’ “Beano” album in ’66 reinforced public interest in the original, but Clapton did not use his sunburst Les Paul very long and became better-known for playing his psychedelically painted “Fool” SG/Les Paul Standard. Blues guitarist Michael Bloomfield acquired a ’54 goldtop in 1965 and used it extensively until ’67, when he acquired a sunburst ’59 Les Paul Standard and used it with the Paul Butterfield Blues Band, influencing many musicians to seek out that specific model. By late in the decade, the popularity of surf music was on the wane and more players were discovering that the original Les Paul, especially with humbucking pickups, perfectly suited R&B and electric blues. Gibson responded in ’68 by reintroducing the single-cut Les Paul Standard in a goldtop version rather than the Cherry Sunburst players preferred (see “Southern Gold: Two Legendary Les Paul Deluxes” in this issue), though, in a move befitting Gibson and the model itself, it was hamstrung because instead of the humbuckers that helped reignite interest, Gibson equipped the goldtop Standard with two single-coil P-90 pickups; it did give the Custom version two humbuckers, but dressed that model with low “fretless wonder” frets, which were unpopular with R&B and blues players. But that’s another story.