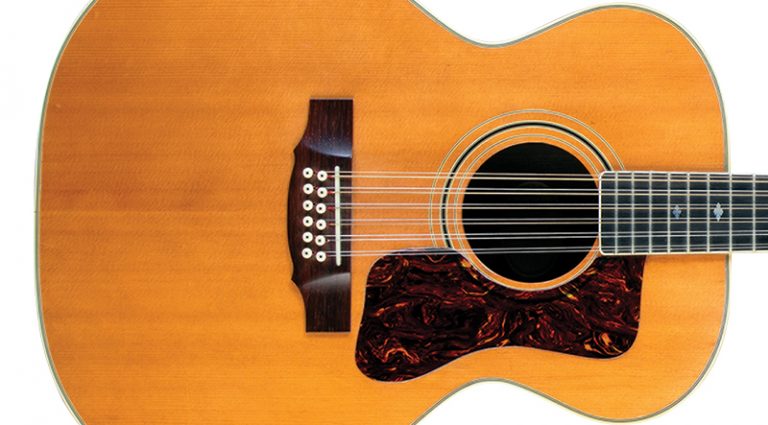 The earliest origins of the 12-string guitar in America remain murky, but it’s likely the idea originated with immigrants from Italy and Mexico; both countries have a long history of instruments with double-string courses – the mandolin, tiple, and many versions of the Mexican guitar being great examples.

By the turn of the 20th century, Oscar Schmidt and Lyon & Healy were building 12-string guitars, the earliest marketed as “Mexican Style” – 12-strings with a longer scale (26″) and tuned three half-steps lower than standard pitch.

Neither Gibson nor Martin produced a 12-string guitar until the 1960s, probably because there was a small potential market for the instrument. Blues musicians like Leadbelly and Blind Willie McTell used 12-string flat-tops in the ’20s, but by the mid ’30s, the 12-string form had fallen into relative obscurity and would remain so until the folk-music boom of the late ’50s/early ’60s. Pete Seeger used a long scale/low-tuned 12-string jumbo flat-top and in ’63, when the Rooftop Singers recorded “Walk Right In” using two ’61 Gibson B-45-12s, the form rose in popularity and public demand increased considerably. That interest prompted Martin and Guild to start making 12-strings.

Also in ’66, Carlo Greco, the foreman in Guild’s woodshop, started building prototype jumbo flat-top 12-strings. By the end of ’67, they were being sold as the F-412 Special, a small batch of which were given Brazilian-rosewood back and sides – some solid, others arched and laminated like the F-512. There were also examples of the F-412 with maple back and sides. At this time, the rosewood-bodied jumbo 12s were renamed F-512s. Until 1974, the F-412 and F-512 were available only by special order, and Guild did not keep records of special orders.

While F-412s manufactured between ’68 and ’74 were relatively consistent in specifications, F-512s of the period were not. Only 23 were made from ’68 to ’69 and they typically had back and sides made with solid Brazilian rosewood along with DeLuxe fingerboard inlays. Those made after ’72 typically had Indian rosewood back and sides and block-pearl inlays with abalone center wedges. Those made after ’69 and before ’72 were consistently inconsistent. The period was particularly experimental for Guild, since the company had just moved from Hoboken, New Jersey to Westerly, Rhode Island; with the larger factory came the freedom for new designs and experimentation.

The F-512 you see here is no ordinary example. Made in late 1970, it does not conform to the specs of the catalog version. While most F-512s had three piece necks made of mahogany or padouk with maple center strips, this guitar has a one-piece mahogany neck with a stacked heel. Additionally, it has a mahogany veneer on the back of the peghead – a feature primarily seen on high-end Guild classical Mark series guitars from the era. The fingerboard has fancy “DeLuxe” German pearl fingerboard inlays rather than the block pearl with abalone center wedges seen on later F-512 models. Lastly, this guitar has Brazilian rosewood back and sides, with the back being arched, laminated, and without interior bracing.

Regarding the stacked neck heel, Carlo Greco built a number of necks for Guild classical Mark VI and Mark VII guitars using this same construction and design, and may also have experimented with the concept on a few flat-tops. According to Guild expert Hans Moust, author of The Guild Guitar Book: The Company and the Instruments, 1952-1977, the stacked heel was “an effort to make more efficient use of the wood necessary to make a neck.”

Moust notes that stacked heels were used on other F-512 (and F-50) models of the same period, but the practice of building the heel from various blocks was not continued.

American production of acoustic guitars was impacted significantly in 1969, when Brazil placed an embargo on logs of Brazilian rosewood. Because Guild, Martin, and Gibson were accustomed to buying logs from Brazil and having them quartersawn in the U.S., the embargo forced the companies to purchase logs elsewhere, initiating the switch from Brazilian to Indian rosewood. This F-512 is likely one of the last guitars Guild made with Brazilian rosewood back and sides, and by that time, it was laminating the wood rather than using it in its solid form.

While modern musicians more often equate the 12-string with manufacturers like Taylor and Martin, the F-512 remains one of the most iconic. When it became available in 1974, it played an important role in sustaining the popularity of the instrument among folk musicians, rock musicians, and singer/songwriters into the late ’70s. Artists as diverse as Pete Townsend, Brian May, Tim Buckley, John Denver, and Dan Fogelberg have all used them in live performance and in the recording studio. The current revival of the 12-string makes this F-512 even more historically significant, as it shows evolution in the model and its unique features are appealing to players and collectors alike.