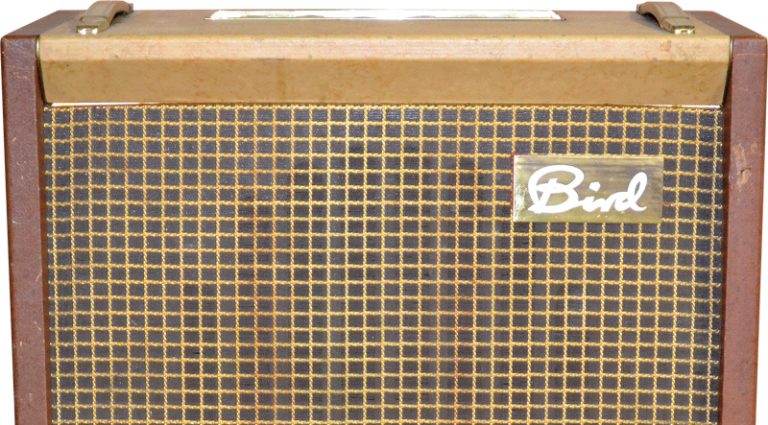 Many of the oddballs, also-rans, and otherwise unusual creations we see in the amp world fall into the “B-list” category – the budget, student, and catalog amps that often display appealing ’50s and ’60s cosmetics but were never expected to lead the field. British maker Bird felt otherwise in creating the Golden Eagle 4/25.

Add up its features and the outrageous ambition of its design, and this amp clearly carried the full weight of its maker’s hopes and dreams as it headed out to conquer the world of Vox, Selmer, Watkins, and those pricey overseas imports from Fender and Gibson.

Did it succeed? Errr, no. But you know that already. If it had, Bird would be a household name… in guitarists’ households at least. Regardless, the Golden Eagle 4/25 was kitted like few other amps in the early ’60s – bigger Magnatones and Gibson’s GA-79RVT come to mind as competition in the “let’s see what we can pack in here” stakes, and it’s also likely Bird was taking a swipe at Watkins’ echo-equipped Joker featured here last month. The model name denotes number of inputs (four) and output rating (25 watts), respectively, and the amp packed two independent channels, reverb, tremolo, and a mystical effect dubbed “Repetitive Echo.” That alone should have won fans.

But, Bird wasn’t fated to crack the big-time. For the company’s lineup, as with so many interesting also-rans, that likely had to do with a lack of understanding of what made a tube-driven guitar amp sing – elements achieved in abundance in Fender’s tweed Deluxe or Bassman, Vox’s AC15 and AC30, and the yet-to-come Marshall JTM45 and JMP50.

Bird, it just so happens, was primarily a manufacturer of electronic organs, and it approached amplification more like a hi-fi manufacturer than a guitar-amp maker. With the goal of building clean-sounding amps, it rendered many rather anemic; the smaller Golden Eagle 2/15, for example, with a pair of EL84s, is severely constricted by its ultralinear output stage. This big one, then, might have been a happy accident; with a pair of cathode-biased EL34s and a big output transformer unfettered by ultralinear aspirations, the 4/25, says owner Mike Tamposi, absolutely roars while still providing plenty to ponder in a fussy and unusual circuit.

In addition to organs, Sydney S. Bird & Sons, of Poole, Dorset, did make several nifty guitar amps between around 1959 and ’65. Quality-wise, they were more on par with Watkins and Selmer than Vox and Marshall, but several carried interesting features. This Golden Eagle 4/25 seems to have been the flagship. And while the bones were more robust than some of the company’s other offerings, its bells and whistles were mostly sub-par. Tamposi said both of his 4/25s are finicky.

“They remind me of my Selmers, but with printed circuit boards instead of standard point-to-point style wiring,” he said. “And while Bird used cheap caps and resistors, the transformers look like Drakes. It’s supposed to have an echo effect, but I can’t get it to work on either amp.”

His latter observation seems common, likely due to the fiddly nature of the “echo” circuit, which itself relies on the fiddly nature of the reverb circuit. The spring pan uses a crystal gramophone cartridge at each end to transmit and receive signal. These units sound interesting at best, though not as lush as the types used by Fender and Ampeg, and they’re prone to breakage. Bird’s Repetitive Echo effect used a tube-driven network to tap the spring at different points to produce a pre-set pseudo echo, with (it would seem) short-lived success.

Otherwise, from preamp to output stage, the Golden Eagle 4/25 follows familiar British circuit topology derived from Mullard’s applications manuals of the day, siblings of which are seen in some Vox and Selmer peers. Each channel has its own EF86 pentode preamp tube (a third drives the reverb), followed by a Volume potentiometer linked to a simple treble-bleed Tone pot. Skipping around the befuddling complement of effects – and making its way from the upper preamp chassis to the lower output-stage chassis via a cumbersome umbilical cord – the signal from each channel hits a sturdy long-tailed-pair phase inverter populated by an ECC83 (a.k.a. 12AX7). From there, it’s on to the EL34 output tubes which are independently cathode-biased with individual 470-ohm resistors and 50-microfarad bypass caps. All in all, the configuration makes Bird’s 25-watt rating fairly likely, even possibly conservative, though the same setup in a fixed-bias output stage fed with higher voltages might generate in excess of 50 watts. Rectification comes from another British standard, a GZ34 tube, and Bird included a hefty choke in the power-filtering line to help keep the tone punchy and the lows beefy.

This amp’s lower chassis has pencil-written legends for KT66 tubes in the output positions, though other Golden Eagle 4/25s carried the same EL34s; the schematic we’ve seen also calls for EL34s, and not only is Tamposi’s other example loaded with them, he’s fairly certain all of the tubes in this amp are the original Mullards. So, perhaps KT66s were a design whim that never got off the ground?

All of this 25-plus watts is pumped into a hulking 15″ Wharfedale W15/EG speaker adorned with a spec label that cooperatively reads “10-15 ohms.” Relatively robust for its day, it might still have balked – or simply folded – at the full force of the cranked 4/25, but Tamposi doesn’t take any such chances when he wants to set loose the Golden Eagle.