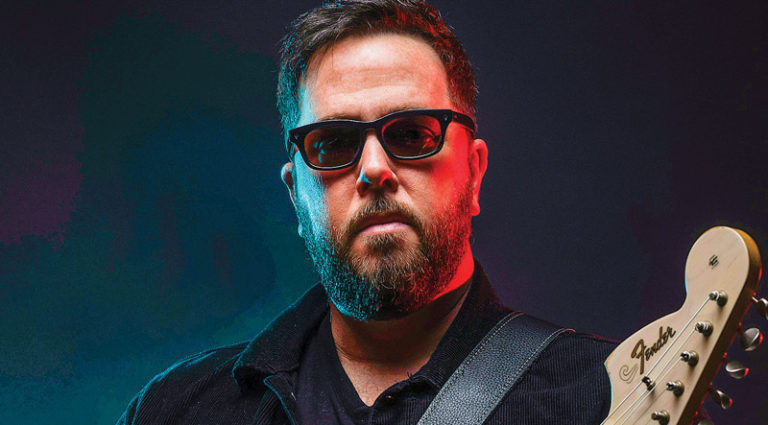 Unphased by knee-jerk comparisons to rock duos like the White Stripes, Royal Blood, and Black Keys, The Cold Stares have nothing to worry about. Their teeth-rattling blues-rock sound is heavier than anything those bands could dream of. Guitarist Chris Tapp is the fuzz wizard behind the band’s literary and sonic persona, and their current album, Heavy Shoes, is the sound of a monster walking.

What are the disadvantages of being in a power duo?

It would sometimes be nice to have a bass player or an organ to hold things down for me to explore a little bit. It’s frustrating sometimes. If I make a mistake live, then I’ve made a mistake for two guitar amps and a bass amp – I’ve screwed it up for the whole band (laughs). I play solos in a hole. I have half a bar to play a solo then come back in. At the same time, it’s made me a better guitarist and helped me refine my songwriting.

Your lyrics are loaded with harsh times.

If you go through a divorce or cancer, all that stuff eventually creeps into your songwriting. As soon as I got through treatment and stopped putting up walls, I started letting my emotions come into the songs. Certain songs reflect my grandad dying, but I’m not specifically writing about that. I’m allowing sentiment to come through. Somebody else may not have gone through cancer, but maybe they lost a son, a daughter, and have gone through the emotions. When you feel that in the emotions of someone else’s songs, you feel like you’re not alone. It’s certainly done that for me.

“Strange Light” is such a great tune.

That’s the one I hoped the label would’ve used as the single. I’ve been working the last couple of years learning how to make the guitar sound big. Not that it’s giant in the mix, but in the way it has depth. That song has multiple guitar tracks. I have a De Lisle ABY amp switch that allows me to play through four amps at once and that song has a Friedman Dirty Shirley, an old Super Reverb, and a fuzz. I wanted it fuzzy, but I wanted a different flavor, so I mixed in a normal amp with one that’s fuzzed, then panned them. I’m also carving out space where the verses aren’t so big, so the choruses light up. So I’ll have two guitars and two amps panned for the verses, then when the chorus hits, an old Fender amp comes straight up the middle. I was happy with the way that came out.

Which fuzz are you using?

I used two on “Strange Light”; the chorus is the King Tone Mini Fuzz, the other is the EarthQuaker Devices Dirt Transmitter, which has a bias control where you can get it to where the speakers are ripping without going over the top. You can also get it to make a great distortion sound. I have the Dirty Shirley running on one side, with a classic rock-type sound. The Dirt Transmitter is running through the ’68 Super Reverb.

You’re running an Octavia, as well.

Yes. Live, my first amp gets the guitar’s regular signal. The second amp is one octave down. The third is two octaves down and runs through a bass rig. I use a TC Electronic Sub ’N Up Octaver for a bit of the octave up or octave down, to thicken the tone. Anything that has heavy riffs is a little bit of octave. I’ve been doing that live, so I don’t want to overdo it in the studio. It thickens everything up and helps with the clarity and separation of notes.

I put it together using a Fender Custom Shop Meteora body, which is between a Jazzmaster and some kind of spaceship-looking thing. I thought it was cool. Ed Magee (Executive VP of Operations) at Fender said, “Why don’t you make this guitar yours?” When you see a Les Paul, you think of Jimmy Page. When you see a Strat, you think of Jimi Hendrix. I love old guitars, but I wanted something I could brand with. So, I put a reverse Strat headstock on the body, installed TV Jones pickups, and added a Bigsby. A year later, I got a white one with EVH humbuckers, and those are my two main guitars; they’re super light and super comfortable. They get me in Les Paul territory, which is the sound of this band.

We have 13 weeks in Europe where we play Germany, France, Belgium, and Holland. Then we come back and start writing the next record.