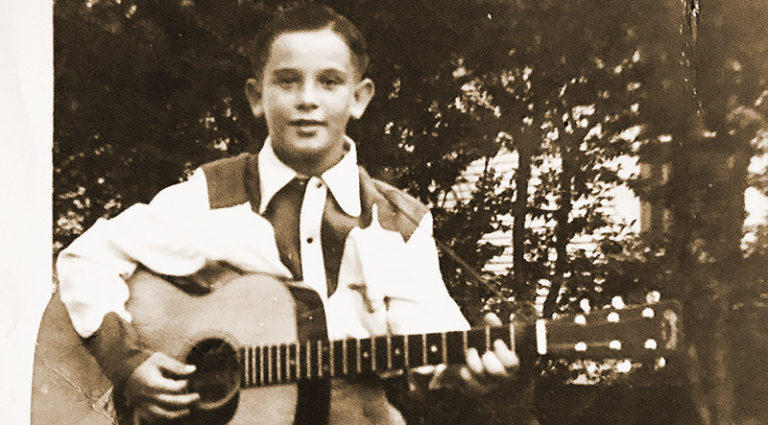 Nashville legend Jerry Kennedy has won Grammy awards and owned numerous collectible instruments. And if Guinness World Records tracked such things, he’d likely own the mark for most years passed between having a guitar leave his world, then return.

As a youngster in Shreveport, Louisiana, Kennedy showed promising musical ability early on, under the tutelage of bassist Tillman Franks.

“I started trying to play guitar when I was five years old,” Kennedy recounted. “I owned a couple of cheap guitars; the one I remember most was a Gene Autry Harmony. My actual playing came after Tillman taught me a few chords when I was nine.”

Kennedy’s father took his son to Franks for his first guitar lesson one Friday afternoon in late June of 1950. That day, Jerry learned to play “How Far Is Heaven.” The following Monday, the elder Kennedy died. Later that year, Jerry’s mother bought a Martin 00-18 (serial number 114232) so he could continue to learn.

“Tillman became like a father to me,” Kennedy said. “He was so kind, and when his schedule was overloaded, he allowed me to teach lessons to other students. I was always impressed with all of the people he knew; he introduced me to the ‘Louisiana Hayride’ stars.”

One day, Franks lent the 00 to another musician under whose watch it fell from the roof of a car and was damaged so badly that Franks bought a new Gibson J-50 for Kennedy.
For decades, Kennedy assumed the Martin had been destroyed – until he received a call in early 2021 from Franks’ daughter, Darlene, asking whether he wanted his “old Martin” back.

“She put me on my heels,” said Kennedy. “I hadn’t even thought about that guitar in 70 years.”

The details are nebulous, but the 00 had apparently been repaired and remained with the Franks family, where it was used by Tillman’s son, Ben.

“When I started playing in 1973 or so, Daddy gave me a baby Martin,” said the younger Franks. “He told me it was the guitar Jerry started on. I kept it a long time, and around 2001 lent it to a Hank Williams impersonator who never returned it. My cousin, Murray, found it in a pawn shop in 2004 and we got it back for $200.”

In early February, Kennedy’s oldest son, Gordon (VG, October ’07), and his friend, Kevin Butler, journeyed to Shreveport to pick up the instrument. After visiting with several members of the Franks family, they returned home to Nashville. Gordon recalled his father’s reaction, seeing the guitar.

“When I handed it to him, he didn’t look like someone who was holding a guitar as much as he was holding a piece of his life. His mother, having been recently widowed, bought the guitar for him.”

“It was like seeing a childhood friend who meant a lot to me,” said Jerry.

In May, the 00-18 was sent to Martin, where glue was applied to its loose braces and rosette as well as to cracks on the headstock and body. The neck was re-set, pickguard replaced, and the nut was shimmed.

Fellow Nashvillian Peter Frampton compared Kennedy’s 00-18 to his own ’54 Les Paul Custom “Phenix” (VG, July ’19) which was lost for more than 30 years before being returned in 2013.

“Gordon told me the story and I got chills,” said Frampton. “It’s another great tale about a much-loved instrument finding its way home. I said to Gordon, ‘Seventy years later? Wow, your dad has me beat by almost 40 years!’ What a great ending!”