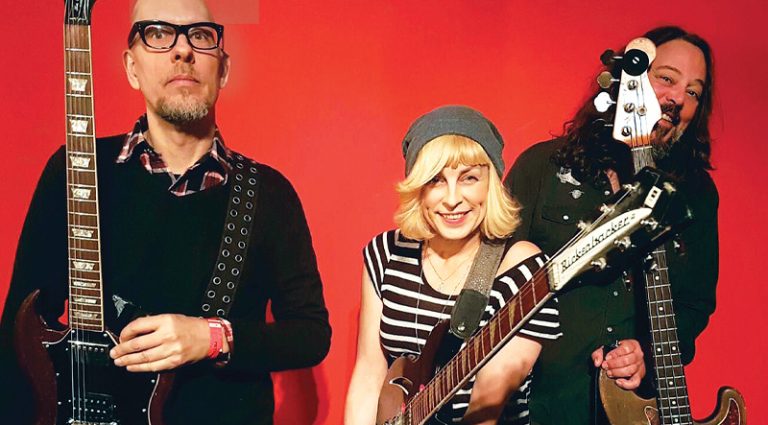 Bettie Serveert is still going strong, 25 years after bursting on the scene in Amsterdam at the height of alternative rock.

Did you do anything differently for Damaged Good, in terms of writing or recording?

van Dyk: Every album is new adventure, and our daily life has an impact on our songs. We don’t sit down and say, “Let’s write a song.” Sometimes, a song will write itself and all you have to do is let it happen. Peter and I had done a project with [producer] Jesse Beuker in Australia in 2009 (Me & Stupid), so when we heard he built a studio in Amsterdam, we went to visit. Shortly after, we started recording.

Visser: A Gibson SG 1968 with a 490 in the neck and 498 in the bridge, both now with Alnico II magnets, a Frankenstrat with great-sounding ’70s Strat-style pickups, and a pimped-out ’75 Ibanez Les Paul copy with Gibson ’57 Classic pickups, Grover tuners, and cavities filled with mahogany.

Bunskoeke: My workhorse, a ’69 Fender Precision I found on a wall in a little studio. I was lucky.

Bunskoeke: In the studio, I plug straight into the mixing board, and live I use a Fender Bassman with an Ampeg 4×10.

van Dyk: I don’t use much… mostly the Marshall’s distortion channel and a couple pedals Jesse had lying around. Live, I never use effects because as a rhythm player, I don’t really need them. Maybe that’s why I’ve always been a big fan of Mick Ronson.

Bunskoeke: I use a Tech 21 SansAmp, an Electro-Harmonix Bass Preacher compressor, and a tube radio for rough edges.

One of the highlights is your duet with singer Peter te Bos on “Lovesick.” How’d that come about?

van Dyk: We’ve known Peter since the late ’80s, and in the early ’90s we shared practice space with his band. While recording “Love Sick,” we lowered the pitch of one of my backing-vocal tracks, and we said, “It sounds like Peter te Bos!” So, we called him, and we’re very honored he did the duet.

“Digital Sin (Nr 7)” is another highlight, but it’s a bit out-there.

Peter: Joppe and I were jamming a lot, and we recorded all of that. It sounded like an abstract piece of prog-rock until Carol added vocals and shaped the chord structure.

van Dyk: I totally didn’t get Peter and Joppe’s idea. I’ve never been good at jamming, but I like writing songs. So I listened, then asked, “What’s the beginning, what’s the middle?” At home, I’d recorded a rough demo of “Love Sick” and there’s a specific melody I play in the bridges that’s basically the same as when the first verse starts in “Digital Sin.” Peter and Joppe mainly wrote the first half, and I added the last half!

Visser: There are, relatively, a lot of vintage shops in Holland. In Amsterdam, there are three used-gear shops I visit on a regular basis – but not too often because the urge to buy might get the better of me!

Are you planning to tour the U.S.?

van Dyk: We’d love to, but we have day jobs and pay for everything ourselves, so won’t be able. Never say never, but any foreign artist/band needs a work permit, which is expensive and takes about five months to get. And if you get denied, you don’t get your money back.

Twenty-five years together is a huge deal for a band. How does it feel?

van Dyk: We’re really grateful there’s still an audience that wants to hear us play, because at the end of the day, they decide whether we can tour! The fact that Peter, Herman, and I have been close friends for more that 30 years is probably the main reason we’re still together, because we’re family. A dysfunctional family, but still, a family.