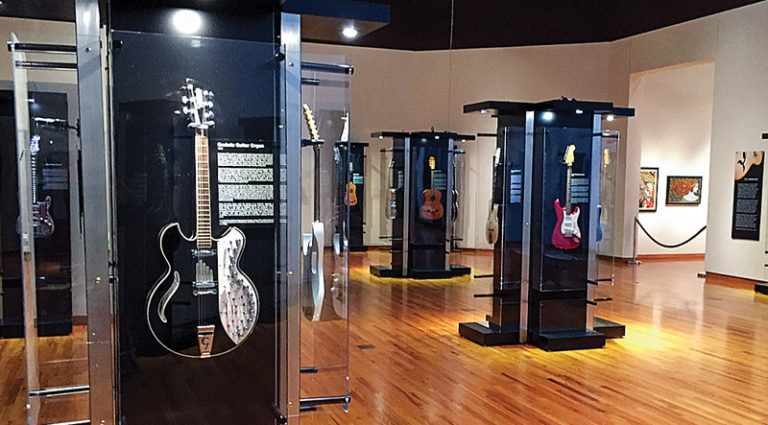 The National Guitar Museum, which has toured the U.S. for more than a decade, recently opened an exhibition titled “Medieval to Metal: The Art & Evolution Of The Guitar.” We asked director H.P. Newquist to share a bit of insight on it.

When visitors see “Medieval to Metal,” what are some common reactions?

They’re often surprised at the breadth of shapes, colors, and materials that are part of the guitar universe – the aluminum National resonator, red-acrylic B.C. Rich, or an emerald-flame Teisco. Experienced guitarists often want to know the rationale behind oddball features like the Craviola’s quasi-teardrop shape or our Silvertone 1487, which has a built-in speaker.

How far back do stringed instruments go?

To at least 3000 BCE; anything before that is considered pre-history.

And when did the six-string guitar become popular?

In the early 1800s, coinciding with the beginning of the Romantic movement; guitarists began playing melody notes on individual strings instead of strumming double courses, compelling them to adopt the design.

We don’t often see clarinets or upright basses being transformed into ornate objects. Why are guitars so often imbued with artistic decoration?

That goes back to inlays and rosettes on ouds; Arabic designs were incredibly intricate and often used repeated inlay patterns. For electrics, that can be traced to Leo Fender’s awareness of Southern California car culture. He painted instruments in Detroit car colors, using the exact same paint. Fender designer Freddy Tavares further broke out of the single-cutaway concept by using a French-curve template to draw the Strat, which changed everything for luthiers.

As a nation, America became wired for electricity in the 1920s. Then, in the ’30s, Rickenbacker’s lap-steel changed music.

Rickenbacker was the first company to mass-produce electric guitars, and the impetus for electrification was that early steel-guitar players couldn’t hear themselves over the rest of the band. Lap steels – played face up – were used primarily by Hawaiian bands touring America in the ’30s. Rickenbacker co-founder George Beauchamp added the horseshoe pickup, which made projection a moot point. Later, when jazz, country, and blues guitarists saw what Hawaiian players were doing with electricity and amplification, they wanted it for themselves. That prompted Paul Bigsby, Leo Fender, Paul Tutmarc, Les Paul, and others to create guitars that could be played face out, and not necessarily on the lap.

During the Cold War, Russia wouldn’t do business with the West. Yet, Russian teenagers – like those everywhere in the ’60s and ’70s – heard guitar-driven rock and roll and wanted to play it. To appease potentially rebellious youth, several Russian factories were converted to guitar production with no understanding of how to do that. They used military electronics and cheap plywood for bodies and necks; the electronics were produced to Russian specs, not Western standards. This created ungainly guitars that looked and felt like tanks.

In terms of art, which is the most beautiful in the show?

I’d say the ’70s Godwin Guitar Organ, which is an example of sleek Italian design with its 19 switches and 13 knobs. Also, the Hagstrom Goya 80, which was manufactured in the early ’60s from accordion materials including white pearloid for its fretboard and appointments, the sparkle finish, and the pushbuttons.

The Stratocaster remains one of the best-selling guitars of all time. Why?

The Strat is buried in our collective subconscious as the definitive electric guitar. It was also designed to deliver more playing comfort and tonal variety.

What’s the most popular guitar in the show?

The most popular one for selfies is the Air Guitar – yes, we display one – but most players want to get their hands on the late-Renaissance-era theorbo, probably because it’s six feet long and has 16 strings.

In putting together the show, what did you personally learn about the evolution of the guitar?

One thing that strikes me over and over is that, with the invention of the amplified electric guitar, people heard a sound they’d never heard before. That’s a significant turning point in human history. No wonder recordings like Link Wray’s “Rumble” scared the previous generation.

Where will the exhibition be appearing next?

It will be in Pennsylvania until January 9, then goes to the Lauren Rogers Museum Of Art, in Mississippi, from January 25 until April 17, then it goes to The Powerhouse, in Durango, Colorado, for four months beginning May 1. Our larger exhibit, “Guitar: The Instrument That Rocked The World” will be in Denver through April.