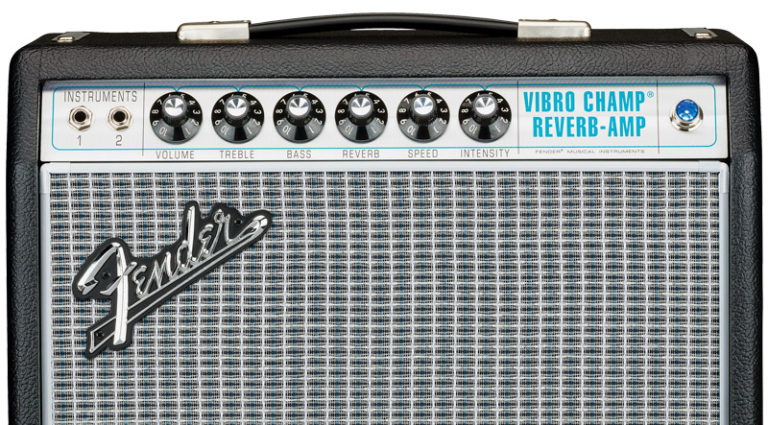 The original Vibro Champ was a small wonder with big tones that produced five watts of unadulterated glory. The new ’68 Custom Vibro Champ Reverb takes the original to the next level by adding era-friendly Hall reverb and a bigger 10″ Celestion speaker to beef up the low-end. With two inputs along with controls for Volume, Treble, Bass, Reverb, Speed, and Intensity, the Custom Vibro Champ is the very definition of plug-and-play. The clean reverb sounds are stunning with just the right combination of girth and shimmer.

This amplifier exists in the sonic zip code of surf, old-school country, rockabilly, and traditional blues, but jazz guitarists will dig it, too. Thanks to its Custom Ten 30 speaker, it produces everything from dreamy sparkle to pint-sized SRV sounds. Weighing in at a tad over 20 pounds, it uses two 12AX7 preamp tubes and a single 6V6 in the power section. Its custom-made Schumacher transformer is like the original, and there’s tube-driven tremolo, classic 1968-style silver trim, and silver-turquoise grillecloth.

While this ’68 can send a player into a long-term musical trance all by its lonesome, it embraces overdrive pedals and time-based effects like family. Used with a Richie Kotzen Signature Telecaster, a Les Paul Traditional, and a Frankenstrat, the Custom Vibro Champ showcased the guitars’ individual personalities under the banner of lush and ungodly. Veteran guitarists know the benefits of recording a small amp cranked up in a big room, and this amp is perfect for that situation. Humbuckers push its front end in the most beautiful way while single-coils sing sweetly with upscale warmth and superb clarity. Plus, the tremolo pulses organically with a range of intensity and speed levels.

Though louder than its ancestor, the ’68 Custom Vibro Champ Reverb is not quite loud enough for a typical band setting. But, it is perfect for practice, low-volume gigs, and recording. Best of all, it can be cranked for delectable low-volume grind. Highly recommended.