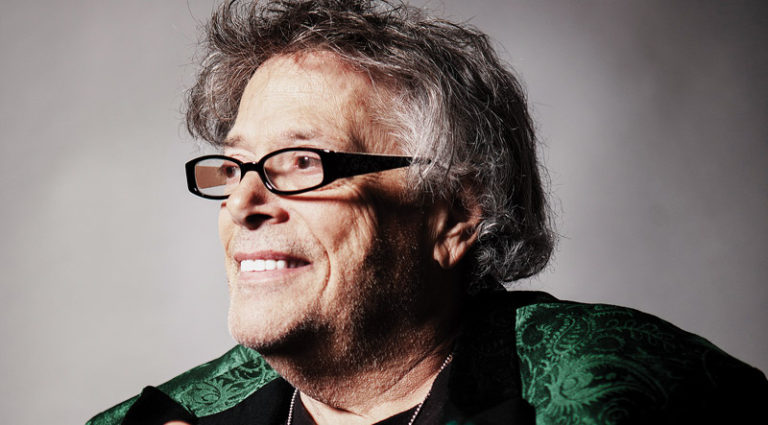 Leslie West, guitarist/frontman in the pioneering hard-rock band Mountain, died December 22, 2020, after going into cardiac arrest. He was 75 and had suffered a heart attack two days prior.

Born Leslie Weinstein, he grew up in New Jersey and New York City and, as a teen, listened to the music of The Who, Rolling Stones, the Beatles, and John Mayall Bluesbreakers (with Eric Clapton). His mother gave him a ukulele when he was eight years old, but he soon started to learn guitar after seeing Elvis perform on television.

In 1964, he co-founded The Vagrants with younger brother, Larry, and two neighbors – vocalist/harmonica player Peter Sabatino and Bobby (later “Waddy”) Wachtel, who agreed to play drums for their first gig. Roger Mansour was soon added on drums, along with keyboardist Jerry Storch.

In 1965, The Vagrants recorded their first single, “Oh Those Eyes,” then in early ’66 had a minor hit with “I Can’t Make a Friend.” Looking for a second, the band’s label, Vanguard, hired Cream producer Felix Pappalardi to help write “Beside the Sea,” which failed to chart. In ’67, their cover of Otis Redding’s “Respect” (recorded for Atco) saw regional airplay. The band dissolved in mid ’68.

In ’69, West put together a band with keyboardist/bassist Norman Landsberg and drummer Ken Janick. Dissatisfied with playing blues, West wanted to play a harder, more-raw style akin to Cream with Eric Clapton. The trio began playing gigs and recording demos, some of which he sent to Pappalardi. The producer declined to work with the whole band, but instead produced West’s debut solo album — titled Mountain — on which Pappalardi played bass. During the sessions, Felix also helped West upgrade from his Hagstrom guitar to a sunburst Les Paul Junior acquired at Matt Umanov Guitars.

“The pickup was so powerful,” West told VG in December, 2011. “It just happened to be the right guitar at the right time. And then, all the English groups we toured with – Mott the Hoople, Martin Barre with Jethro Tull, [would say] ‘Wow! Where’d you get that?’ I used to call it a tree with a microphone on it. It was the most-basic guitar made.”

In early ’69, West and Pappalardi hired keyboardist Steve Knight and drummer N.D. Smart to tour. The band took on the name of the album and set out for the West Coast, but after just two shows they returned east after being booked to play the Woodstock festival. Soon after, Corky Laing replaced Smart on the drums as the band prepared to enter the Record Plant to create what would be its landmark album, Climbing!. Released March 7, 1970, the disc reached #17 on the Billboard albums chart, propelled by the single “Mississippi Queen,” which reached #21 on the Hot 100 singles chart and has since become one of the most-cited songs amongst guitarists, for its tone and West’s playing.

In a 2010 conversation with VG, West reflected on his own playing style.

“Felix (Pappalardi) said, ‘You should be able to sing a solo. It’s like a song within a song.’ And I wanted to make sure people remember my solos. I didn’t want to get to a part of the song where it was just time for a solo.”

In ’71, West contributed to The Who’s Next sessions (playing lead on two tracks that didn’t make the final cut), during which he gave his Les Paul Junior to Pete Townshend.

By the late ’70s, West was recovering from addiction. In various interviews, he cited his own addiction for Mountain’s failure to record or tour consistently, adding that it also impacted his work in West, Bruce & Laing. He was later diagnosed with diabetes, and the condition forced him to have his right leg amputated in 2011. In the early 2000s, he overcame bladder cancer. In ’06, he was inducted to the Long Island Music Hall of Fame.

West played a variety of other guitars throughout his career, including a Les Paul TV model, a Flying V with a P-90 bridge pickup, an Electra copy of an Ampeg Dan Armstrong (for slide), a Westone Pantera, an MPC with onboard effects, and Dean guitars including a signature model Soltero.

Wachtel recalled first meeting West, and how the encounter led to a lifelong friendship.

“One day, I was doing my usual – cutting school to stay home and listen to records while I played guitar,” he said. “I’d been playing since I was nine and my ear has always been pretty good, so I’d learned a million tunes by then. Anyway, I heard guitar being played somewhere in the other building [across a common area]. I Columbo’ed my way toward the sound, going to every floor, sticking my ear to doors until I found the one.

“I banged on the door, and this guy answered in a suit jacket and tie. I said, ‘Sorry to bother you, but are you playing guitar?’ He goes, ‘Yeah…’ and I could tell he was just starting out so I went, ‘My name is Bobby, and I can help you. I can show you some things.”

The two bonded immediately and for the next year spent most of their free time together. “We loved guitars, loved music, and loved hanging out,” Wachtel said. “He was a funny guy, I was a funny guy. He was cutting work, I was cutting school.”

West recalled having learned much about music and guitar from Wachtel.

“Bob was so talented. I remember, as soon as the Beatles would come out with a new song, like ‘I Feel Fine’ or ‘Ticket to Ride,’ he would figure it out so fast that in the time it took me to go down my elevator, go to his side of the building and up that elevator, he knew the song already!”

They lost touch after Wachtel moved to Los Angeles in ’68, but Wachtel remembers the thrill of first hearing West playing on a Vagrants record, and later how much he appreciated his friend’s work in Mountain.

“When I realized it was Leslie, I went out of my mind,” he said. “I was so proud and happy – that was my student! I couldn’t believe it.

“In Mountain, he captured what was missing at the time.
Clapton went away and he filled that spot very well – that clean-sounding Les Paul through an overdriven amp, bending notes in tune. Nobody else was doing that. All you had to do was hear ‘Mississippi Queen’ once and you loved his playing.”

West later performed under his own name in addition to fronting Mountain. The final Mountain album, Masters of War, was released in ’07 and his final solo album, Soundcheck, in ’15.

“Leslie is an all-time hero,” guitarist Steve Lukather told VG. “His tone and vibrato set my heart on fire. I saw Mountain every time they played L.A. – I waited in line all day to see West, Bruce & Laing at the Hollywood Palladium when I was a kid, so I could see him up close. Later in life, I was honored to become a friend and got to play acoustic on one of his albums. I loved him as a person. What a funny f***er he was. God bless him and what he left behind for us all. I will miss him – we all will.”

Jay Jay French, a fellow NYC kid who, before co-founding Twisted Sister, was a regular in clubs where he watched bands like Blind Faith, Free, and Spooky Tooth, fondly recalls first seeing Mountain.

“It was there and then I learned the power of a single note played through two Sunn 1000S amps and a Les Paul Junior,” he said. “Like Albert King, Leslie knew how to play one note with feeling – which sounds so simple, but is not. What he did was to take an aspect of Eric Clapton’s style and amplify its technique and sound to its most basic, emotionally connective elements. Controlling finger vibrato is what great violin players do. Great electric guitar players also have that ability, and Leslie was the king. The melding of his sound and vibrato control made the searing guitar solos on ‘Mississippi Queen,’ ‘Theme From an Imaginary Western,’ and ‘Never in My Life’ so incredible.”

West is survived by his wife, Jenni, brother Larry, and one nephew.