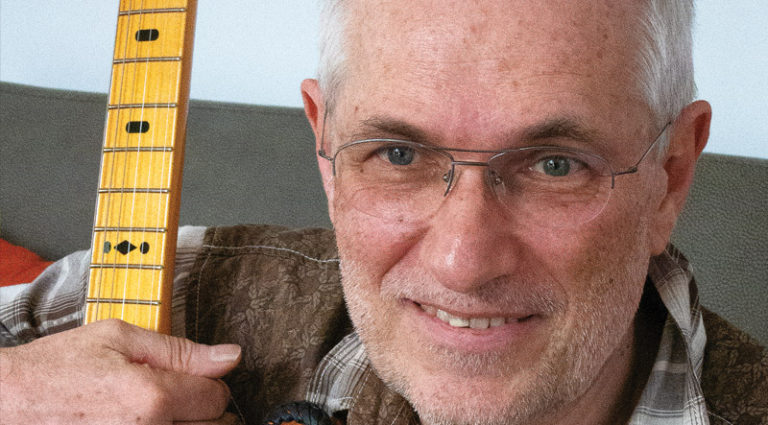 André Duchossoir, author of renowned books Gibson Electrics: The Classic Years, The Fender Telecaster: The Detailed Story of America’s Senior Solid Body Electric Guitar, The Fender Stratocaster: The Success Story of a Legendary Guitar Born and Made in California, and Guitar Identification: A Reference Guide for Dating Guitars Made by Fender, Gibson, Gretsch, and Martin passed away November 17. He was 71 and battled cancer.

Duchossoir grew up in Paris and became interested in guitars as a child thanks to his father, a session musician who owned several including a ’55 Gibson ES-350T and ’61 ES-175D, Epiphones, Selmers, and Fender Jazzmasters and Jaguars. The elder Duchossoir also indulged his son’s fascination for early rock and roll; together they listened to Bill Haley’s “Rock Around the Clock,” keying on Danny Cedrone’s guitar work. They also listened to the music of Charlie Christian, Wes Montgomery, Barney Kessel, and Johnny Smith. Young André further enjoyed the music of Frank Sinatra and vocal groups like the Hi-Lo’s and Four Freshmen.

By the ’70s, Duchossoir was a banker by trade, and an adamant guitar collector on the leading edge of the hobby. His quests for information evolved into the research that became authoritative pamphlets and books for which he was known to spend months, even years, documenting brand and model histories. Lore includes his being voluntarily locked in Gibson’s offices overnight while researching log books and model lists.

Duchossoir’s books are highly regarded by collectors, enthusiasts, and dealers for their thoroughness and accuracy. In the ’80s, he wrote pamphlets on Gibson and Fender instruments that provided some of the most-authoritative information at the time. He was long known in the community for his willingness to share his knowledge with anyone who asked, whether at a guitar show, instrument shop, or online.

Vintage-instrument dealer and VG contributing editor George Gruhn first met Duchossoir within a few months of opening his shop in 1970.

“I’m pleased to have known André as a personal friend as well as a customer,” Gruhn said. “He was a meticulous researcher, and his work greatly added to my knowledge and played a significant role in promoting the vintage-instrument market by educating dealers and the public. He was one of the first to write authoritative books on the history of Gibson; Gibson Electrics: The Classic Years and his final book, Gibson Electric Steel Guitars, remain absolute classics in their field.”

John Peden, a noted collector of vintage amps and guitars, first met Duchossoir in the early ’80s, when he was promoting Gibson Electrics. A professional photographer, Peden was later hired to shoot guitars for a Guitar World feature by Noë Gold.

“It was a memorable excursion, with André, Noë, and Perry Margouleff,” he said. “Gibson Electrics set the bar for quality photography and printing on the subject of vintage guitars, but on that trip, I discovered André was passionate and knowledgable about Fender guitars, as well.”

“André was a great, sincere, and generous guy with a strong commitment to accuracy,” Peden added. “In subsequent years, I’d meet him every year for lunch in Paris, and he was always interested in the latest discoveries stateside. I’m proud to have called him a friend.”

and smoking Gauloises. Through a cloud of smoke, we’d discuss the minutest details of American guitars. He was so passionate about the subject; I hadn’t then met anyone in America who was as dedicated. He was a true brother. I loved him and will miss him dearly.”

Gold, founding editor of Guitar World, recalled meeting the “eccentric and bookish” Duchossoir when he partnered with Peden.

“He was always there for us with his blinding exactitude as to every detail,” Gold said. “He was also helpful on Richard Smith’s 2008 exhibit on the Telecaster, which I contributed to, at the Fullerton Museum Center.”

“His passion for these guitars had never stopped,” added Francois Charle, who assisted in the research for Gibson Electric Steel Guitars. “He [liked] to share the love of beautiful instruments.”

“I first met André just after Gibson Electrics came out in the early ’80s,” said vintage-instrument dealer Timm Kummer. “I was a newbie, but he treated me like an expert even then. His books are some of the best reference material on the subjects. It’s a nice coincidence that the last guitar I sold him was a Gibson EH-150 with the rare aluminum body – one of the pioneer vintage guitars.”

“A day hasn’t gone by in the last 35 years when André’s books haven’t been essential reference material for our business,” added Dave Rogers, another veteran dealer.

“My copies of Gibson Electrics, The Fender Telecaster, The Fender Stratocaster, and Guitar Identification are very well-worn,” he said. “In the ’80s and ’90s, if you had those and Gruhn’s Guide to Vintage Guitars, you were set.”

“If you built a shelf for vintage-guitar reference books today, it would be 20 feet long,” added Nashville dealer Walter Carter, author of Gibson Guitars: 100 Years of an American Icon, The Epiphone Guitar Book, and co-author of Gruhn’s Guide. “But in the early ’80s, there were only four – Tom Wheeler’s American Guitars, Mike Longworth’s Martin Guitars: A History, and two by a French guy with a hard-to-pronounce name. The scope of Wheeler’s and Longworth’s research was impressive, but the fact that a full-time banker in Paris knew more than any American knew about American guitars was mind-boggling.

“After corresponding by fax for a few years, I met André at the Arlington Guitar Show in the early ’90s. He had a blackguard Telecaster in his lap – not playing it, but measuring the pickup resistance. I remember thinking, ‘What else could there be to know about those pickups?’ I would find out soon enough, when his Tele book was published.

“André swore off guitar research after his obsession cost him a marriage, but he eventually relapsed,” Carter added. “Our correspondence picked up again when he decided to dig into banner-head Gibsons and Gibson lap steels – two areas where I shared his interest. He may be gone now, but the integrity of his work still holds my feet to the fire when I’m writing about guitars.”

“In the early ’80s, vintage-guitar converts were living in an information wasteland, and many turned to books,” said Richard Smith, author of Fender: The Sound Heard ’Round the World. “André’s tomes on dating and identifying axes filled the gap. I met him at the Fender Custom Shop in 1987 and thought to myself, ‘How amazing – a bilingual writer totally versed in vintage arrives just as the market is surging.’ Already an expert on Gibson, he came to Corona to research his Telecaster book, and one of the first things we did together was lunch with Freddie Tavares.

“André’s books came at the perfect time, giving an ever-expanding group of old-guitar followers just what they needed, and he had done his homework.”

Tom Mulhern first met Duchossoir while covering a Gibson event for Guitar Player in 1978, when authorized repair people would go to Kalamazoo to learn new techniques.

“On my last day there, I was talking to Ted McCarty, who wanted to chat about how everyone at GP was doing, then André showed up – unannounced, I believe,” Mulhern recalled. “He was working on what would become his first book, and started asking Ted a bunch of questions and wanting to go through his files. He was such a nice guy – very earnest.”

“We all have a passion that sometimes drives us to extremes that can be life-altering,” added VG contributor Lynn Wheelwright, an authority on early electric stringed instruments. “My brush was getting a copy of Gibson Electrics. The groundbreaking research between its covers has stood the test of time. André was a consummate researcher, and his use of primary documents to lay out the story was something I took to heart early in my research. A habit that, though expensive and time-consuming, has great reward.

“André was one of the driving forces in the interest in vintage guitars. His research and writing on Fender and Gibson were the first bibles of accurate information, and it was an honor to have worked with him – my mentor and friend – on a number of projects. I will forever miss our conversations.”