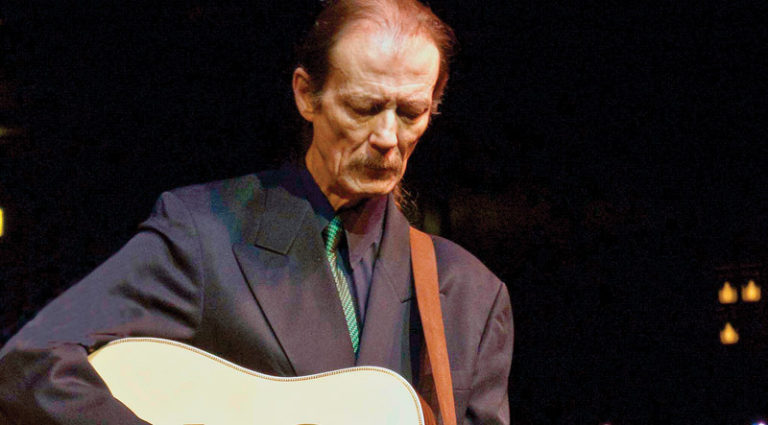 Tony Rice, the guitar master and vocalist whose skills and eclecticism took him far beyond his bluegrass roots, died unexpectedly at his North Carolina home on December 25, 2020. He was 69, and had ended his active career in 2013 due to physical issues that prevented him from playing without discomfort.

Deeply influenced by Clarence White’s flatpicking, Rice raised the bar for bluegrass guitarists. As a soloist, his fluid, superbly articulated solos were marked by cascades of cleanly picked notes, always appropriate, often injecting new harmonic ideas. Flash for its own sake was not part of his vocabulary. His rhythm playing was smooth and propulsive.

“Tony is easily the gold standard of my generation of how to play and sing bluegrass,” said longtime friend Vince Gill.

Gill is correct, yet Rice’s panoramic, complex musical vision transcended bluegrass and embraced jazz and modern folk music. He moved effortlessly between them in a multitude of settings. Admired by his peers, he also inspired younger talents including Bryan Sutton, Molly Tuttle, and Billy Strings.

When the Rices moved to Los Angeles, Herb joined the Golden State Boys, contemporaries of pioneering West Coast bands the Kentucky Colonels, with Clarence and Roland White. When the nine-year-old Tony met White at a 1960 show, he allowed the youngster to try his 1935 D-28 with its enlarged sound hole. Rice never forgot.

His profile grew when he moved to banjoist J.D. Crowe’s band, New South, which included Ricky Skaggs and dobroist Jerry Douglas. Their self-titled 1975 debut album, now considered a landmark, made them a major force in modern bluegrass. Rice’s intense solos on “Nashville Blues” and “Sally Goodin’” reflected his evolving skills.

Also in ’75, Rice acquired White’s D-28, which he had let go in ’65, before he went electric and created his famous B-Bender Telecaster. Rice purchased the Martin from its then-owner and it became iconic in his hands, known by its serial number, 58957. It also inspired the Tony Rice models built by his friends at Santa Cruz Guitar Company.

None of that ever diminished his unswerving commitment to bluegrass and folk music, reflected on his Manzanita album. Skaggs & Rice, released around the same time as Acoustics, featured the two friends with guitar and mandolin, harmonizing on venerable traditional tunes.

Rice performed and recorded in a number of settings; there were collaborations with flatpicking great Norman Blake, with jazz guitarist John Carlini, and six albums with J.D. Crowe and the all-star Bluegrass Album Band. He won acclaim for solo albums like Church Street Station, reunited with his siblings, and later teamed with bluegrass-folk veteran Peter Rowan.

Muscle Tension Dysphonia, a syndrome affecting his vocal cords, forced him to quit singing in 1994. For nearly two decades, he persevered as an instrumentalist, including a stage/studio collaboration with his brother, Larry, Chris Hillman, and Herb Pedersen.

Worsening tennis elbow made playing painful, leading to his last public performance with Skaggs, Bush, Wyatt Rice, and Jerry Douglas at his 2013 Bluegrass Music Hall of Fame induction. He later declared he was “…not going [back] into the public eye until I can be the musician that I was, where I left off or better.”

Rice’s legacy, which already influenced generations of players, will endure well into the future. Skaggs, who announced Rice’s death, echoed Gill, calling his old friend, “the single most influential acoustic guitar player in the last 50 years,” adding, “Many, if not all of the bluegrass guitar players of today would say that they cut their teeth on Tony Rice’s music.”