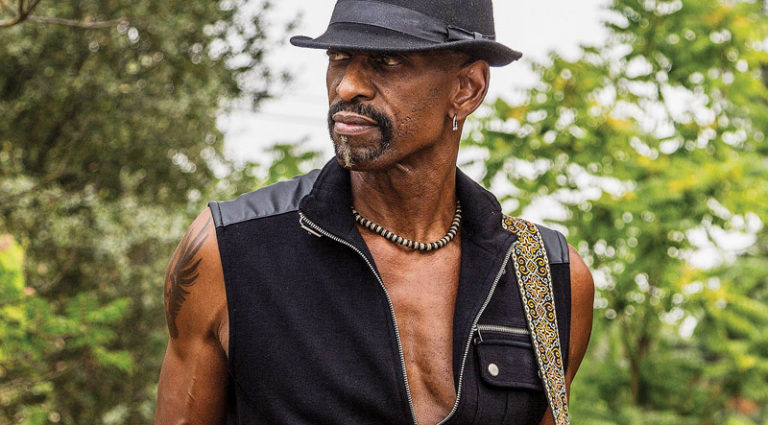 Steeped in the blues, Jones has never been afraid to turn up the heat. His guitar is up-front and personal as he molds his generation’s musical earmarks into a personal statement. At the core of his artistry are the songs, which resonate with fervent craft, thoughtfulness, and gravitas.

Your songwriting gets cooler with each record.

There’s gotta be growth. If there’s no growth, you’re spinning your wheels. I don’t want to keep repeating myself. Being a blues-rock player gives me more flexibility; I could do a blues album if I wanted, but with all the great music I grew up with, it’s hard to do one thing (laughs). It’s all based on the blues, anyway.

“I Hate Hate” is a reggae song with a message.

It’s all about the songs. I have never sat down to write a song and said, “I hope this makes someone happy.” I write songs that I want to hear; I write what makes me happy. If my fans like it, great. If they don’t, that’s okay. It would be easy for a blues artist to play I-IV-V all day and try to win Best Traditional Artist every year. To me, it’s fake. I know it sounds cliché, but I gotsta be me. I do what I do and hope people like it. That’s the best I can do.

“Burn The Plantation Down” is riff city.

That’s the song that I was going to leave off the record. Then I said, “I like this song!” It’s got a rockabilly drum kind of thing. I read this book called Bullwhip Days, which is a memoir from ex-slaves who could read and write but didn’t want to tell anyone, or they’d die. I read all these stories. I thought about writing a song from a slave’s perspective, watching what’s going on, and how he must feel. I wrote all this before the Covid lockdown, but it’s interesting how these songs line up right now.

Did you have different guitar setups for the sessions?

No, I nailed it down. I had my Bogner Shiva EL34 with this great extension cabinet from my Vibro-King, and a blond Fender Super-Sonic head I’ve used for years. They both overdrive, and when you blend them together left and right, it’s just a kick-ass thickness, like a big fat booty walking down the street. For the clean stuff, I used the Bogner and the Fender on its clean channel.

My 2011 Les Paul Standard Gold Top is all over the record. I played more Les Paul than I’ve ever played. I love it. On the day I recorded “I Love The Blues,” Peter Green died. I wanted to get that big clean tone. I have a lot of his stuff and wanted to get what he was doing. I was like, “Let me take his spirit into the studio and put my thing on it.” The producer was like, “Wow! What is that?” I also have a Les Paul Traditional from 2012 and a Surf Green Strat I put together in 2014. This bitch sings.

Do you have a favorite stompbox?

It’s called a G2D Custom Overdrive. They make them in New Zealand. I used it on “Front Door Man.” It has a great sound, but my Bogner has its thing.

How do you approach songwriting?

I can write complicated songs, but this time I wanted to write something that people can sing in the shower, like “Nothin’ On You.” I call it “beautiful simplicity.” That’s why I like artists like Tom Petty. Artists that can write simply but have a real point to get across. Sometimes the music can get in the way of the lyrics. I didn’t want that to happen this time. My bass player, Cornelius Mims, helped me produce the record, and he pushed me in ways I didn’t know I could go. I trusted his ideas.

What else is going on in your world?

I’ve had an acoustic album in the can for years. I’m a country boy, so I want to dedicate it to my hometown, Baltimore.

I have bookings, but you never know what’s going to happen with the way things are going in the world. As soon as the planes let us fly to Europe, I’m going. After that, I’m going on a summer tour in the States. People are starving for music right now. I think the only thing keeping us together is music and sports. I just want to get back out there, share this album, have some fun, do what we do, and make people happy.