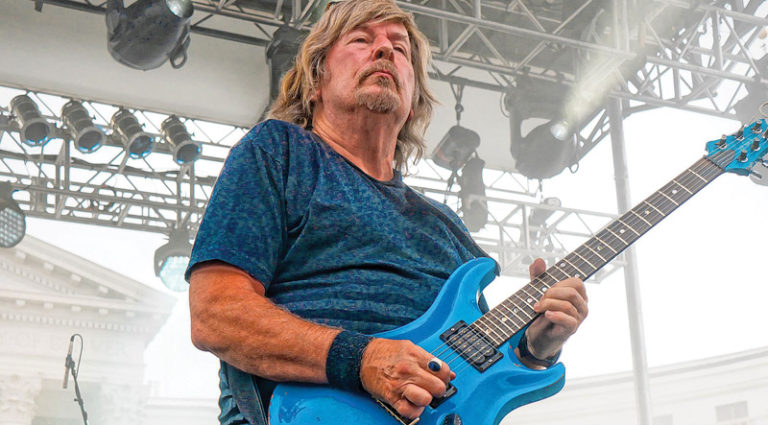 If you listened to pop radio in the late ’70s, it was hard to miss Firefall, whose soft-rock hits were plastered all over AM airwaves, notably “You Are the Woman,” “Just Remember I Love You,” and “Strange Way.”

Firefall is back with Comet, their first album in 25 years. Featuring original lead guitarist Jock Bartley, it offers a slew of catchy tunes.

Few know that Firefall emerged from the Byrds, Flying Burrito Brothers, Zephyr, and Jo Jo Gunne.
True. We made good records with those earlier bands, and knew the ins and outs of the cut-throat music industry. The other thing was that our singer/songwriters, Rick Roberts and Larry Burnett, had 25 new songs on the first day of rehearsal. We had accomplished musicians including bassist Mark Andes, from Spirit, and drummer Michael Clarke. The combination of Mark, Michael, and myself playing Rick and Larry’s songs was essentially the Firefall sound.

Firefall was tagged as a soft, California-style band, but you also wove in jazzy influences.
As a kid in Colorado Springs, I was fortunate to become a student of jazz guitarist Johnny Smith. Not only did he drill me on technique and precision, but he helped me to develop my own melodic sense. I learned from him that playing tastefully as a soloist was not just about what you played – it was also what you didn’t play. Johnny always said soloing and improvisation is like having conversation with your listeners.

Which guitar did you use for the “You Are the Woman” solo?
I played almost all of the songs from our first three records on my sunburst ’58 Les Paul – my baby! I plugged it into a singing Fender Super Reverb with 4×10 speakers. The sustain was amazing with that combo – you can hear that on “It Doesn’t Matter” quite clearly. “Mexico” was a one-take solo and, unbeknownst to me, my hero, Eric Clapton, was watching me play from the control room at Criteria Studios, in Miami.

“Just Remember I Love You” had such an understated solo, but it’s critical to the song.
Thanks! Producer Jim Mason suggested a sax in that solo section, but none of the takes sounded just right, so we tried guitar. Within a few minutes, I came up with a solo that was understated and melodic. Then [flute/sax player], David Muse played the harmony part on saxophone, and voila – there it was! A spontaneous creation that would become a huge hit single.

On the new album, “A Real Fine Day” has that classic Firefall sound.
The great Nashville session guitarist Brent Mason played on the basic track. For the first part, I decided to double his licks with my guitar, so those early licks are the two of us in unison. The runs Brent played on his Telecaster were pretty country-sounding; I took the solo and then we inserted his parts where appropriate. It was a fun experiment and I’m honored to have shared some licks with Brent.

By the ’80s, I knew I couldn’t take my ’58 on the road anymore. I heard about the then-new PRS guitars and loved the new features Paul had invented – locking tuning pegs and the amazing five-position switch that would change from humbucking Les Paul sounds to the glassy, delicate Strat sounds. After I met him, I remember telling him, “I want a really bright blue guitar.” I liked [the color of] the blue Bic pen cap. So, I ordered a 1986 PRS Custom with this unusual color and his “sweet switch.” To this day, I have the only Colorado Blue guitar PRS ever made. Believe me, it absolutely sings.

What other gear do you use?
Firefall travels light and we have the back line amps, drums, and keys provided to us at each gig. I play a Roland Jazz Chorus on the road; they’re very solid and consistent, and have a great clean channel. I use minimal pedals – a Boss Overdrive, digital delay, and tuner.

Some artists have a love/hate relationship with their biggest hits. Do you ever get tired of playing Firefall hits in concert?
Honestly, I know how lucky Firefall is to have huge hits to play. There was a time in the ’80s when Rick was back in the band and didn’t want to have “You Are the Woman” in our set list. But to me, fans buy tickets to hear that song, you know? Not many bands have a hit that has been played seven million times on American radio! To see the whole crowd sing along is heart-warming and reaffirms the role music plays in people’s lives. I’m also excited that, 45 years later, Firefall is still putting out new music.