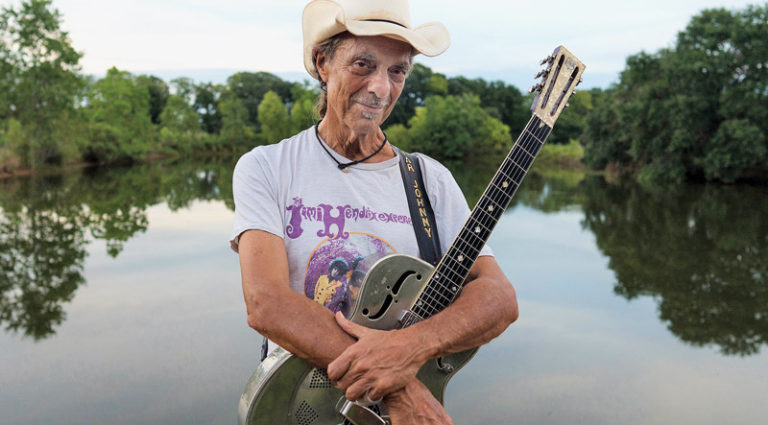 Johnny Nicholas has been playing “roots music” since long before the term existed. A childhood friend of Duke Robillard, he has jammed with his blues heroes in Chicago, and for several years played guitar in Asleep at the Wheel.

His latest album, Mistaken Identity, was recorded and produced by Valcour Records co-founder Joel Savoy in Eunice, Louisiana. That region is important to Nicholas, who played there as his career was germinating.

“Attitude-wise, it just made me really comfortable to be back in the area where everything came together for me as a young man and musician,” he said. “All the music I love is a part of daily life in southwest Louisiana, even more so than Texas. It’s working-man’s music – the stuff everyday people relate to and unwind to at dance halls and clubs, at house parties, and around campfires.”

Mistaken Identity contains diverse tunes, all penned by Nicholas except for the closer, “River Runs Deep,” by his late friend Stephen Bruton.

Nicholas and guitar cohort Scrappy Jud Newcomb brought a diverse assortment of classic instruments to the keep-it-simple sessions; Johnny’s arsenal included a rare mid-’30s National Don resonator, a ’49 Gibson J-50, an 1895 Washburn parlor guitar, a ’64 Intermark/Cypher guitar (“…with more switches than a freight yard,” he said), a ’64 Gibson ES-330, a 1915 Gibson mandocello, and a 1917 The Gibson guitar-banjo.

Amplification stayed minimal. Nicholas played through a ’65 Fender Deluxe Reverb and an early-’60s Magnatone amp with a 12″ speaker in tandem, while Newcomb ran through a Tone King Mk I.

The result is a confident, well-crafted presentation that doesn’t rely on raucous guitar licks. The bluesy opener, “She Stole My Mojo,” features Nicholas on the National Don in open-G tuning. “Mule and the Devil” kicks off with the Gibson guitar-banjo.

“I have gratefully and happily become the caretaker of this amazing instrument, which still has the original calfskin head!” Nicholas enthused.
On the title track, Nicholas asked Newcomb to borrow a Johnny “Guitar” Watson trick, employing a meow-like slide lick to cover a potentially-offensive word.

“I spent some time in east Oakland in the early ‘70s and I went to see Johnny perform every chance I got,” Nicholas chuckled. “He was the master of the talking guitar. I asked Scrappy to inject that bit of guitar humor into the song, and he nailed it.”

The narrative of “Guadalupe’s Prayer” had a backstory, and Nicholas averred the song is “…a vision of hope for the oppressed, mirrored in the struggles of the peasants and the Mexican Revolution. Our Lady Guadalupe has always been seen as the patron saint of Mexican patriotism and the common man. This is pure allegory, where the meaning is not so well-hidden, and not intended to be.”

Nicholas also exhibits decent gospel-influenced piano chops on the album, developed on the road as a backing musician in his 20s.

“In all of my travels after that experience, whenever possible, I would find my way to the black neighborhoods on Sunday mornings, to the churches and their choirs and congregations,” he said. “It was very different, stylistically, from my Greek Orthodox upbringing, but very similar in many spiritual ways. It made me feel good and it all dovetailed with the blues and early R&B I dug growing up – Ray Charles, Little Richard, Lloyd Price, Sam Cooke, Howlin’ Wolf.”

While he’s quite pleased with Mistaken Identity, Nicholas isn’t slowing down, even as a septuagenarian.

“I enjoy performing more than ever, and a lot of this has to do with overcoming my habitual stage fright and focusing on selling my songs to the audience,” he said. “I like to think my writing is getting better, but I increasingly find myself not in control of my songs. They come to me and I document them in their infancy. The hard part is crafting and finishing them – getting the most bang for your buck through the images and metaphors that convey and sell the story. This part I am in control of, and it is gratifying, though it’s sometimes like pulling teeth. Some come easier than others, but that’s always been the case for me.”