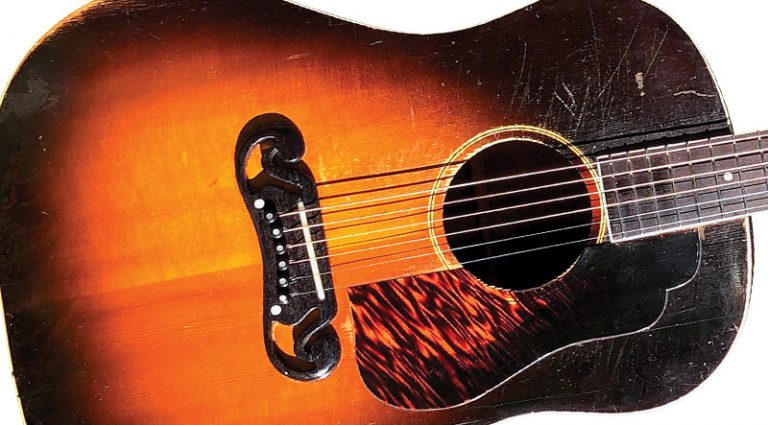 I’ve worked on plenty of old Gibsons, but guitars like this 1939 J-55 are rare. It’s only the second one I’ve ever seen, and first I’ve worked on. It was brought to the shop for a neck reset, bridge removal/re-glue, and new frets, nut, saddle, and new tuners. After the difficult repairs were done, I looked forward to the simpler task of installing the tuners. That’s not the way it went, however. 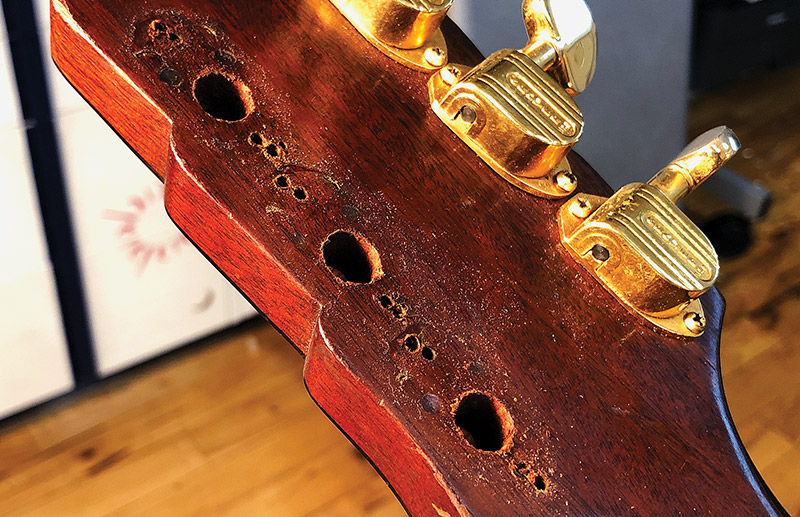 1) Turns out there have been several sets of tuners on this guitar, as revealed by the 20-plus holes I found, none in the right spot for the new Waverly screws. Also, the original post holes would have been 1/4″ but those for the Grovers that were on it were 3/8″, and looked like they’d been carved with a rat-tail file. My first task was to plug and downsize the holes. 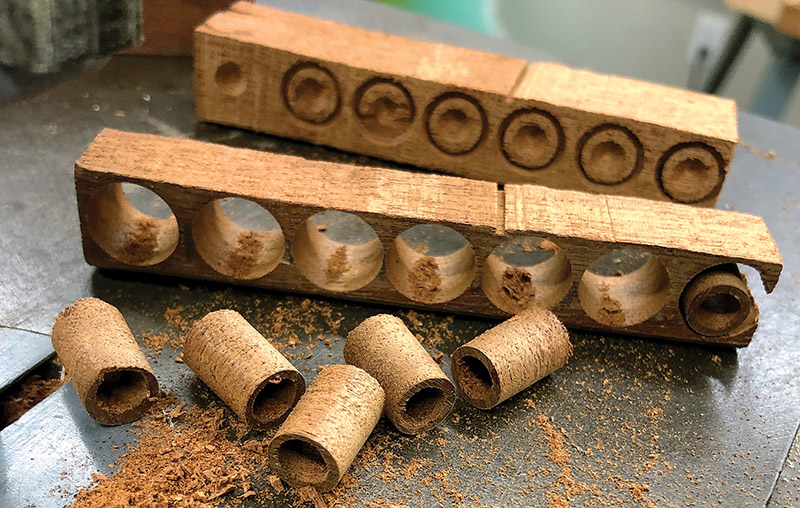 2) I clamped a block of mahogany into my drill press table, then used a 3/8″ plug cutter to drill six holes. I didn’t go all the way through. I then drilled 1/4″ holes down the center of the plugs before cutting them free with a band saw, yielding six mahogany tubes or “sleeves.” Once wetted with glue, the sidewalls of the holes bonded well with the plugs. 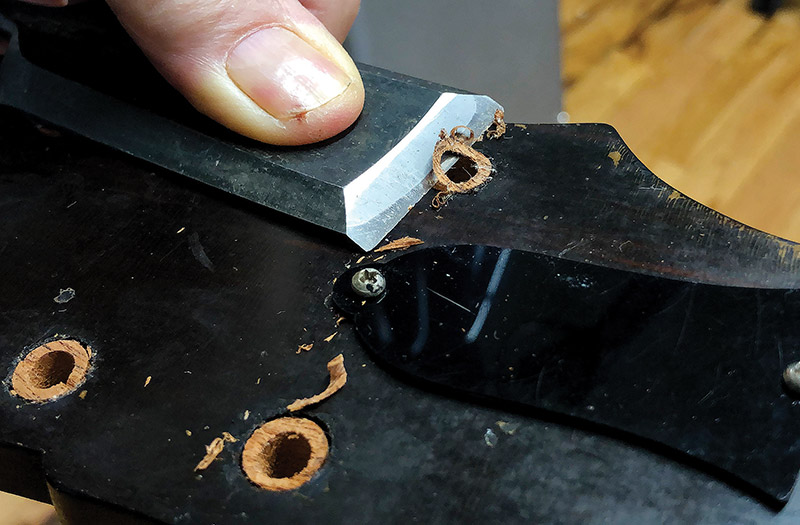 3) I used a sharp chisel to carefully shave down any plug that was peeking above the surface of the front or back of the peghead. 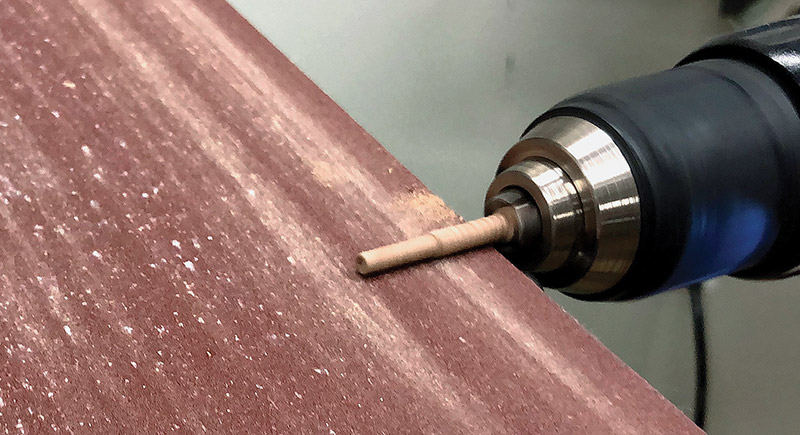 4) I shaved walnut furniture dowels by chucking them in an electric hand drill running in the reverse direction of the belt sander. 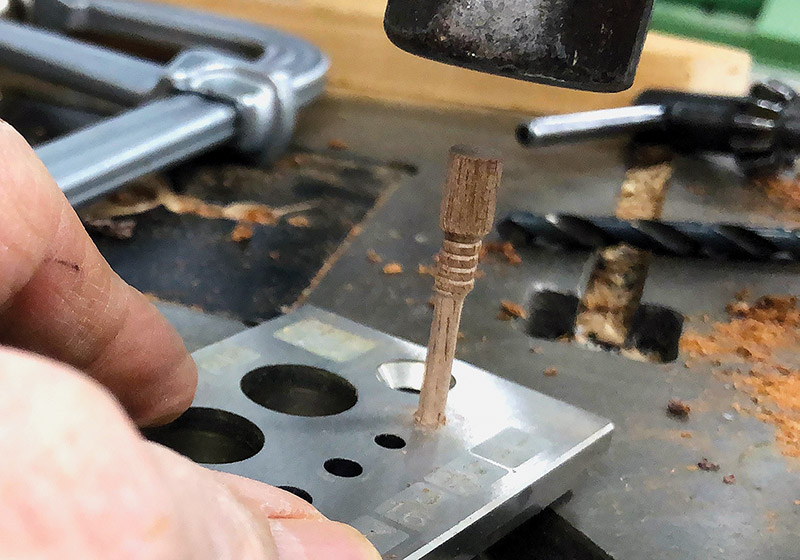 5) I then hammered the small end of each dowel through a hole plate, which is a hardened steel tool drilled with common dowel sizes and sharpened on the edges of each hole. It shaves the wood as you hammer the dowel through. I shaved and cut enough to make at 24 plugs. 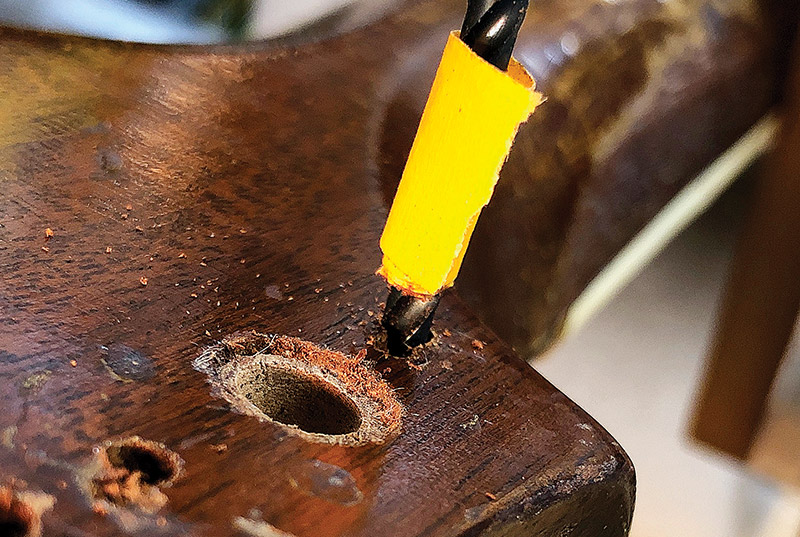 6) Using tape as a depth guide, I drilled 12 of the unwanted holes and filled them with glue. I did this in two phases because the holes were so close together, and the only way they wouldn’t break into each other was to drill, fill, and trim one set of plugs, then do the rest. 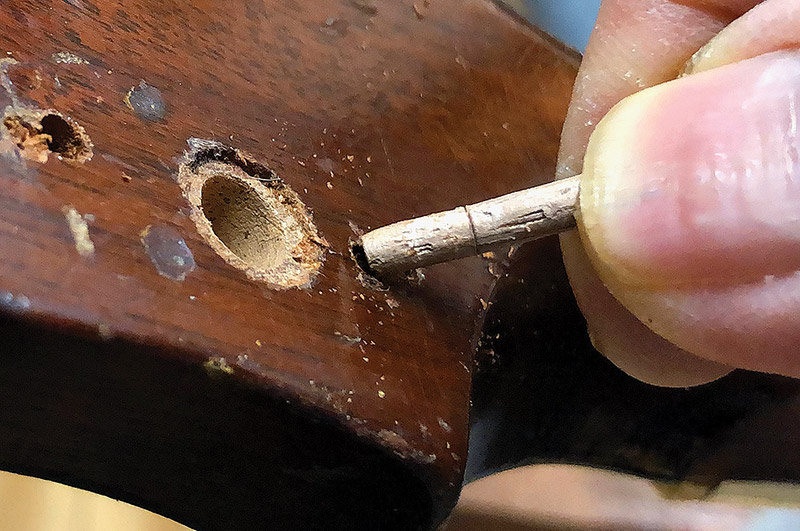 7) Each plug had to be about 3/8″ deep, and each dowel yielded two or three plugs. I pre-cut the plugs to length with a #11 exacto knife blade by placing the dowel flat on the edge of the bench and pressing the blade against it enough to push the dowel, then rolled it back and forth. The knife cut a clean circle as the dowel rolled, but I didn’t go all the way through. 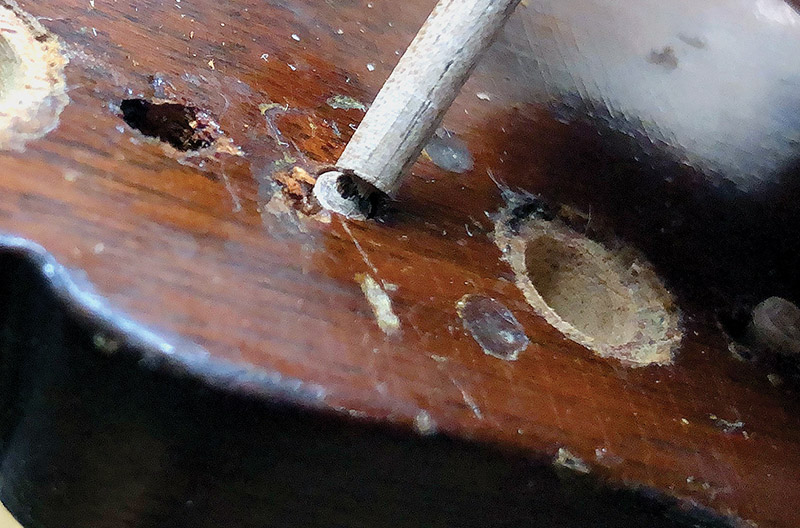 8) I then put glue in the hole, shoved or tapped the dowel flush, and broke the plug at the cut line, leaving a clean, flat-surfaced plug. 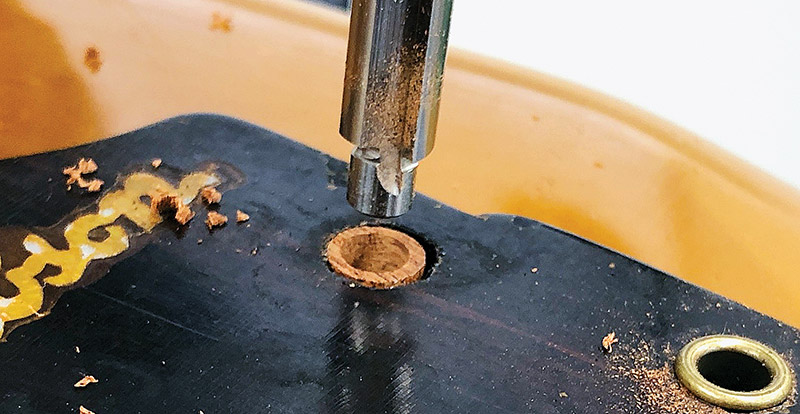 9) The shank of the press-in Waverly bushings requires a hole about .339″ in diameter and about 3/8″ deep (not all the way through the 1/4″ holes drilled earlier). These holes are drilled on center to the 1/4″ post holes. I used Stew-Mac’s peghead bushing reamer, which creates holes to the proper specs. 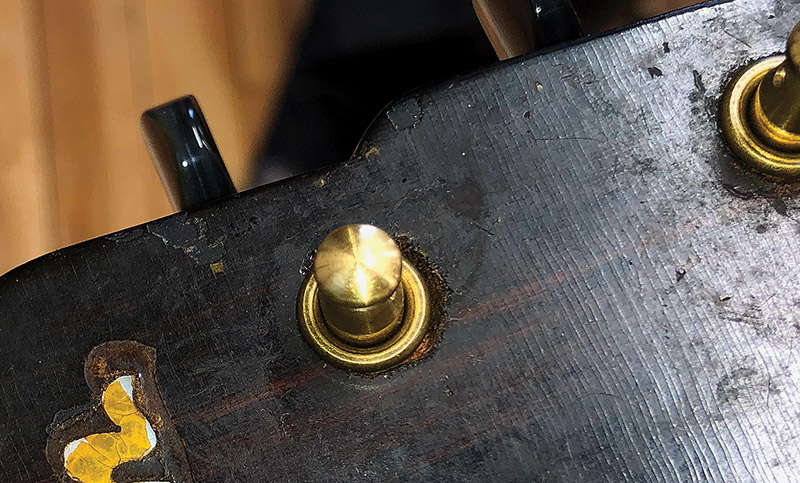 10) For some reason the G-string hole had been drilled even larger than 3/8″ (about .4″), and with the bushing in place, I could see a “smile” of missing wood showing. It bugged me. 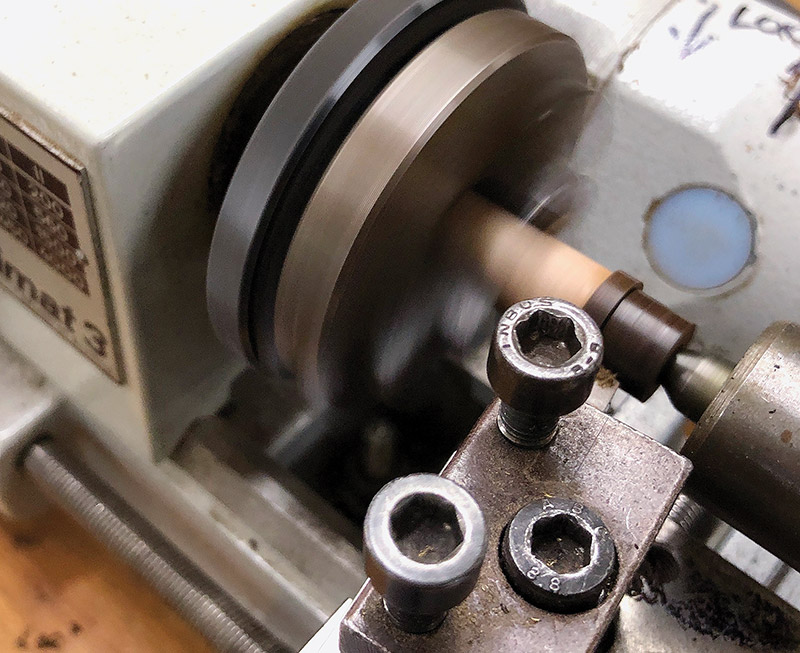 11) Again, I used a plug cutter – 1/2″ this time – and cut a solid plug all the way through a 1/2″-thick piece of Brazilian rosewood that matched the peghead overlay in grain orientation and color. I glued the rosewood plug to a 1/2″ wood dowel and let it dry. Once dry, I chucked the dowel into the lathe and turned its diameter down to .4″, to match the holes in the peghead. 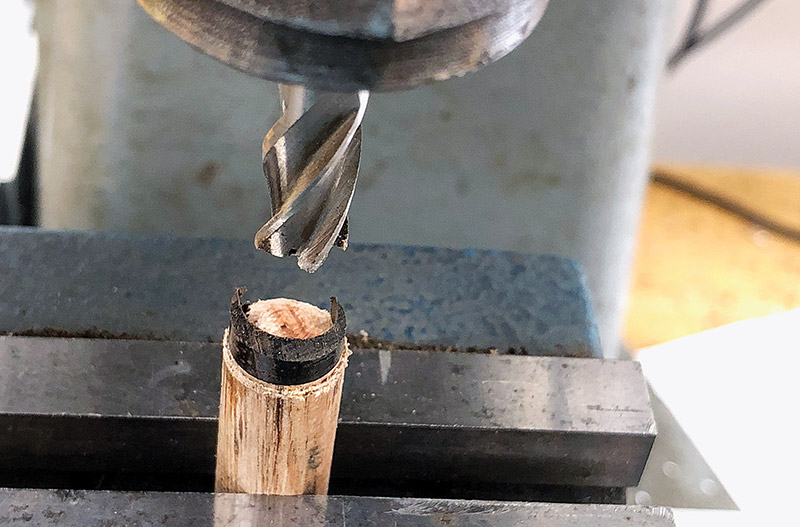 12) I clamped the dowel (with the glued-on rosewood plug facing upward) into my milling-machine vise and cranked the vise off-center. This let me nip a little at a time with a face-cutting end mill, to avoid having it splinter. I ended up with a crescent-shaped “smile” that was thick enough to slice through the cross-section into two smiles. And, it turned out I needed two – one for the G string and one for the low E. 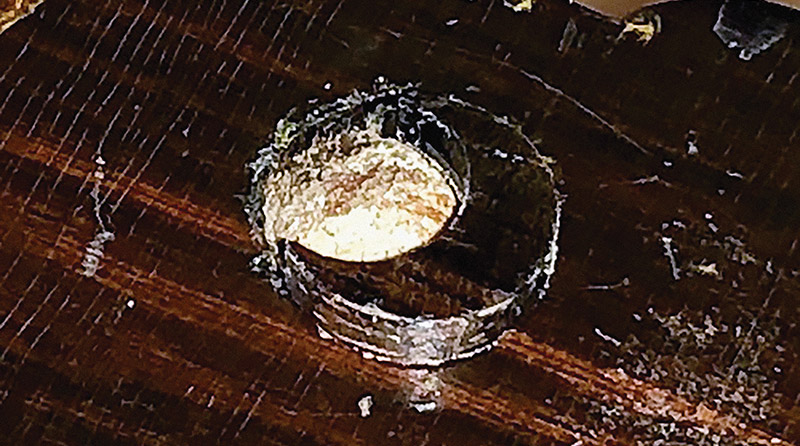 13) See the orange streak running through the piece? Once inlaid, it will still be visible because I won’t spray finish over the repair, but it’s a special touch. 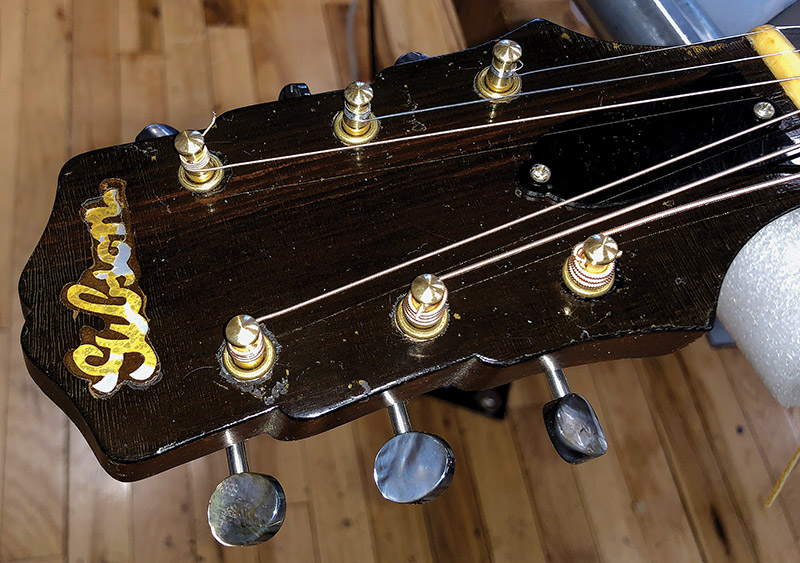 14) After I glued the smiles into the peghead overlay and touched them up with clear shellac, they were hardly noticeable. I felt good about taking the time to do it.