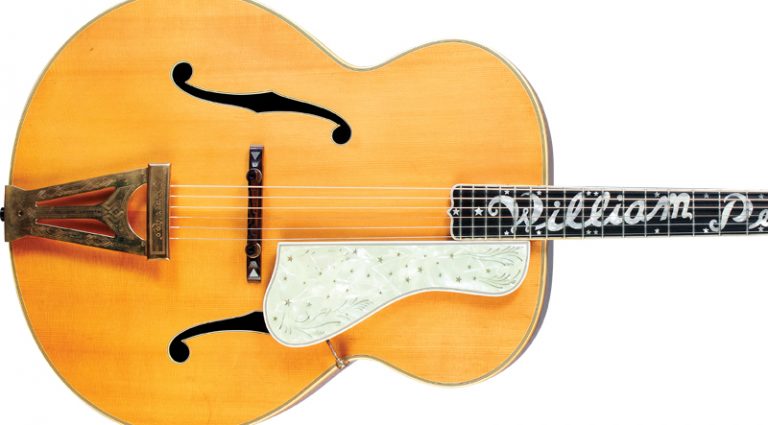 The iconic “singing cowboy” was created by Hollywood actors like Gene Autry, Roy Rogers, Tex Ritter, and others. Many used fancy, customized guitars, often with their name emblazoned on the fingerboard, and the majority were high-end flat-tops including Martin D-45s and Gibson J-200s.

This 1940 Gibson Super 400N was made for a genuine Texas cowboy and larger-than-life character named William Fulton Peale, Jr.

Born in San Antonio on January 5, 1922, he was first cousin to Norman Vincent Peale, author of The Power of Positive Thinking. His father was successful in the oil business in Texas and left his son financially secure.

As a young man, Peale was a competitive pistol shooter, and at age 40 transitioned to skeet shooting. He adopted an unorthodox stance, holding both elbows straight out from his sides, but still managed to qualify for several Sports Afield All-America teams in the late ’60s. He went on to an effective career in skeet shooting and in ’91 was inducted to the National Skeet Shooting Association Hall of Fame. Contemporaries remembered him as a great storyteller, especially when he reminisced about his early years in competitive shooting.

Peale also enjoyed playing guitar. In early 1940, he ordered a blond Gibson Super 400N from the factory, and serial number 96242 was shipped to him from Kalamazoo on August 20. While the guitar is a beautiful example, Peale decided it needed something extra, so not long after purchasing the guitar, he returned it to Gibson, where it was customized with his name rendered in mother-of-pearl script inlay on the fingerboard, and small stars on the fretboard and its engraved white pickguard. Gibson returned it on February 17, 1941 – a quick turnaround (only six months) for such customization.

In the years immediately before World War II, many instrument builders did not cut or inlay their own mother-of-pearl, even on production models. Instead, they depended on a network of companies that specialized in this work, most of which were in New York City.

From 1903 through 1929, Aumann Brothers, of Detroit, produced inlays for everything Gibson manufactured. Gibson would send blank (with fret slots) fretboards to Aumann. The brothers used manually powered stand-up jigsaws to cut intricate patterns from thin sheets of mother of pearl, typically creating seven or eight patterns simultaneously by stacking layers. The pearl was inlaid by tracing patterns on the fingerboard and drilling a small starter hole through the fingerboard, then cutting the rest using a jeweler’s saw. This method had the advantage of speed, but often resulted in a sloppy finished product that showed obvious filler around the edges of the inlay. Because wood had been removed, they had to support the pearl with filler underneath, as well.

The fingerboards were returned to Gibson to be fretted, then stored as a sub-assembly.

In 1930, Gibson began using Union Pearl Works, of Brooklyn, for primary production instruments, but until 1950 continued to use Aumann Brothers for custom orders. In a 2009 interview for Spann’s Guide to Gibson 1902-1941, Carl J. Stadler, nephew of Frank and Joe Aumann, recounted working in the shop during the late ’30s and early ’40s, including how it received a stream of special orders from Gibson. 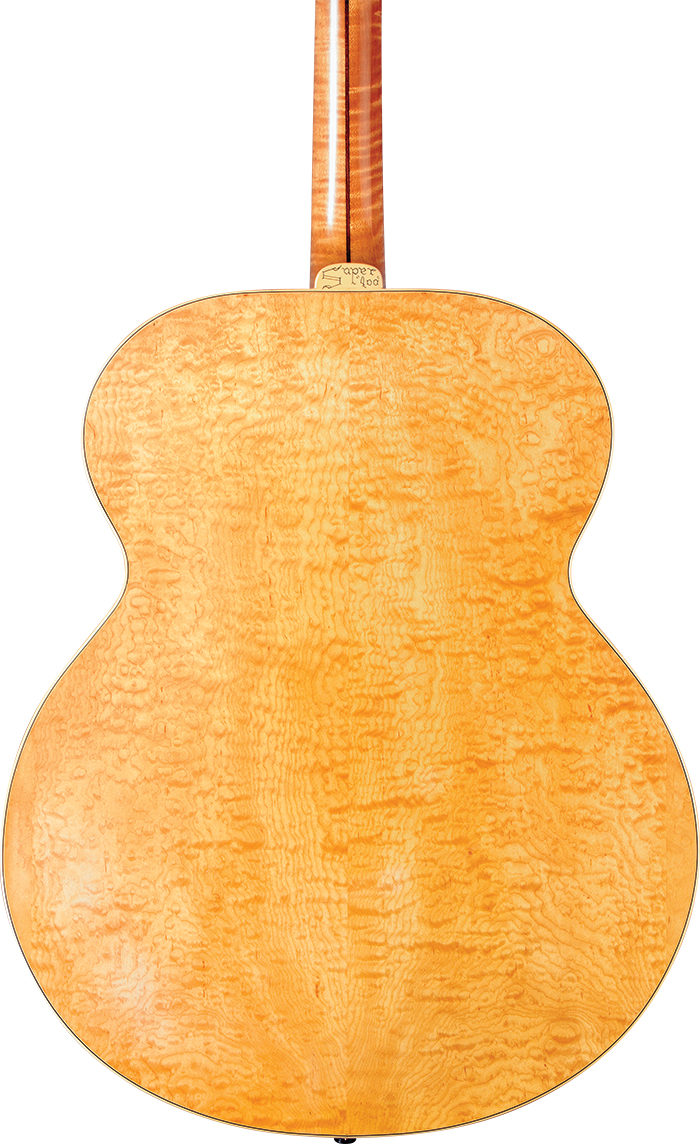 It’s also interesting that if a specific model was discontinued, Gibson did not discard the completed fingerboards (or other parts) intended for it. A good example is the L-Century flat-top produced from 1933 until ’39, which had a white-celluloid fingerboard with inlaid rosewood inserts which in turn had inlaid mother-of-pearl patterns. The rosewood inserts were produced by cutting up leftover tenor-banjo fingerboards, which in turn produced a variety of inlay pattern deviations from the L-Century’s catalog spec.

Gibson found other uses for leftover fingerboards. When instruments requiring fret work were returned to the factory, it was easier to simply replace it using the discontinued stock; the replacement already had new frets, so it was a matter of dressing them and (if called for) re-binding. This practice resulted in bizarre combinations of inlay patterns.

Peale married late in life, never had children, and lived most of his life in Austin before dying there on January 15, 2008.