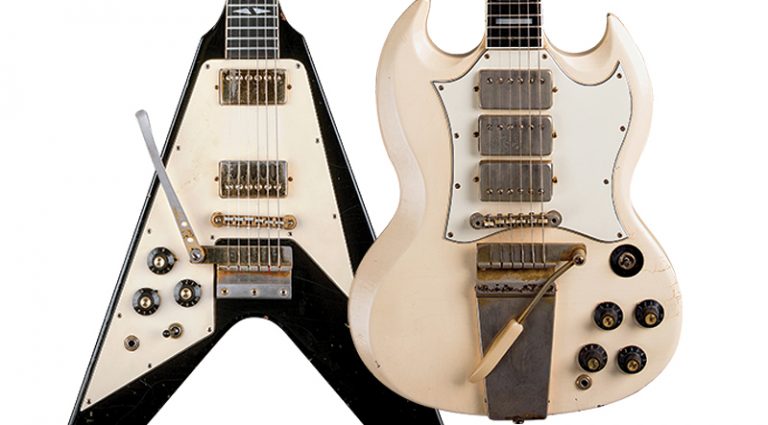 No two ways about it, as his career hit stride, Jimi Hendrix was a Strat guy. Not famously loyal to any particular guitar going back to his days hustling chitlin-circuit gigs with Slim Harpo and Tommy Tucker, from the moment he could upgrade from the Supro Ozark and Danelectro of his youth to the Epiphone Wilshire he bought fresh out of the Army in 1962, the Fender Duo-Sonic used to back the Isley Brothers, to the Jazzmaster and Jaguar with Little Richard, Jimi always wanted the tool that best helped him channel the sounds in his head.

As he moved to center stage with his own Experience band in 1966, that tool was a Strat – and several that he used are now famous unto themselves, including the white one he played at Woodstock, the sunburst models he set aflame in the heat of performance, and the black ’68 with maple fretboard that was purportedly his favorite guitar and which he played the night of his death in September of 1970.

Today, several of those Strats are in the noted collection of the Hard Rock Cafe – as are two Gibsons that are equally identifiable for their use at specific concerts.

The Flying V bearing serial number 849476 was commissioned by Hendrix in 1969 and shipped from the Kalamazoo factory in 1970. He played it during his appearance at the Isle of Wight Festival in August of 1970, as well in the controversial 1971 film Rainbow Bridge, shot July 30 on Maui. The film includes 17 minutes of Hendrix with it, and while the footage is heavily edited it’s coveted by Jimi fans. 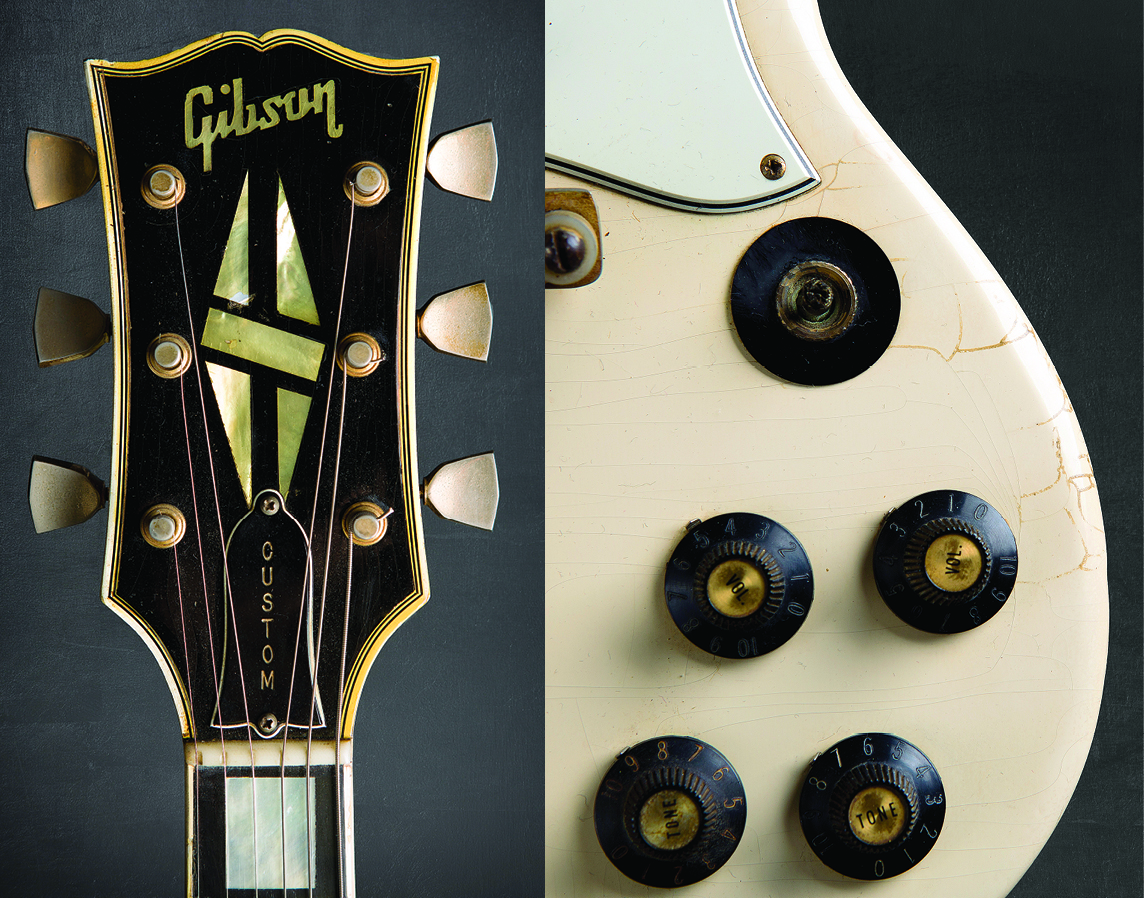 Jeff Nolan, Hard Rock’s resident curator/historian, says most of this guitar’s cosmetic appointments were created per Hendrix specifications. It sports split-diamond inlays, a bound neck – both unusual for a Flying V from that period – a truss-rod cover from a Les Paul, and an ultra-thin three-ply pickguard. It also has a Maestro vibrato with a flat-mount base/string anchor bit, and lever with three holes that allowed for longitudinal adjustment. Word has it that it was on this instrument that the company first displayed a pearl-inlay Gibson logo on a V, was positioned unusually high on the headstock.

Jimi owned three Flying Vs – a black ’67 he painted with “psychedelic” shapes and figures and used at the Paris concert during a 1967/’68 tour, as well as a ’69 in tobacco sunburst he played while awaiting delivery of this custom lefty.

Jimi used this white ’67 SG Custom in 1968/’69, and is best known as the guitar he played for his appearance on the “The Dick Cavett Show” in September of ’69. After sitting for a bit of discussion with the host, Hendrix performed “Izabella” and debuted “Machine Gun.”  The guitar has the Custom’s typical three humbucking pickups and was the instrument he frequently chose to perform “Red House,” including a 12-minute version in Stockholm on January 9, 1969. On the historic Isle of White version of the song from August of 1970, however, he played the custom Flying V. Many regard that ferocious performance as one of the finest examples of electric blues. Barely three weeks later, Jimi was gone. 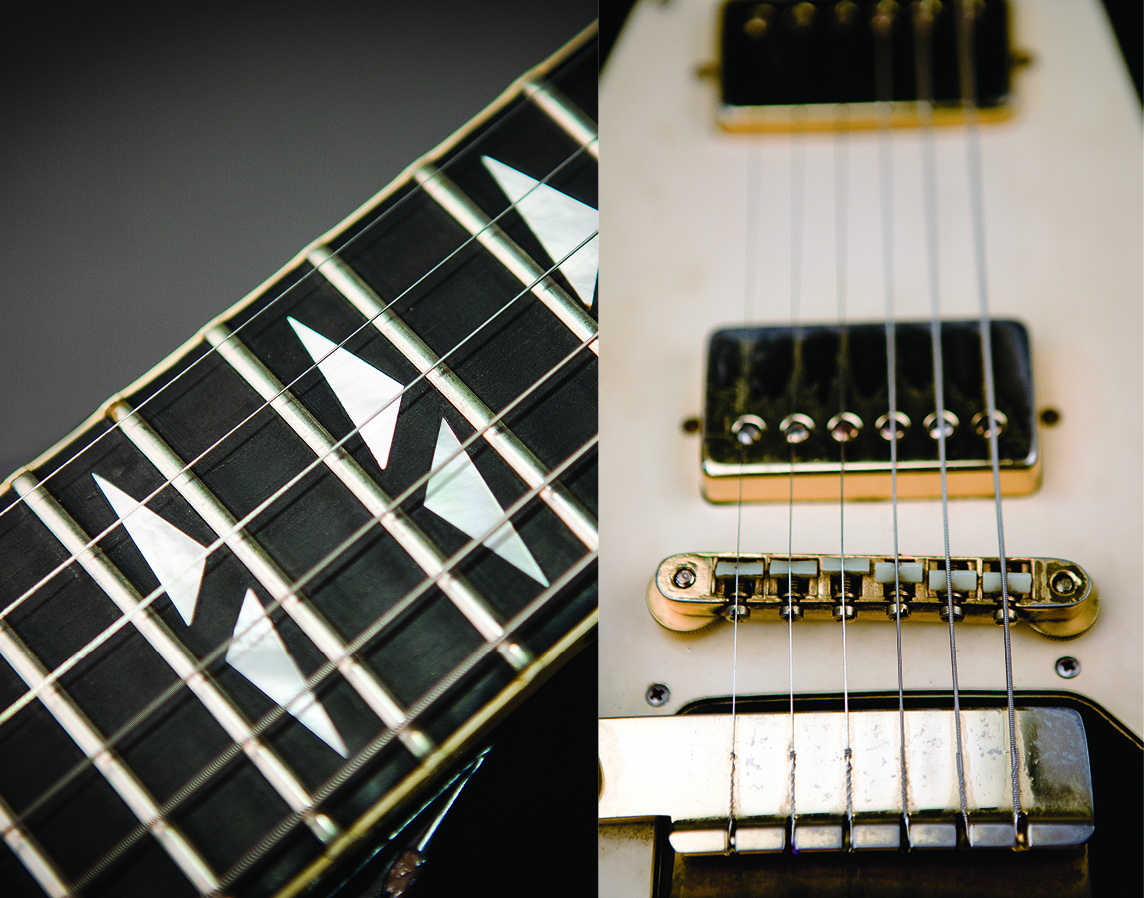 Fender Custom Colors in the 1960s