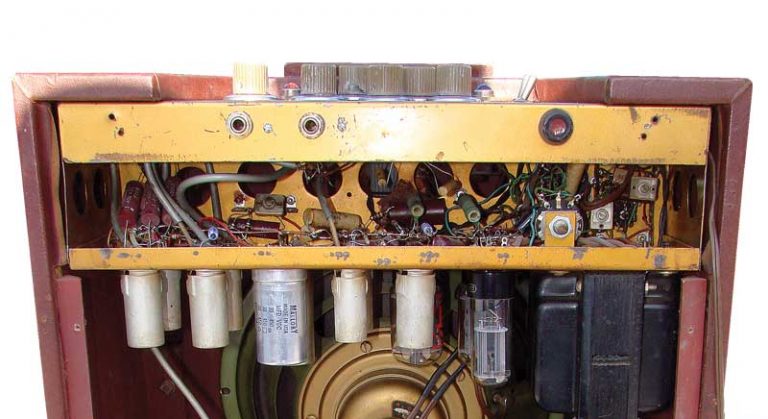 If you want to talk star-user ratio, the Ray Butts EchoSonic is near the top of the heap. Most accounts agree that fewer than 70 amps were ever made, yet owners among that modest number include Chet Atkins, Luther Perkins, Roy Orbison, Paul Yandell, Carl Perkins, and, the most celebrated in EchoSonic lore, Elvis Presley guitarist Scotty Moore. In short, in the mid ’50s, Butts’ baby made the sound of rock and roll – which has remained the sound of rockabilly, in particular, ever since – and at the dawn of this new musical genre, anyone who wanted to achieve it went to Ray Butts to get it.

The EchoSonic shown here, serial number 24, was originally sold to Paul Yandell, who played with the Louvin Brothers, Chet Atkins, Kitty Wells, and Jerry Reed. Scotty Moore bought it in the late ’80s or early ’90s as a backup for his original EchoSonic, and sold it only recently to guitarist Deke Dickerson, who still owns and uses it today. An illustrious history for one small, brown combo, but the EchoSonic’s lineage takes us even deeper into the beating heart of rock and roll.
Even before the first EchoSonic was born on Butts’ workbench, slapback echo was a key element of the rock-and-roll sound – and the early-’50s guitar sound in general – but prior to the creation of this amp, the sound was produced as a studio effect, one not easily transported to the performance stage. Butts, who owned a music store and repair shop in Cairo, Illinois, built the first EchoSonic for a local named Bill Gwaltney, who wanted to replicate Les Paul’s slapback sound in live performance. Using a 15-watt Gibson amp based around a pair of 6V6 output tubes, Butts labored over various means of achieving built-in echo, finally abandoning a noisy wire recorder for a tape-loop design. Gwaltney’s amp was completed, and successfully used, by ’53, and Butts had an inkling he was on to something. He built a second EchoSonic, packed it in the car, and headed to Nashville, where he hoped to audition it for the premier name in electric guitar at that time. As Butts told VG in 1994, he simply looked up Chet Atkins in the phone book and gave him a call.
“He answered the phone and I told him what I had,” Butts said. “He seemed kind of interested and told me he would be rehearsing for the Opry at the radio station and, if I wanted, I could bring the amp there and he’d try it out. I did. A bunch of them gathered around; they’d never heard anything like this before.” Pretty soon, however, they, and others, were hearing it plenty.

Atkins used the amp at the Grand Ole Opry the very next night, decided to buy it, and Butts sold it to him that day for his newly established list price of $495, minus $100 for a Fender combo Atkins gave him on trade. This was a hefty price at the time, given that the new Fender Twin sold for $239. But then, EchoSonics carried the desirable built-in echo and were made by hand. Atkins began using the amp straight away, employing the echo on several prominent recordings – his famous rendition of “Mister Sandman” among them – and the hip new cat in town was swiftly crawling out of the bag. As reported on his website, Moore heard an Atkins instrumental on the radio and chased down the source in order to achieve onstage the slapback Sam Phillips had been giving his guitar in the studio. He ordered his own EchoSonic in early ’55, and took delivery in May. In July, this most famous of EchoSonics hit the studio with Moore, Elvis and company, where it was used on the groundbreaking recording of “Mystery Train,” among others.

The EchoSonic continued to be used on every recording Moore made with Presley up to, and including, the legendary 1968 “Comeback Special” on NBC TV (originally entitled “Elvis, Starring Elvis Presley”), where it can be heard, and occasionally seen, behind Moore’s right leg during the seated/in-the-round performances. 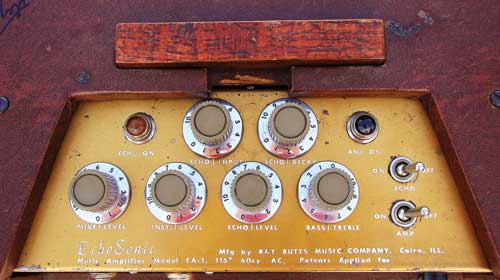 Like some tube-fired chain reaction worthy of the Old Testament, Moore’s purchase and use of this EchoSonic – serial number 8 (though often reported as being the third one built) – continued to send waves of desire for the new sound rippling through the Nashville scene. Chet’s playing begat Scotty’s desire, Scotty’s playing begat Luther’s desire, and Carl’s desire, and Roy’s desire… In time, Butts’ work naturally begat a little desire on the part of the industry, too, and the design of the tape-echo unit mounted in the bottom of the combo cab was eventually adapted for use in the short-lived Rickenbacker Ek-O-Sound amp, and the far-longer-lived Maestro Echoplex. Another Butts design also brought Gretsch a humbucking pickup, the Filter’Tron, that nearly beat out Gibson at the patent office, developed after Chet Atkins’ request for a pickup that produced less bass than the DeArmond Model 200, while also canceling hum. 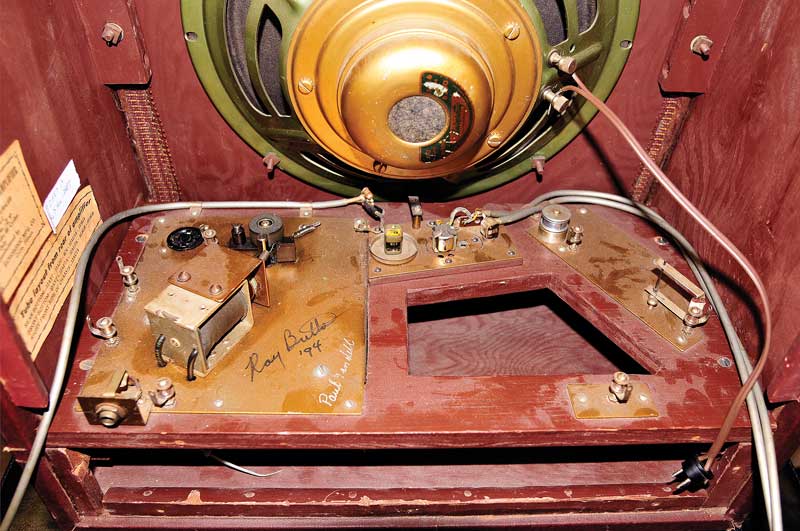 As reported by Deke Dickerson, the current owner of number 24, these amps aren’t short of quirks. The delay time of the slapback echo is fixed, and is longer than the current concept of “rockabilly slapback” (and longer still when you first switch on the amp, until its capstan motor has warmed up for five to 10 minutes), but, says Dickerson, “That is the EchoSonic sound.” As for the amplifier itself, it is also something of a one-trick pony, and doesn’t have much punch even for a 25-watter (by the time of Moore’s first amp Butts had changed from 6V6s to 6L6s), but that too is part of the mystique. “These amps have a magic sound,” Dickerson declares. “They are not very loud, and they break up really easily, and it really only does one thing with the non-adjustable echo. In that regard, it’s not a very versatile amp at all. But the one thing that it does has not been captured by any other amplifier before or since. Nothing has that sound but an EchoSonic! The amp still works great today and has that awesome ‘Scotty Moore sound’.” 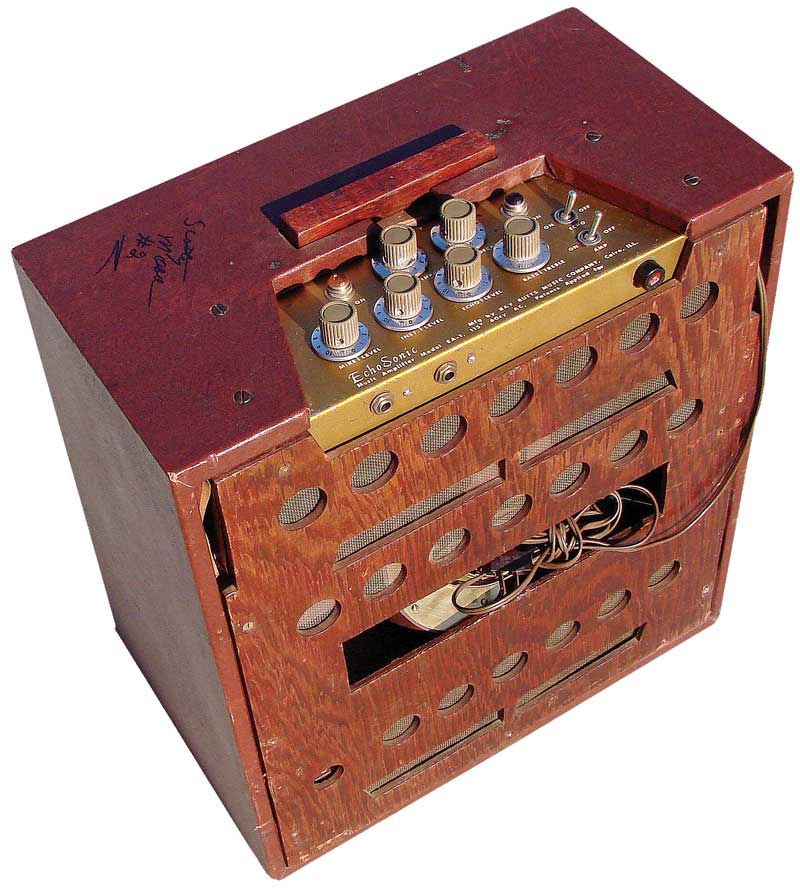 Ideally sized for the recording studio, the EchoSonic was woefully small for live use – its raison d’etre – even by the time rock and roll graduated from sock hop to theater stage. To that end, even before Fender designed the whopping “high-powered” Twin of ’58, and long, long before Vox and Marshall upped the ante on the AC100 and Super Lead, respectively, to help The Beatles and The Who and other Brits overcome similar difficulties, Butts created a pair of powered 50-watt “satellite” cabs to enable Moore’s lithe rockabilly riffs to be heard on a stage in front of thousands of screaming Elvis fans. Otherwise, this 25-watt combo with a single 12″ speaker and its built-in echo is a quaint reminder of a time when rebellion – and groundbreaking tone – came packed in a cabinet the size of a traveling salesman’s battered suitcase.