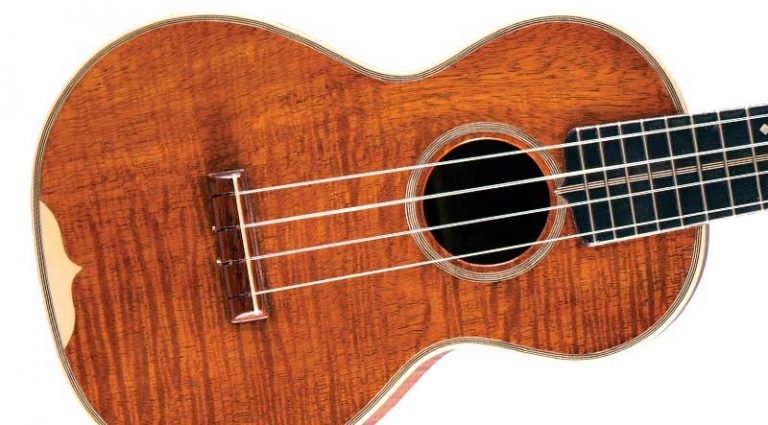 The continuing appeal of Hawaiian music through the past 100 years is based in part on the music itself, which evokes exotic images of life on a Pacific island, and in part on the fact that all you really need to get to that state of mind is a ukulele. As perhaps the easiest of all fretted instruments to learn to play, the ukulele is often seen as a toy, but many musicians and instrument makers took the uke seriously. The most serious of all – in terms of quality of instruments – was the C.F. Martin company, and one of the rarest of all Martin models is this Style 3K concert-size uke.

Though the early 20th century is usually noted as the being the mandolin’s heyday, it was also the time that Hawaiian music was first becoming popular on the mainland. The most distinctive sound in their music may have been the steel guitar, but the uke was equally important as a uniquely Hawaiian instrument and, eventually, as an icon for Hawaiian music.

As chronicled by George S. Kahahele in Hawaiian Music and Musicians, ukes were developed in the 1880s from a small Portuguese instrument called the braguinha, which had four strings tuned in fifths. Coincidentally, in the same way that the beginning of the mandolin era can be pinpointed to the arrival in New York of a performing group known as The Spanish Students, the beginning of the ukulele can be pinpointed to 1879, when a group of Portuguese immigrants (from Madeira island) landed in Hawaii. They brought braguinhas with them, and three – Manuel Nunes, Jose do Espirito Santo, and Augusto Dias – became the first ukulele makers.

The word “ukulele” is most often translated as “jumping flea,” a possible reference to Edward Purvis, a small, nimble braguinha player who was nicknamed “Ukulele.” Another inspiration for the “jumping flea” reference was the movement of the player’s hand. Queen Lili’uokalani, Hawaii’s last monarch and a uke player herself, promoted a more-poetic origin; “uku,” in addition to being a flea, is a gift, a reward, or a payment, while “lele” is used for a range of movements, so the Queen maintained that the “ukulele” meant a gift that was brought to Hawaii.

The appearance of Hawaiian groups at the Panama-Pacific International Exposition, held in San Francisco in 1915, is usually cited as the event that started the craze for Hawaiian music, but its popularity had been growing for at least 20 years. Queen Lili’uokalani had her song, “Aloha Oe,” published on the mainland in 1895; Victor issued its first records of Hawaiian artists in 1905, and a stage show featuring Hawaiian music ran on Broadway in 1912. The Pan-Pacific was the springboard that boosted Hawaiian music into the mainstream of American popular music. Proof lies in the fact that the venerable, conservative C.F. Martin company, in Nazareth, Pennsylvania, rushed ukuleles into production by January of 1916.

Frank Henry Martin, grandson of the founder, was undoubtedly happy to see a rising market for ukuleles. As a guitar maker since 1833, the company had never experienced an instrument market where its main product was the most popular fretted instrument. Martin had responded to the mandolin craze as early as 1898 but had never brought serious competition to Gibson in the early 1900s. In 1915, the cutting rhythm tone of the tenor banjo was ready to push the mandolin aside on its way to dominating the “jazz” music of the ’20s. The sudden popularity of a small, wood-bodied, guitar-like instrument was like a gift brought to Martin – the very definition of the ukulele name.

Frank Henry Martin was no stranger to the uke. As noted by Richard Johnston and Dick Boak in Martin Guitars: A History, he had built some ukes in 1907, but saw no market, and its construction – with a braced spruce top – was too heavy. In 1916, he gave them another try, copying the lightweight design of Hawaiian-made ukes. Instead of delaying production to wait for a supply of native-Hawaiian koa wood, Martin used mahogany, which the company was already using for the back and sides of its low-end Style 17 guitars (Style 18 models would switch from rosewood to mahogany a year later).

Martin started with three all-mahogany models, called simply Style 1, Style 2, and Style 3. They featured progressively fancier ornamentation; Style 1 had an outer binding layer of rosewood, Style 2 had ivoroid (ivory-grained celluloid), and Style 3 was given seven-ply binding around its top plus an inlaid ornament of bone (or celluloid) on the body and headstock. The fingerboard of the Style 3 also stood apart from the small dot inlays of the 1 and 2, featuring paired-diamond inlays at frets 5, 7, and 9, plus three pinstripe lines down the center of the fingerboard.

Martin began making koa guitars to fill special orders from Southern California Music and introduced the koa 0-28K under its own brand in 1917. Oddly, it would be three more years before Martin introduced the 1K, 2K, and 3K, which were the same design, but had bodies and necks made of koa. Despite the more expensive and more authentically Hawaiian look of koa, it was actually less expensive than mahogany, and the prices reflected it; $14, $18, and $30 for the mahogany 1, 2, and 3, respectively, compared to $14, $17 and $27 for the koa equivalents.

These were not cheap instruments. For less money than a style 3K, a musician could buy Martins all-mahogany 0-17 or 00-17 guitar models, priced at $20 and $25, respectively.
The ’20s are most often referred to as the Jazz Age, a period dominated by Dixieland bands, with their tenor banjos. But Hawaiian music was evolving, as well. In mainstream culture, the image of youth was a collegiate man in a raccoon coat, strumming a ukulele – not a trumpet or a banjo or any other instrument associated with jazz, but a ukulele! To illustrate the popularity of the instrument, Martin sold approximately 4,000 guitars in 1926, compared to 14,000 ukuleles. The company expanded its factory twice in the ’20s, thanks in part to booming uke sales.

Another indication of the continuing popularity of the ukulele was its growth into a family of instruments. The small dimensions of the standard uke (soon to be called “soprano”) begged for a slightly larger size to accommodate larger hands and a higher level of technique. In 1925, Martin met this demand with a “concert”-sized version of Style 1 called the 1C. The body width was 75/8″ (11/4″ wider than a soprano), and the scale length was 143/4″ (11/8″ longer than a soprano scale). In ’28, Martin introduced an even larger uke – the tenor.

Curiously, despite the popularity of the koa sopranos, Martin never officially offered a concert or tenor uke in koa. But it did make at least one concert-sized 3K – the instrument you see here. By this time (no earlier than 1925), the headstock ornament had been dropped.

The advent of the electric guitar in 1932 changed Hawaiian music from a jazzy acoustic ragtime style to the dreamy steel-heavy sound that endured well into the post-war years. The uke, though out of the spotlight, remained a symbol of Hawaiian culture, and the charming simplicity of its sound never lost its appeal. Martin last offered a koa uke in ’42, but kept the mahogany styles 1 and 3 – including the 1C concert – in production through ’94.

As interest in the uke began to rise again, thanks to such Hawaiian artists as virtuoso Jake Shimabukuro and laid-back vocalist Israel Kamakawiwo‘ole (Brudda Iz), Martin put the fancy 5K back in production in ’06, followed by Styles 3 and 3K in ’08, but to date, there is still only one known concert-sized Martin 3K.