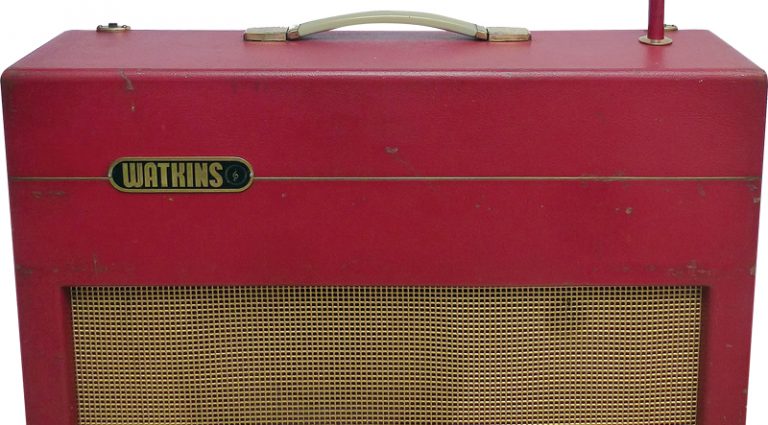 This could be just what every well-heeled young “Beat” guitarist and singer in Britain needed in the early 1960s – a guitar amp/PA with reverb, tremolo, mic stand, and tape echo all in one! We’re joking, right? Not in the least – although Joker-ing, we are indeed. Put your hands together for the Watkins Joker, funkiest rock machine we’ve ever seen.

Years before more-enduring British brands were establishing names for themselves, Charlie Watkins – following a wartime stint in the Merchant Marines and a shot at playing the accordion professionally – was catering to the needs of the burgeoning London skiffle/rock-and-roll scene. By the time this fanciful model came about in 1962, he had been marketing a little of everything the aspiring guitar star might require: guitars, amps, and tape-echo – the only effect that really mattered.

At the time, the British guitar scene was on a quest for volume that would soon be achieved with bigger, more-powerful amplifiers, and Watkins would prove the most significant pioneer of festival-sized PA systems in the U.K. – he was even summoned to court for disturbing the peace after putting together a 1,000-watt system (largest of its day) for the ’67 Windsor Jazz and Blues Festival, which featured the Small Faces, Cream, Fleetwood Mac, and others. But in ’62, your local dance-hall outfit generally still achieved vocal amplification by plugging into the combos that were also running guitars. In the mind of inveterate tinkerer Watkins, why not give kids everything in a one-handed package?

Even so, this ’62 Joker is more than just a Dominator and a Copicat tape-echo crammed into one box, and does appear to have been tackled as a ground-up design even if it borrowed from elements of those products. For one thing, where the Dominator – Watkins’ flagship amp at that time, featured here in March ’17– used a pair of EL84s to generate about 17 watts, the Joker pushed 25 or so (nominally rated at 30) from a quad of these thin British tubes. Vox had already upped the ante in the volume stakes by introducing the AC30 in ’59, and Selmer’s Selector-Tone Automatic of the same year was capable of 25 watts. It’s often said Watkins released its first 30-watt amps, the Control ER30 and Control HR30, in ’64, after a change to the snappier WEM logo. Here, though, we have an output stage in the Joker’s Power 30 Drive Unit that was already capable of keeping up with the Joneses.

Into this chassis the Joker blends three independent channels plus effects, each with its own Tone and Gain controls, with a button to send each via the echo effect, and tremolo on Channel One, all of which were housed in an upper chassis. And what’s this at the end of the control panel, beneath the tape loop? That’s right, a Master Control, (a.k.a. Master Volume). Next time that old chestnut comes up at your local tavern or some chat site and the wiseacres chime in to give “first master volume” credit to Dave Reeves’ mid-’60s Sound City/Hiwatt designs or Randall Smith’s late-’60s Boogies, you can trump the lot of ’em with your Joker.

As much as all of this already makes the Joker probe-worthy, the real novelty and “What the hell?” factor lies in its built-in Copicat. This sound had entered, even established, the pantheon of rock-and-roll tone as a built-in on Ray Butts’ Echosonic amp of the mid ’50s, so it’s entirely fitting that a British maker continued the trend; viewed from our 21st-century perspective, however, the notion of bundling such a cumbersome effect right into the amp seems wacky and utterly endearing. But it’s worth noting that, for all else he’d done to this point, the Copicat was by far Watkins’s greatest success of the early ’60s (and entire career, really).

As he told David Petersen for The Guitar magazine in 2000, Watkins experienced what might have been his most profitable brainstorm after a pair of customers returning from a visit to Italy in 1958 dropped into his shop and raved of an echo unit they’d seen being used by singer Marino Marini. Figuring Marini’s system produced its echo from a continuous tape loop, with the help of engineer Bill Purkis, he compacted it into a 12″ x 8″ box using a Gerrard gramophone motor for transport, adding a selector switch to tap its three replay heads, and devising a feedback loop that allowed a variable echo-repeat effect.

“I had a sample unit in the shop to see what the demand might be like, and in the meantime we built 100 units,” Watkins told Petersen. “The day I planned to put them on sale… I went to open up and the door burst open with the press of customers. I remember selling the very first one to Johnny Kidd (of Johnny Kidd & the Pirates, who had a #1 hit with “Shakin’ All Over” in 1960, replete with Copicat echo). Those first 100 sold that day.” To put an even more impressive number on the Copicat’s success, in the early 2000s, Watkins related how he sold “about 1,000 Copicats a month” in the first few years of the ’60s.

The Copicat’s functions were simplified for the Joker, but its inherently rich sound is all there, along with buttons to tap different play heads to achieve slapback and longer delays. This Joker’s former owner, British enthusiast/collector Julian Marsh, says it’s “a very tight and responsive amp – very positive to the pick. It’s a clearer sound than you get from a Westminster or a Dominator, probably because it’s built more like a hi-fi amp, with some versions having a tweeter and crossover. Apparently, Charlie thought it his best amp, but it’s a complicated circuit and was expensive to produce – hence the rarity – and it was also heavy and potentially fragile.”

Quirky as all get out, then, the Joker might have been the future of rock and roll. If not, well, it sure wasn’t for a lack of trying. 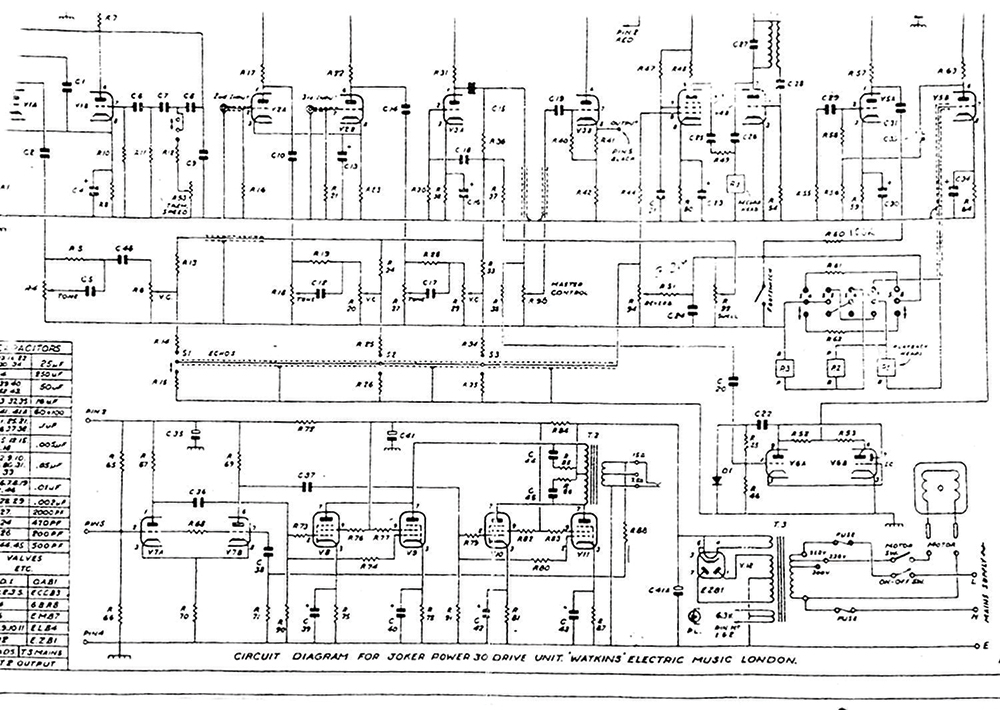