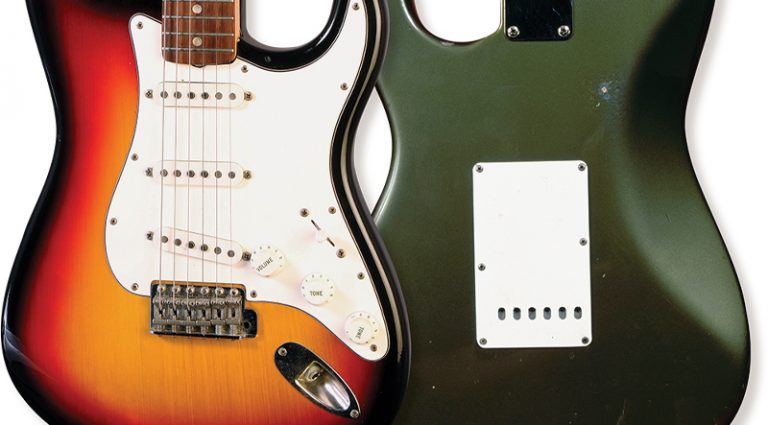 Believing the long-term survival of his company hinged on creating the world’s best electric guitar, in 1953, Leo Fender set out to improve on his own Telecaster before Gibson or Epiphone could take their shots at supplanting it atop the solidbody market. And from the moment it was introduced in ’54 – two cutaways, body carves, three pickups, and cutting-edge vibrato in place – his Stratocaster hit the mark.

Retaining certain elements of the Tele while jettisoning others, Leo’s second six-string Spanish guitar incorporated upgrades devised with input from those who really used an electric guitar – customers or staff, weekend warriors or touring pros. Among the changes were comfort-enhancing contours suggested by local player/part-time Fender employee Bill Carson, a body shape borrowed from the well-received Precision Bass developed by Leo and George Fullerton in 1951, and a vibrato Leo designed (and refined with a heavy push from Carson) to be part of the instrument, in contrast to the clumsy bolt-on Bigsby used by competitors.

Beyond the mechanical elements, two common complaints about the Tele centered on how its low E string often sounded louder than the others, and the pickups would feed back when the guitar was played at high volume, especially when the player was close to their amp. With these things in mind, he tested several new pickup designs that included coils of varying heights, widths, and impedance. He also tested polepieces with different lengths and diameters, and ultimately decided the new pickups would additionally forgo metal covers and elevator plates. And while he claimed the guitar was given three pickups simply because he had a surplus of three-position selector switches, others point to the fact Gibson had been using three on its popular ES-5 since 1949. Beyond that, though, each of Leo’s new pickups did a fine job rendering the tones he preferred – a clear ringing that, when used with the vibrato, sounded like a steel guitar. He had no way of knowing players would discover how placing the selector= between pickup positions (neck with middle, bridge with middle) would help the Strat produce sounds that would largely define electric-guitar tone, or how the Strat would impact the sound of popular music.

When Leo sold Fender to broadcasting giant CBS in early 1965, the company began to shift construction with an eye infamously more to the bottom line than to quality materials, fit, and finish.

The changes came slowly but immediately, starting in ’65 with white plastic three-ply pickguards replacing the “mint green” guards. That December saw the debut of larger pegheads. In late ’67, “F-stamped” tuners replaced the Kluson Deluxe units, and the “block” peghead logo came along in mid ’68 – the same year cloth-covered lead wires were replaced by those with plastic coating. In 1970, it was given capacitors with different values.

Finishes were changing, as well. In ’68, CBS discontinued thin nitrocellulose lacquer undercoats that had been used since the company’s inception and replaced them with polyester because it dried faster and harder. Nitrocellulose remained in use for color coats and top coats, but because as many as 10 to 15 polyester undercoats were applied, the result was a finish now known as “thick-skin.” This had the unintended effect of giving the neck pocket an extremely tight fit and eventually resulted in an enlarged pocket.

Among the most easily recognized features of a ’70s Strat is the Micro-Tilt system, which allowed neck angle to be adjusted in small increments using an Allen wrench through a hole in the neck plate; early Strats were adjusted using shims and a large dose of trial-and-error experimentation.

Brainchild of Leo himself, the Micro-Tilt was first used in ’71 – six years after he left the company but in accord with an agreement that required him to work in a consulting role through 1970. But it necessitated other changes, including installation of a metal disc recessed in the neck heel, creating a hard surface to work against the Allen screw. Unfortunately, the disc occupied some of the space necessary for the operation of the truss adjustment. Leo solved this by moving the adjuster to the peghead and placing a bullet-shaped chrome nut on the end.

For the Micro-Tilt to work properly, the neck joint had to move – a problem Leo solved by reducing the number of attachment bolts from four to three. Problem was, though, the new attachment (combined with the enlarged neck pocket) created a joint that was easily shifted with even slight pressure; players discovered the simple act of lifting the guitar from the case could cause the neck to shift, leaving either the first or sixth string hanging off the edge of the fretboard.

Many feel the Micro-Tilt was an excellent idea poorly executed in the mass-production environment; applications in later G&L and Fender guitars function very well thanks to better machined parts and closer woodworking tolerances.

In ’71, a second rectangular “butterfly” string tree was added to the peghead to create tension on the third and fourth strings. To accomplish this, the position of the original tree (on the first and second strings) was shifted slightly toward the end of the peghead. The change in tension on the first four strings gave the guitar a different playing feel. Prior to 1970, the vibrato had a separate bridge plate and inertia block. That year, though, Fender produced a single die-cast Mazac part to replace the two individual steel parts. At the same time, the original steel saddles were replaced with Mazacs. These changes affected the manner in which string vibration was transferred to the body, producing a Strat that sounded different, as well.

The ’70s also saw significant changes in pickup construction. By late ’74, CBS replaced the staggered-height polepieces with smaller, flush poles that reacted differently – in some ways like earlier, more-primitive pickups. Also, the company’s cessation of wax-potting and changes in wire gauge and coating  made the pickups more microphonic and subject to feedback.  Again, these were steps backward.

Not all the electronics changes were bad. In ’77, a five-way pickup selector became standard, allowing players to combine the bridge and middle pickup or the bridge and neck pickup to re-create the “out of phase” sounds made popular by Eric Clapton. Prior to this innovation, it was necessary to balance the selector switch arm at what were called “in-between” positions to achieve this effect. Many players had older Strats retrofitted with five-position switches, relegating the original to the case pocket, where many are still found today.

One aesthetic change some players found pleasing was a black plastic pickguard introduced in ’75, at first only with guitars given the Mocha Brown finish and usually combined with white knobs, pickup covers, and vibrato-bar tips. Guitars made in the later ’70s sometimes have all-black plastic parts, and the decade also saw a change in body contours – generally rounder, with less-dramatic curves and variations in the back contour.

It’s generally agreed the quality of most American-made fretted instruments from the ’70s is not as good as earlier eras; in terms of collectibility, Strats from the era typically command a third to a quarter of the value of earlier examples. This scenario contributed greatly to the rise of vintage-instrument stores in the last decades of the 20th century. In that light, the quality of a Strat from the ’70s is no different from any Martin or Gibson of the era. However, every generation has its nostalgia, so while Strats made in the late ’60s to mid ’70s are not of pre-CBS quality, they were in fact used to create great music (see this month’s feature on Ritchie Blackmore and the making of Deep Purple’s Machine Head) and have a degree of appeal among Gen X’ers and Millennials.