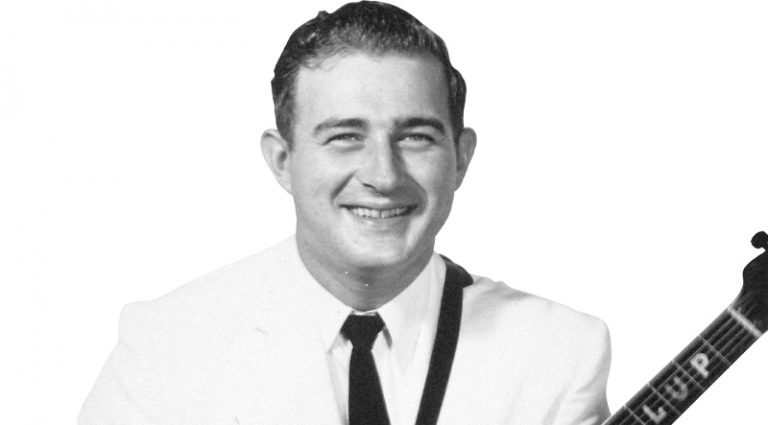 There was a custom at Owen Bradley Film & Recording Studios in Nashville; artists cut vocal tracks with backing from Bradley’s crack team of session musicians including guitarists Grady Martin, Hank Garland, and Harold Bradley. The artist’s bandmates stayed home or watched from the sidelines.

The A-team was in place on May 4, 1956, when Capitol Records producer Ken Nelson came to the studio with his new signing, a kid named Gene Vincent. After hearing a dub of Vincent and his band playing an original song called “Be-Bop-A-Lula” during a performance at WCMS radio, he’d decided to break from the norm and let them do the session as a group. As Vincent’s group tore through “Race With The Devil,” Nelson and engineer Mort Thomasson heard the guitar work of Clifton Elwood Gallup – fleet-fingered intro, dazzling backing riffs, and virtuosic solo – they reportedly told the A-team, “Go on home…” With his Gretsch Duo Jet, Gallup had suitably hot-rodded Vincent’s sound.

That June, Capitol released “Woman Love” as a single by Gene Vincent and His Blue Caps, backed by “Be-Bop-A-Lula.” But it was that B-side that became an instant hit – and gave the label its answer to RCA’s Elvis Presley.

He was born June 17, 1930 in Norfolk, and began playing guitar when he was eight years old. He later worked as a maintenance man for the Norfolk County school system, then by night played in bands – Ricky and the Dixie Serenaders, the Phelps Brothers, and WCMS house band The Virginians. A fan of both Chet Atkins and Les Paul’s country and jazz playing, he brought their influences to rock and roll.

In perhaps the only interview Gallup ever granted, to Dan Forte in 1983, he talked of his early inspirations.

“I started on electric when I was 12 or 14,” he said. “That’s been so many years ago, I don’t even remember what brand my first [guitar] was. I think I got it from Sears & Roebuck…

“There were a few guys that showed me a few chords or a lick, so to speak. Like most musicians, you listen to a lot of people – pick up a lick here, a lick there. Pretty soon you originate some kind of a style. I kind of thought Les Paul was the going thing in my younger years, and I used to listen to a lot of Atkins stuff when he first started.”

When WCMS manager “Sheriff” Tex Davis first heard Vincent – still known then by his original name, Eugene Vincent Craddock – for the station’s talent show, he heard a star in the making. Davis organized the Virginians with Gallup on guitar to play behind him, then cut the dub of “Be-Bop-A-Lula” that set things rolling with Capitol.

Gallup told Forte about his early meeting with Vincent: “He was living a couple of miles from me, out in the country. I had met him over at the radio station a few times where I staffed. I guess that’s how I came to know him. It was primarily country music, and everyone would meet at the radio station and play on Sunday afternoons. Then we cut a dub at the station. Presley had come out on Sun Records and Carl Perkins had ‘Blue Suede Shoes,’ and Capitol didn’t have a rock artist. So we sent this dub to Capitol, and it got picked out of a thousand-some tapes. That’s how it all began.”

With the success of “Be-Bop-A-Lula,” Nelson called Davis’ fledgling star and his band back to the studio. From June 24 through 27, the Blue Caps cut another 17 masters. Combined with the May 4 session, Capitol culled the tracks to fill out Vincent’s first LP, Bluejean Bop!

Bradley Film & Recording Studios was in a two-story house at 804 6th Avenue South in Nashville and the first studio on what became Music Row (Bradley’s famous Quonset Hut was later erected behind the house).

Rockabilly historian Deke Dickerson explains the studio was built in the basement, with the first floor’s flooring removed to increase space. A utility room was converted to an echo/reverb chamber.

Bradley primarily recorded country acts, but had cut a few other rockabillys including Johnny Carroll, Roy Hall, and Bobby Helms. When Johnny Horton recorded there in January ’56, he followed Bradley’s protocol in using the A-team, resulting in Grady Martin’s legendary guitar work on his sides.

For the Vincent sessions, Gallup played his ’54 Gretsch 6128 Duo Jet with DeArmond DynaSonic single-coils. The guitar had an optional fixed-arm Bigsby B3 plus a compensated aluminum bridge instead of the Melita used with the standard tailpiece.

Gallup bought the 6128, serial number 15654, from South Norfolk’s Music Center on November 8. The sales agreement listed its cost at $274.50; after trade-in and finance charges, Gallup paid 15 monthly installments of $15.20 each, and it’s important to stress that it was indeed a 1954 model. Many have speculated it was a ’55 or ’56, but Gallup’s receipt, the serial number, and the guitar’s details (location of the logo on the pickguard, the big block fretboard inlays, and more) all point to its actual vintage.

In the studio, Gallup recalls using Grady Martin’s amp for at least one unspecified session, which at the time was likely a Standel 25L15 – a 25-watter with a 15″ Lansing. However, there are photos showing Gallup plugged into a tweed TV-front Fender Pro. Otherwise, it remains unclear which amp he used on which sessions or which days, but he does recall playing dry and direct, with no effects; the sumptuous echo on the final recordings were thanks to engineer Thomasson in the control room using Bradley’s Ampex tape recorders – likely a combo of Models 300, 350, or 351.

As he explained to Forte, Gallup played using a combination of a straight pick held between his thumb and index finger and two fingerpicks on his middle and ring fingers.

“Most people don’t do that,” he said. “In fact, I don’t think I’ve ever seen anybody do that… And I use the [vibrato] bar with my little finger.”

Hanging Up His Blue Cap

With “Be-Bop-A-Lula” climbing the charts, Vincent and the Blue Caps set off on a six-week tour with Johnny Burnette and the Rock and Roll Trio and the newly crowned “Queen of Rock and Roll,” Lillian Briggs. Vincent’s debut LP landed in August, followed by a single of “Race With The Devil” released in October.

“Most of [the songs] were worked out on the road,” Gallup told Forte. “A couple of songs I wrote with Gene. They were written one night and recorded the next day.” And for live gigs, he played that Duo Jet through a tweed Fender.

Gallup quit his day job but found life on the road “pretty tough.” At 26, he was five years older than the rest of band. Plus, he was married and his wife, Doris, had a baby on the way (Vincent was newly married, as well, to 15-year-old Ruth Ann Hand – a fact kept hidden from the public). In the autumn of ’56, Gallup resigned from the Blue Caps. His daughter, Bonnie, was born in the new year. “I’m the reason Daddy left the Blue Caps,” she told VG.

At the same time, Vincent’s star kept rising. He and the band had a cameo in the proto-rock-and-roll film The Girl Can’t Help It, starring Jayne Mansfield and including Fats Domino, Little Richard, and Eddie Cochran. In Gallup’s place, Russell Williford donned a blue cap and picked his ’52 blackguard Esquire.

For the band’s next session at Bradley’s, October 15-18, 1956, Davis lured Gallup back to play lead; Williford said Davis wanted to retain the sound from the first LP, so Williford didn’t play on the album, but continued to tour (and would later buy a ’50s Duo Jet of his own, in emulation of Gallup). The group cut another 15 masters that were whittled down to shape Vincent’s second LP, Gene Vincent and His Blue Caps, released in March ’57.

At the Blue Caps’ next session that June, at the Capitol Tower in L.A., he was replaced by Johnny Meeks.

Straight Down the Middle

Legend has it that Capitol’s Ken Nelson offered Gallup a contract of his own, but he politely turned it down. By the end of ’56, he was home in Norfolk doing maintenance work for his local school system, a job he would hold for the next three decades. But he never stopped playing guitar; he played local gigs with his band, The Four C’s, and served as house musician for a local radio station.

“Daddy was a cool, mild-mannered man,” Bonnie remembers. He was never interested in the spotlight and was shy about fame or attention connected to his songs with Vincent.

Gallup continued to use his Duo Jet for a time. He was an accomplished woodworker and electrician – he even built his own cruiser-style boat and made a new fretboard for the 6128, inlaid with his name.

In the early ’60s, Gallup sold his original 6128 to fund a double-cut Gretsch Country Gentleman. He played the Gent on the Four C’s sole album, Straight Down the Middle, released on the local Pussy Cat label. The band played a funky instrumental version of “Be-Bop-A-Lula,” covered “Girl From Ipanema,” and two Gallup originals.

In the decades after her father’s death, Bonnie Gallup loaned his Country Gentleman to the Rock and Roll Hall of Fame, where it’s on show today. She remembers he built a homemade tape echo unit, likely in the late ’50s; not thinking it would ever be worth anything, she later sold it at a yard sale. The price? $1.

“We found photos of Cliff during the early 4C’s period posed with his Duo Jet, name on the fretboard appearing somewhat homemade with the letters positioned between frets to simplify fabrication. As we found only the one receipt for a Duo Jet, it’s my theory Cliff owned only one guitar. Its last known location was in the Nashville area, with a childhood friend named Lowell who told us he bought the guitar from Gallup for $200 in the early ’60s and confirmed it did not have a name inlaid. My theory is Cliff removed the original fretboard and replaced it with one made in his wood shop. Eventually looking to sell the guitar, he must have figured he’d have better luck without his name on it.

“For years, the guitar was stored in a hall closet at Lowell’s home. One day, he returned from work to find a drum kit in the living room. When he confronted his son, who was living with him and didn’t have a job, the son replied he had traded ‘that old guitar’ in the closet plus a little money. Lowell kicked him out of the house and hasn’t spoken to him since.”

Gallup’s playing on Vincent’s first two LPs ensured rock-and-roll guitar would never be the same. Combining the fire and brimstone of Chuck Berry with the musical smarts of Les Paul, its influence still echoes today – even if his famous Duo Jet has disappeared for now.

Thanks to Bonnie Creef, Joe Carducci, Morgan Brunner, Adam Bowden-Smith, along with Russell and Rusty Williforde.