Riding high after 35 years with an array of original instruments, an impressive artist roster that started early with Pete Townshend and Mark Knopfler, and a line of high-gain amplifiers, Schecter Guitars has come full circle.

Established as Schecter Guitar Research by David Schecter in 1976, the company began repairing guitars and selling parts to fit the latest offerings from Gibson and Fender, which were largely failing to strike players’ fancies. An innovator in pickup winding and coil tapping, Schecter eventually began selling replacement bodies, necks, and all the parts a player needed to assemble their own guitar. The concept shifted the guitar zeitgeist and helped push customizing to the forefront – Eddie Van Halen used a couple of well-known “parts guitars” – and a few repair shops even became quasi builders, using parts from Schecter (or Warmoth, et al) to help those who didn’t have the time, tools, or inclination to assemble a guitar on their own.

By ’79, Schecter Guitar Research was building its own instruments, widely viewed as better variants of Strats and Teles. Production was initially limited, but demand pushed the company to establish more than a dozens retail stores in North America. That growth caught the attention of a group of investors from Dallas, and in 1983, production (sans most of the builders from California) moved south. Still offering Fender copies, the company shifted to all-out mass production, and its reputation suffered somewhat from the same ills of its big-brother predecessors – quality control being the primary knock. Sales lagged, and by ’87, the boys in Big D decided to bail, selling the brand to Hisatake Shibuya, owner of ESP Guitars. Grabbing the reigns, Shibuya did an immediate about-face, initially taking Schecter back to just a couple guys building high-end customs in L.A. One of the brand’s remaining few retail outlets was another Shibuya interest, Sunset Custom Guitars, which employed a guitarist named Michael Ciravolo.

“I had been working at Lab Sound, a music store on The Strip,” he recalled. “But, when it changed ownership, I was suddenly in need of a day job! I was hired to manage Sunset Custom, which was the sister to the famous store on 48th Street in New York City. We carried racks full of guitars with brands like Tom Anderson, Schecter, and Valley Arts. We were also Schecter’s U.S. headquarters at the time, so I split my time between the store and doing sales for Schecter International.”

Ciravolo was in the right place at the right time as the company began a return to significance. Its director resigned not long after his arrival, and Ciravolo was chosen as his successor. Though he had no formal business training, Ciravolo brought knowledge and ideas, and Shibuya let him run with it. Coincidentally, Ciravolo’s wife, Tish, was expecting a baby.

“Until then, my life had been about chasing the illustrious record deal,” he said. “But, it struck me that I had to take advantage of the opportunity, and I am eternally grateful to Mr. Shibuya for giving a longhaired guitarist from New Orleans the opportunity to reinvent a brand.”

In the years that followed, Schecter expanded its operations and staff, and introduced several original models beginning with the S series, then – with considerable input from Ciravolo – the Tempest, Avenger, Hellcat, and others. In the late ’90s, the brand experienced a resurgence thanks to its guitars finding favor with players in the heavy, post-punk music of the era, propelled by its seven-string models and others suited to the look – and especially the sound – of the genre’s alternate/lower tunings.

More recently, Schecter began elevating the profile of its Custom Shop. The renewed focus started with machinery and the hiring of John Gaudesi, who for a decade had been a key player in research and development of guitars at Yamaha. “I had known John for a long time, and he brought a wealth of knowledge,” said Ciravolo. “He started in the early ’80s at Charvel, and the moment John joined, we no longer simply dabbled in custom building – we had the basis to build a real, true guitar factory.”

“I had speculated on taking on a venture like this for many years,” Gaudesi said. “It’s exciting, being part of this team, especially under the leadership of someone who is not afraid to do things right the first time.” 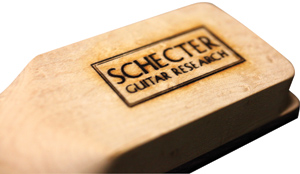 In March of 2012, Schecter moved the Custom Shop to a dedicated 14,000-square-foot building in Sun Valley.

“It is really inspiring to walk through that shop now,” Ciravolo said. “It looks, smells, and feels like what I imagined the Schecter facility did in the early Van Nuys days – a cool combination of high-tech and low-tech, with all the work being done by guitar players.”

The Custom Shop is divided into two sections – one for the USA Production line, which includes several models that can be dressed with a handful of custom options, and the Masterworks division, where a Master Builder creates one-off, custom-order guitars from start to finish using more-traditional techniques and machinery. “Masterworks can provide the discerning player with their dream guitar – bolt-on, set-neck, neck-through, six, seven, eight or more strings, doublenecks, chambers – the options are truly endless,” said Ciravolo.

The USA Production side, meanwhile, employs craftsmen skilled in many aspects of the process along with specialists who focus on various phases. Gaudesi uses two computer numerical control (CNC) machines to rough-shape bodies, carve routes, and rough-in neck blanks, fingerboards, and inlays. Necks are sanded, and inlays and frets installed before the pieces move to Jose Rosas, who does final prep on bodies for finisher Rafael Barrajas, who applies paint and a thin polyester finish in the spray booth. Once dry, finishes are leveled and buffed before the bodies and necks move to Shigeki Aoshima, in assembly. “This is where the real magic happens,” said Ciravolo.

He also still points proudly to the company’s hand-wound pickups. “They were really the birth of Schecter Guitar Research,” he said. “Many features pioneered by David Schecter in the mid ’70s are standard on many of today’s popular pickups. It’s truly exciting to be able to reverse-engineer and re-create some of the classic pickups from our past – the SuperRock, MonsterTone, and Z-Plus – and design new and innovative models.”

The staff includes about 40 guitar players that serve as an essential built-in focus group. “There really aren’t any models, pickups, and custom touches we have not tried ourselves,” Ciravolo said.

There was a time where Schecter was perceived as merely building “expensive Strats” (or Teles). How does Ciravolo react when someone tosses that generalization in the direction of his Custom Shop instruments today?

“In the genius of David Schecter, that wasn’t just perception, it was fact,” he said. “Schecter Guitar Research spearheaded the golden era of hot-rodding guitars – at the time, no self-respecting guitarist would play a stock, off-the-shelf instrument, and ’70s instruments were not looked at as collectors’ items, but as sub-par guitars in need of replacing everything.

“When I took over as President, I knew we had to shed the image of ‘kit’ guitars and ‘expensive Strats’ if we were going to compete. And we never stopped building U.S.-made instruments; for awhile it was essentially a two-person operation building two or three instruments per month, but the inception of our Diamond Series instruments in 1997 overshadowed those efforts while simultaneously changing the industry standard of what an ‘import guitar’ could be. We set the bar high with innovative designs and the addition of high-quality U.S.-made components like Seymour Duncan, EMG, and TonePros.”

“I am very honored to be a part of this new venture for Schecter Guitars,” added Gaudesi. “It’s a nice combination of the right team, state-of-the-art technology, and hand craftsmanship that truly brought high quality and an affordable custom instrument, made in the USA, back to the forefront.”

“To set our new path, I purposely distanced us from Schecter’s superstrat era. Now, with the rebirth of our Custom Shop, we are giving a nod to our early history and the guitars that have spawned a lot of other well-known brands.

“In my 20 years of knowing Mr. Shibuya, even with the success we have had in putting Schecter in the ranks of the world’s top electric-guitar companies, I have never seen him light up like he did when he first saw our new shop in Sun Valley. He said, ‘This is something I always wanted to see!’ For me, that was enough!”