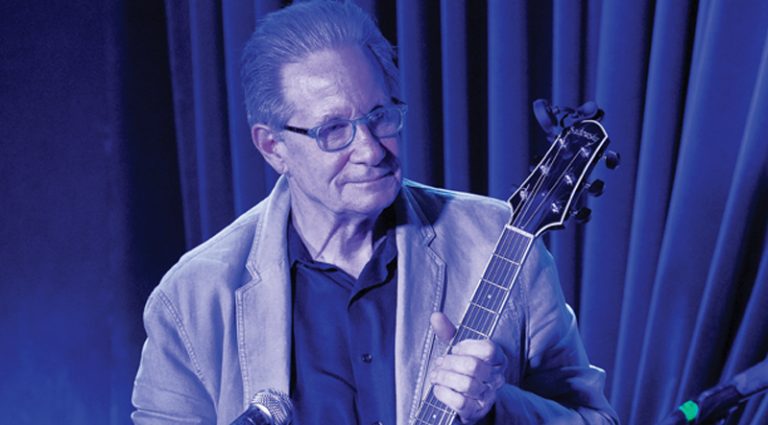 Every noted jazz artist in the world is familiar with Vic Juris. His body of work commands serious respect and admiration from today’s music cognoscenti.

A child of the ’60s, he grew up bombarded with great music – the Beatles, Hendrix, Coltrane, Wes Montgomery, Chuck Berry’s records on Chess. He recalls its tremendous appeal and how it spurred him to pick up the guitar.

“My first guitar was a Harmony Monterey,” he said. “Then I graduated to a National electric and a Magnatone amp. At age 11, I began studying with Ed Berg, who hipped me to Barney Kessel, Jimmy Raney, Django Reinhardt, Jim Hall, and especially Johnny Smith. Ed had gotten one of the last guitars made by John D’Angelico. I’ve never heard a guitar sound like that.

“My teachers were among the best anywhere,” he added. “In addition to Ed, I was lucky to have greats like Lou Mecca, Joe Cinderella, and Pat Martino mentoring me. Even Tony Mottola lived just two blocks away.”

During a succession of garage bands and local rock gigs as a teen, a friend turned Juris onto Howard Roberts’ early Capitol albums, H.R. is a Dirty Guitar Player and Color Him Funky.

“I bought all his records, even later stuff with his more-progressive things like Antelope Freeway and Equinox Express Elevator. And I found Hank Garland’s Jazz Winds from a New Direction, with Joe Morello and Gary Burton. I think Gary was only 16 at the time. That was a real landmark record for any aspiring jazz guitarist.”

Juris further cites Larry Coryell’s early recordings, the Beatles’ Rubber Soul, Jimi Hendrix’s Are You Experienced?, and Dynamic Duo by Wes Montgomery and Jimmy Smith as having profound impact on him.

Juris has always made his living as a guitar player.

“In the ’70s I learned so much from working my way up through organ trios, like Pat Martino did. In fact, Pat recommended me to Don Patterson and I played an ongoing gig with Jimmy Smith, and also worked with Wild Bill Davis.”

In addition, he helped perpetuate the prestigious line of guitarists who worked with drummer Chico Hamilton, whose bands always featured a hot young guitarist; Howard Roberts, John Pisano, Jim Hall, Gabor Szabo, Dennis Budimir, and Larry Coryell all got their starts with Hamilton, and Juris later taught alongside him at The New School for Jazz and Contemporary Music. Today, students can avail themselves of Juris’ teaching expertise at The New School as well as at Rutgers University and CUNY Purchase.

The Juris discography as soloist and sideman includes more than 200 recordings including sessions with Nancy Wilson, Sarah Vaughan, Mel Torme, two duet albums with Phil Woods, regular appearances with Larry Coryell, albums with James Moody and a live Carnegie Hall recording with Biréli Lagrène among many others.

“I even got to work with Dizzy Gillespie in a couple of All-Star configurations,” Juris said. “He was so wonderful to play with and a great teacher. I’m so happy I got to ask him some technical questions about his tunes.”

In addition, the guitarist routinely mines our greatest composers for his recordings. He admires compositions from everyone from the Beatles to Marvin Gaye and many more, but strongly favors the Great American Songbook old guard like Victor Young and the iconoclastic and enigmatic Alec Wilder.

“The first Alec Wilder song I remember hearing was ‘Moon and Sand’ recorded by Kenny Burrell in the ’60s on Guitar Forms. The arrangement was by Gil Evans and I thought it was the most beautiful song ever. Then I heard ‘I’ll be Around’ and later the waltz that Wes Montgomery recorded, ‘While We’re Young.’ When I record a tune, I do my homework and always think of the lyric and try to listen to several versions.”

Today, Juris is using a Roger Sadowsky semi-hollow and a Fuchs Jazz Classic amp with 12″ speaker. There’s an Earthquaker Dispatch Master for reverb and delay as well as a few Boss pedals like the Super Overdrive, Terra Echo, and DG-3 delay. Also in the arsenal is a Godin nylon-string Grand Concert and a Martin OM steel-string.

Juris works with drummer Adam Nussbaum and bassist Jay Anderson in his trio, which plays the first Sunday of each month at The 55 Bar in New York City. His solo concerts include master classes that encourage and inspire young players. He’s proof that dedication and talent can realize an extraordinary career payoff.